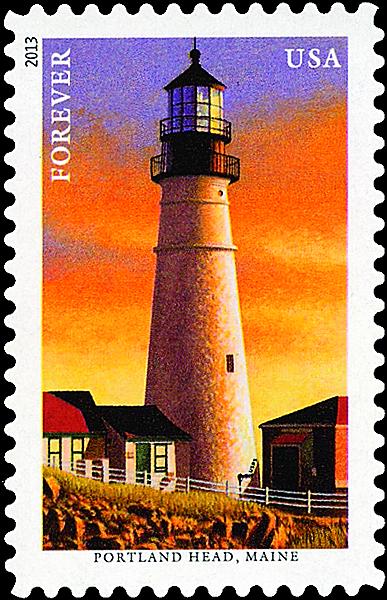 The cartoon caption contest stamp for September is this Portland Head Lighthouse stamp from the 2013 set of New England Coastal Lighthouses stamps. The rules to enter the contest are in the accompanying article. Entries must be received at Linn’s by Sept. 22. 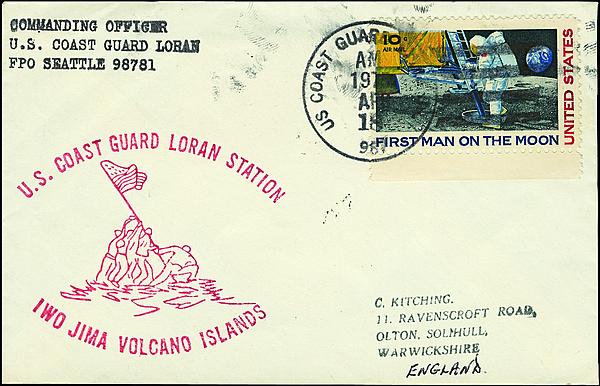 This international airmail cover was probably sent from Iwo Jima to England in 1975 after Iwo Jima was returned to Japan. It was sent from the commanding officer of the U.S. Coast Guard’s LORAN station, via military mail and required 20¢ postage. An additional 10¢ stamp is affixed and canceled on the back flap. 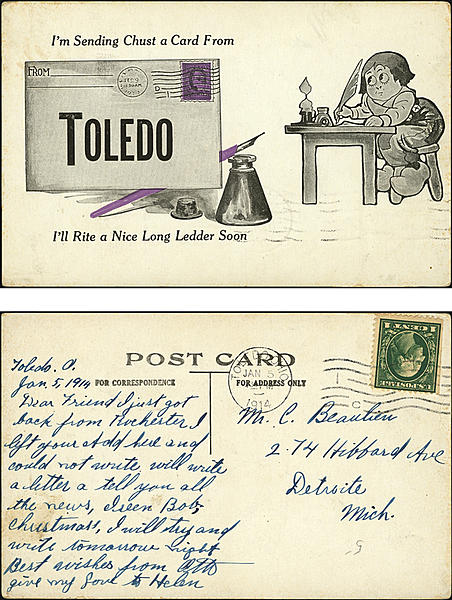 Postcards such as this must have been used from many locations across the United States in the pre-World War I years.

Postcards that bear images of United States stamps have been popular for many years. I am especially fond of those that feature a design showing an envelope franked with a stamp modeled on the George Washington types of 1908-22.

I have 10 of these, eight of which are canceled. They seem to have been widely available, based on the towns named on the front of the cards. Also, the canceled cards give evidence that they were available in the 1913-14 period.

The example pictured here is from Toledo, Ohio, and has the stamp colored purple. The others in my accumulation are from Atlanta, Ill. (stamp in red); Great Valley, N.Y. (purple, yellow and green); New City, Ill. (yellow); Williams-town [no state named] (orange); Whittamore [no state named] (orange); Paradise Valley, Nev. (purple); and one that is blank, in green, addressed to South Dakota.

Each card has a slightly different message printed above and below the pictured envelope, and a different illustration at right.

I would be interested in receiving reports and photocopies of other examples. If you can help, please contact me, John Hotchner, Box 1125, Falls Church, VA 22041; or by e-mail at jmhstamp@verizon.net.

Earlier this year, the Feb. 17 U.S. Stamp Notes column featured a 1972 cover sent from the U.S. Coast Guard LORAN (Long Range Navigation) station on South Bird Island, near Iwo Jima. The ZIP code in the return address was 98762. Since then, another example has come to hand: a 1975 cover with a different cancellation and a different cachet.

This cancel is a classic round dater showing “U.S. Coast Guard” and an unreadable number of five digits that seems to start with “17,” which I believe would be a military post office number. A three-digit ZIP origin in the cancel is “987,” which accords with the return address ZIP code 98781.

Where precisely this was sent from I do not know, but it was sent in U.S. military mail, so the postage to be paid at that time was the normal 20¢ international airmail rate to the addressee in England.

The 10¢ paid on the front is matched by another 10¢ First Man on the Moon stamp affixed to the back flap and postmarked.

This had to be sent by military post, as by 1975, these formerly Japanese islands had reverted to Japan, and civil mail would have required Japanese stamps. No doubt the cachet — showing the flag raising on Iwo Jima’s Mount Suribachi during WWII — would have at best annoyed Japanese authorities, if this had been sent in civil mail.

There are many Lighthouse stamp fans, as proven by the popularity of the several sets of Lighthouse stamps that the U.S. Postal Service has released since its first set of five 25¢ stamps in 1990.

But how many of us think about the folks who operate lighthouses?

It is said that the life of a lighthouse keeper is a lonely one. That may have been true at one time, but with new technology, some of the more modern and updated lighthouses are family friendly and quite comfortable. And of course, not all lighthouses double as home for the keeper.

The work itself may be somewhat unusual, but it is vital. Perhaps the biggest downside is the need to be on duty regardless of the weather and any danger it may bring.

I have selected the Portland Head lighthouse from the July 2013 New England Coastal Lighthouses set as the cartoon caption contest stamp for September. Put yourself inside the lighthouse and tell me what you might be thinking about the work, living near the water, the Lighthouse stamps and stamp collecting, fishing, or any other aspect of the keeper’s existence.

For each winner, the prize will be the book Linn’s Stamp Identifier, published by Linn’s (a retail value of $12.99), or a 13-week subscription to Linn’s (a new subscription or an extension). To be considered for a prize, entries must reach Linn’s no later than Sept. 22.