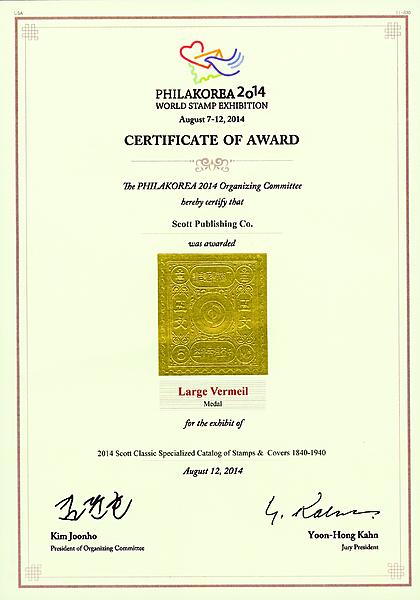 This certificate of award from the Philakorea exhibition shows that the 2014 Scott Classic Specialized Catalogue of Stamps and Covers 1840-1940 received a large vermeil in the literature competition held during the show, which ran Aug. 7-12 in

We are pleased to report that the 2014 edition of the Scott Classic Specialized Catalogue of Stamps and Covers 1840-1940 received a large vermeil medal in the literature competition at the recently concluded Philakorea show.

Dan Walker, who served as one of two national commissioners from the United States, informed us of the result Aug. 9.

Overall, the Scott Classic specialized catalog received a total of 87 points out of a possible 100. This point total was just three points shy of the 90 required for a gold medal.

Illustrated here is the Philakorea certificate acknowledging the large vermeil award. Scott also received a quite handsome medal, which is not shown.

In international philatelic literature competitions, medals are awarded based on points received in the following categories: treatment of contents (40 points possible); originality, significance and depth of research (40); technical matters (15); and presentation (5).

For treatment, Scott received 34 out of 40 points. In the category of research, 35 out of 40 points were awarded. The technical score was 13 out of 15, and presentation was 5 out 5.

Given the intense level of competition at an international show, a large vermeil is an excellent showing.

Indeed, this is an important recognition for a catalog that many collectors and dealers regard as the best single-volume reference work of listings and values for classic-era stamps.

So why enter such a competition in the first place?

In recent years, the rules in philatelic literature competitions have evolved to give catalogs and other reference works a more level playing field when going up against scholarly works and other traditional publications.

But perhaps the biggest reason for our decision to test the international waters was the opportunity to introduce the Scott Classic specialized catalog to a larger audience.

Specifically, we seek to expand our reach beyond our traditional customer base here in the United States.

We took a big step in that direction when we announced last week that the Scott catalogs are now available as e-books for Android and Apple mobile devices, including the iPad and iPhone, as well as Windows and Mac desktop and laptop computers.

The catalogs are offered through the newly opened Scott Catalogue Bookstore. To find it, point your web browser to www.scottonline.com.