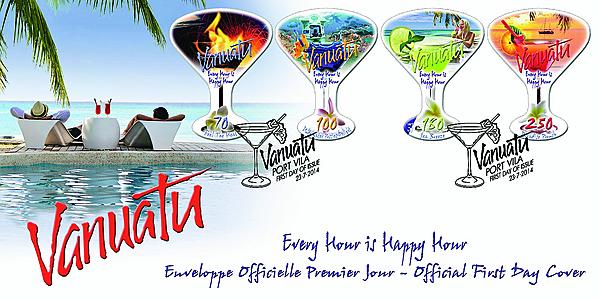 The four stamps in Vanuatu’s July 23 Cocktails in Paradise set are shown here on a first-day cover created by Vanuatu Post. 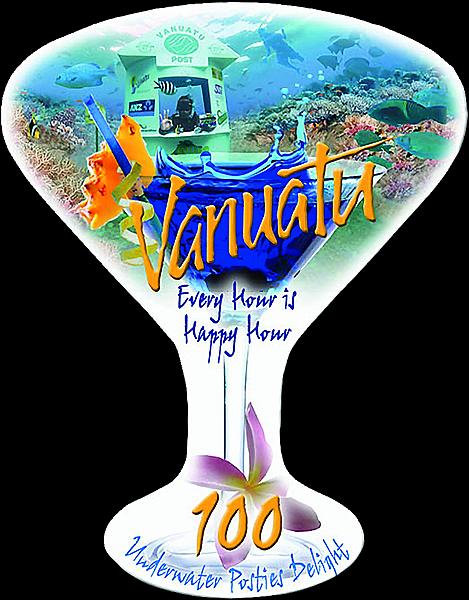 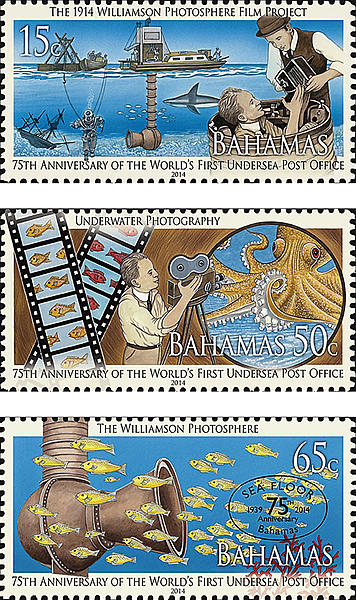 Three stamps in the Bahamas’ Aug. 16 set commemorating the first undersea post office feature the 1914 film project of the Williamson brothers, their underwater photography and the photosphere from which the photographs were taken. In 1939-40, th 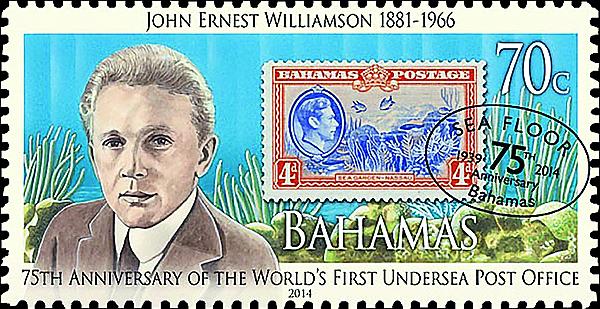 A stamp from the Bahamas honors the 75th anniversary of the world’s first undersea post office and the pioneering underwater photography work of John Ernest Williamson. One of his photographs was the basis for the 4¢ stamp shown in the stamp

According to information from Pobjoy Mint, the new-issue agent for the Bahamas, the set of four stamps also honors the 100th anniversary of the first motion pictures filmed underwater.

The design of the 70¢ high value of the set includes a portrait of Williamson, a stamp-on-stamp design and an oval marking that notes the post office’s anniversary.

The marking is based on the “Sea Floor Bahamas” postmark used on mail posted there in 1939 and 1940. This mail often was franked with the 1938 4-penny King George VI stamp showing the Sea Gardens at Nassau, based on a photograph taken by Williamson (Scott 106).

In 1913, newspaper reporter and photographer Williamson and his brother George adapted a diving bell invented by their father, Charles Williamson of Norfolk, Va., for use in taking photographs underwater. They called it a photosphere.

The brothers were inducted into the International Scuba Diving Hall of Fame in 2009. Their entry on the hall of fame’s website begins: “The inductees for this new category of Early Pioneers are George and J. Ernest Williamson. In 1912, they modified an invention of their father’s into an underwater viewing sphere for underwater film production.

“Artificially illuminated photographs of the depths of Chesapeake Bay taken in 1913 produced such captivating results that [J. Ernest] Williamson was inspired to attempt motion pictures. With this new equipment, Williamson and his brother George set out for The Bahamas, where the sun­light can penetrate 150 feet deep in clear water, greatly enhancing photographic possibilities. In March 1914, near Nassau, Williamson shot the first-ever underwater motion pictures.”

On the 15¢ stamp, George is handing a camera to his brother, who is inside the photosphere. In the center of the stamp’s design, the photosphere is shown attached to a ship.

The ship was named Jules Verne, and the brothers’ underwater film was called Thirty Leagues Under the Sea. The shark shown in the center of the stamp’s design also played a role in the film. The Pobjoy Mint press release says: “The climax was Williamson’s fight with a shark, which he killed with a knife while remaining under the camera’s range.”

Other underwater photography by the Williamson brothers is represented on the 50¢ stamp. Their version of Verne’s Twenty Thousands Leagues Under the Sea was filmed underwater in the Bahamas in 1915 and released in theaters the following year.

The documentary With Williamson Beneath the Sea, which features J. Ernest Williamson, his wife and their young daughter, was released in 1932. This film was later restored by the United States Library of Congress.

In conjunction with the Bahamas-Williamson Undersea Expedition in 1939, the Bahamas authorized the use of the photosphere as the first undersea post office.

Derek Miller designed the four new stamps. Lowe-Martin of Canada printed them by offset in sheets of 20.

The South Pacific nation of Vanuatu has commemorated its underwater post office on several stamps since it opened for business in May 2003 at a depth of about 10 feet in the Hideaway Island marine sanctuary. The first such stamp was issued Sept. 24, 2003 (Scott 837). The most recent stamp is shown here.

This 100-vatus stamp is part of a set called Cocktails in Paradise, and all four of these self-adhesive stamps are shaped like a cocktail glass. The first-day cancel also depicts a cocktail.

Each stamp includes the inscription “Every Hour is Happy Hour.”

The aforementioned 100v stamp also is inscribed “Underwater Posties Delight.” On its website www.vanuatupost.vu, Vanuatu Post “encourages visitors to literally look below the surface of this beautiful country and grab a mask, fins and snorkel, and visit the Underwater Post Office. They guarantee you will discover unlimited fun and unforgettable adventures!”

An erupting volcano is pictured on the 70v stamp in the Cocktails in Paradise set. The inscription reads, “Feel the Heat.”

Names of cocktails are inscribed on the other two stamps with “Sea Breeze” on the 180v denomination and “Paradise Punch” on the 250v. The designs also show photographs of a woman on the beach enjoying a cocktail and a boat at sunset, respectively.

In addition, the 180v stamp includes a small image of an airplane and “Int” for “international” to the left of the denomination on the base of the glass.

Denise Durkin designed the Cocktails in Paradise stamps. Southern Colour Print of Dunedin, New Zealand, printed them by offset in sheets of 30. Each stamp measures 41 millimeters by 32mm.