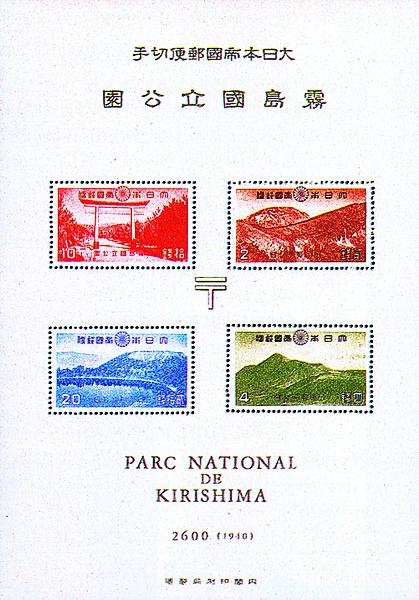 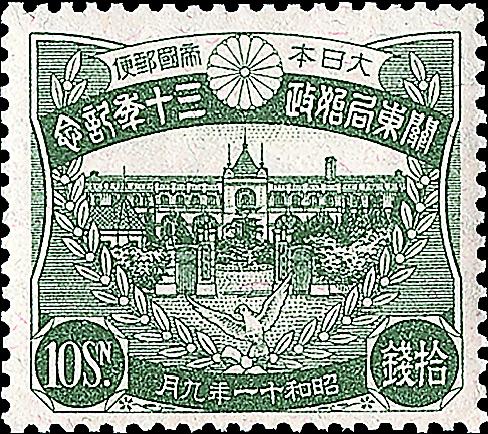 The 10s dull green stamp showing the headquarters of the Kwantung government is the high value of a three-stamp set issued by Japan in 1936. 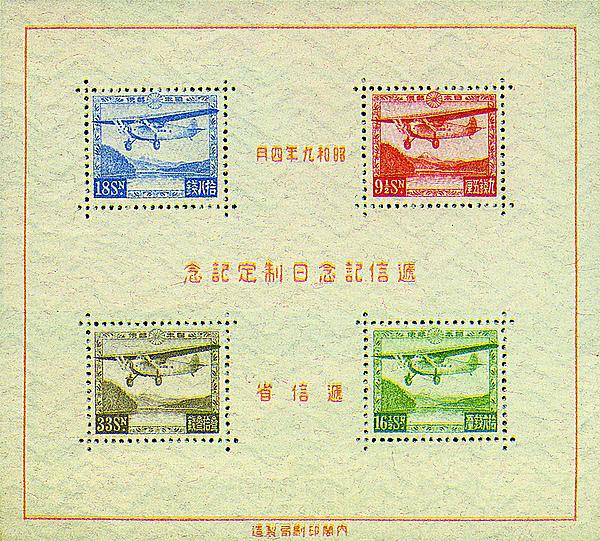 Japan’s 1934 Communications Commemoration Day airmail souvenir sheet. Though it is encountered regularly, its value is significant. 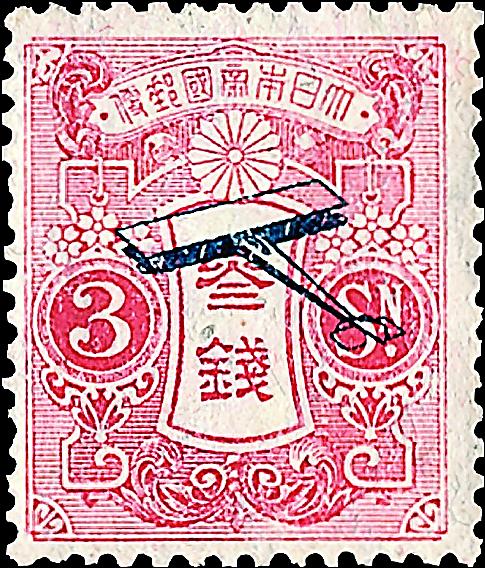 The high value of the two-stamp airmail set issued in 1919. Both stamps have high catalog values, and forgers have applied bogus overprints to the same inexpensive definitives that were used to create the genuine set. 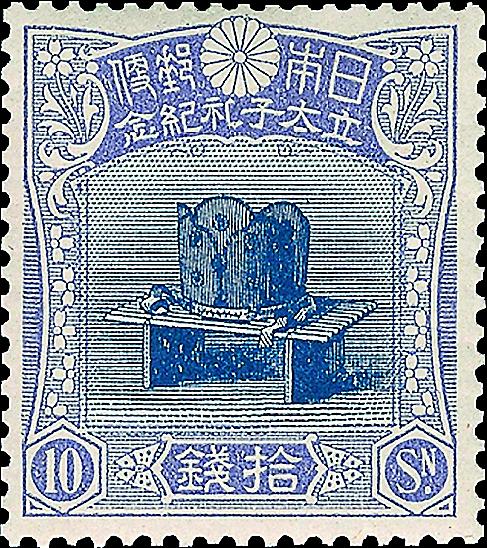 Japan’s 1916 10-sen blue Ceremonial Cap stamp commemorating the nomination of the prince heir apparent was issued in a small quantity, and many were struck with cancellations. The value of the unused stamp is bolstered by the limited number of examples now available.

Japanese philately is very popular both in Japan and overseas, and especially in the United States.

The pricing of Japan’s issues is determined by supply and demand.

For all of Japanese philately’s popularity, very accessible stamps and souvenir sheets have been issued during the 20th century in quantities under 100,000.

Japan’s then-heir apparent, Crown Prince Hirohito, was honored with a three-value set of stamps in 1916. The blue 10-sen stamp (Scott 154) was printed in a quantity of 86,000. Quite a few were struck with commemorative cancellations, both on and off cover.

Never-hinged examples can be found, though overwhelmingly it is the unused hinged stamps that are offered. The stamp is valued in the 2015 Scott Standard Postage Stamp Catalogue at $825 unused and $275 used.

In 1919, an airmail provisional set was issued to provide special airmail postage for the Tokyo-Osaka flight. Two definitives of the 1914 issue with the zigzag lines watermark were overprinted with the simple image of a biplane.

As a result of the crudeness of the overprint, forgeries abound.

Many of the examples that exist can be found on commemorative postcards.

The Scott catalog values for these stamps, unused, are $260 for the 1½s and $450 for the 3s. Never-hinged stamps of this issue are particularly elusive. Well-centered examples (by modern standards) are few and far between.

Another variety of the 3s rose stamp is a coil issued in 1933, of which only 50,000 were created. The coil is perforated gauge 13 horizontally, and care must be taken to obtain examples with straight and ample margins, to preclude the possibility of a trimmed example of the less expensive 1914 definitive.

The higher value for the used stamps (with a genuine contemporaneous cancel) illustrates the difficulty of introducing coils to the Japanese public.

The 1934 Communications Commemoration Day souvenir sheet of four (Scott C8) was issued in a quantity of 20,000.

Even though it is expensive, with a Scott catalog value of $2,000 never hinged and $1,250 unused, it is frequently encountered.

Japanese homeland collectors treat any of these souvenir sheets with gum or paper wrinkles as second class. Collectors in the U.S. marketplace watch out for tone spotting or perforation separations.

A 10s dull green stamp was issued in 1936 showing the headquarters of the Kwantung government in Port Arthur (Scott 229). Only 50,000 were issued.

Used examples of this stamp are difficult to locate and are valued at $135. The unused stamps carry an even higher value, at $210.

From 1939 to 1941, sets of four stamps commemorating national parks were issued, and each set was also offered in the form of a souvenir sheet. The releases of these were quite limited.

With the economy revving up for the Asian war, stamp collecting was on the back burner. How many very fine souvenir sheets could have survived the war for future generations?

The first two souvenir sheets commemorate Nikko National Park (Scott 283a) and Daisen and Inland Sea National Parks (288a) and are less costly than the others that follow.

The souvenir sheet for Daiton and Niitaka-Arisan National Parks (Scott 318a) was issued in a quantity of 76,000, and the value is somewhat less, at $80 hinged and $175 mint.

The same quantity was printed for the Tsugitaka-Taroko National Park souvenir sheet (Scott 323a), the final issue in the series, and the values are the same as well: $80 hinged and $175 mint.

Each sheet was issued with a descriptive folder and thin interleaving. In spite of this protection, some souvenir sheets have picked up tone spots or dryish gum. It is beneficial to collect a National Park sheet with the folder.

To mark the 75th anniversary of government postal service, a souvenir sheet of four stamps was issued in 1946, with two distinct printings (Scott 378a). On the more common variety, the ink lies flatter, as the Scott standard catalog explains in a note following the catalog listing.

Though 51,000 souvenir sheets were printed, no more than 2,000 with the high relief inscriptions (raised printing) were created, and those issues, therefore, are valued much higher, at $800, as opposed to $160 for the more common low-relief variety.

Never purchase a 1946 Government Postal Service souvenir sheet represented as the elusive variety unless it is expertized.

During the late 1940s, quite a few souvenir sheets were issued. Traveling stamp exhibitions were commemorated with souvenir sheets, or overprinting applied to previously issued sheets.

The Carp design for the 1948 Nagoya philatelic exhibition was overprinted that same year for the show in Mishima, in a relatively short run of 80,000 sheets (Scott 407). Perhaps this was all the souvenir sheets that were on hand. Nonetheless, inverted and diagonal overprint errors are known.

In the printer’s rush for fulfillment, even overprints on the wrong souvenir sheet — the similar sheet originally created for the Osaka exhibition — can be located.

In 1951, Japan issued a 10-yen definitive depicting Kannon, the Buddhist goddess of mercy.

The flat 10y Kannon pane was issued in 1954 to honor Philatelic Week, with one pane per booklet. Being a commemorative booklet, a short press run of 60,000 was done.

I imagine the number of intact panes or booklets is now far less given the large size of each pane. I have seen a “Mihon” (specimen) overprint, further reducing the number of mint examples available.

I am indebted to George Fisher’s article in the Vol. 19, No. 9 issue of Japanese Philately for research.

The journal is published by the International Society for Japanese Philately. For additional information about the group, visit the website at www.isjp.org, or write to ISJP secretary William Eisenhauer, Box 230462, Tigard, OR 97281.