The 100th anniversary of Britain’s postage due labels 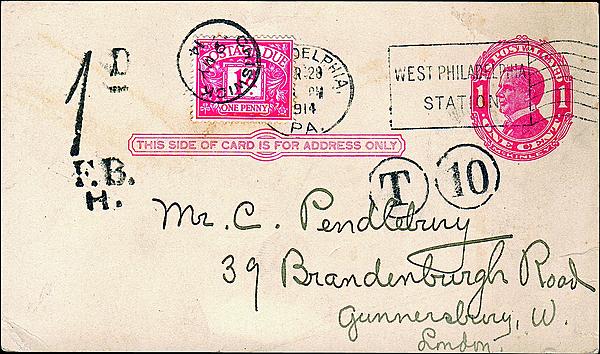 A postcard from the United States to Great Britain in 1914 was shortpaid 1¢ in postage. Double the deficiency, 10 centimes in French currency or 1 penny, was collected in England as postage due. 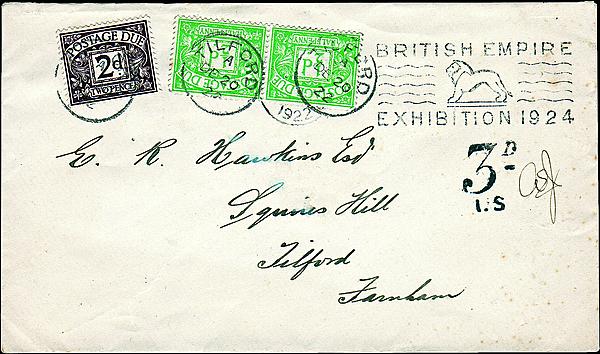 Postage due was computed at twice the deficiency. This envelope from 1922 was mailed without the then-domestic rate of 1½ pence and, as a result, was charged 3d postage due.

Great Britain issued its first postage due labels 100 years ago in April 1914. The same basic design remained in use for 50 years.

This year is the centenary of postage dues in Great Britain.

Prior to the availability of postage due labels, insufficiently paid postage was noted with special handstruck markings applied to letters and envelopes often indicating “more to pay.”

France led the way with postage due labels, issuing the first ones in 1859. It wasn’t until 55 years later that Great Britain followed suit.

The post office always preferred to call these perforated items “labels” to distinguish them from postage stamps, because they had no value in and of themselves like regular postage stamps.

Collectors vary. Sometimes we call them labels and sometimes stamps.

For the next 50 years, these labels basically kept the same design of a value displayed in the center of an art nouveau border.

As with postage stamps printed by Great Britain, there is no country name on the postage due labels. Shown in each corner is a flower identifiable with the four countries that make up the United Kingdom: the Tudor rose for England (upper left), the thistle for Scotland (upper right), the daffodil for Wales (lower right), and the shamrock for Northern Ireland (lower left).

A ½d value was needed, not because there could ever be a postage charge deficient by ¼d requiring the collection of double that deficiency, but because the return-to-sender fee of undeliverable items mailed at the printed paper rate was ½d.

As the postage due designs remained the same for half a century, the only distinctive characteristic of these labels is the watermark.

Six different watermarks exist. Collectors can often only determine these watermarks by dipping the postage due labels in watermark fluid.

The printed image was oriented so that the watermark appeared sideways with the top of the crown pointing toward the right when the label is viewed in an upright position from the back.

Specialized catalogs often show illustrations of these watermark varieties to make it easy for collectors to identify them.

At first, mint postage dues were not to be made available to the public.

The original 1914 post office instructions on how to use the new postage due labels specifically stated, “Postage Due Labels … must not be sold to the public.”

This did not last long. Requests from philatelists for mint examples caused post office officials to change their initial position, and mint labels were made available by mail order from the controllers of the London, Edinburgh, and Dublin postal districts within a week of their introduction.

So, postage due labels can be collected in both mint and used condition.

Postal history adds another dimension to a collection of postage dues. Covers often have adhesives of two different countries on them, plus a number of interesting markings.

The U.S. 1¢ deficiency translates to 5 centimes, the currency that all member countries of the Universal Postal Union used to indicate postage due on international mail. Double the deficiency was 10c, which is what is stamped on the card, and that equals 1d British currency.

The insufficiency was noted when the postcard was processed in New York for transport across the Atlantic, and it was handstamped with the opera glass marking “T” and “10,” the latter representing the 10c postage due.

The “T” stands for “taxe,” the French word for surcharge used by members of the UPU to indicate postage due.

When the insufficiently paid card arrived in the United Kingdom, it was processed at the Foreign Branch Office in London and stamped in black “1d” due.

Additional postage of 1d was collected from the addressee in Chiswick, a section of London, upon delivery. A 1d scarlet postage due label was applied indicating receipt of the postage due fee.

Great Britain stopped using postage due labels in the year 2000, bringing an aspect of British philately to a close for collectors.