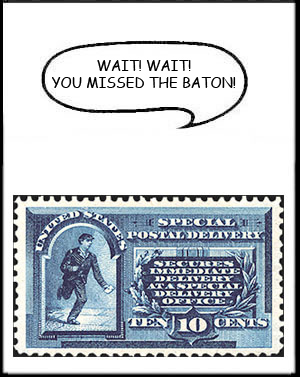 Don Adubato of Virginia wins one of two prizes in the August cartoon caption contest, with this line that puts the Special Delivery messenger on the 1885 Special Delivery stamp on a relay team. The next contest will be announced in Linn's Oct. 13 issue.

Yet the most popular theme for the contest was the messenger's wish for more comfortable shoes than the severe-looking pair evident on the stamp. An example is this entry from Terry Jordan of Potomac Falls, Va., "The least they should do is furnish me a better pair of running shoes."

Exercise in many forms was the second most used theme. Mentioned were marathons, track and field competition, health benefits of running, and several referrals to hopscotch. One of these, by Tom Shreve of Modesto, Calif., is, "A pre-work game of hopscotch always get me warmed up for my postal duties!"

Several entries posed the possibility that more than good service was motivating the messenger, an example being, "I can put up with snow, gloom, rain and heat — but those dogs will make me speed up my deliveries!" by Robert Shutterly of Cutler Bay, Fla.

On the philatelic side, Levin Messick of Yorba Linda, Calif., proposed: "Airmail? Never! Pigeons may be faster, but they aren't as reliable!" I guess the messenger on the stamp did not have the gift of prophecy. It would be a few decades before powered flight was invented.

"No wonder I'm blue! I've been trying to deliver this since 1885!" from Bennett Bardfeld.

"For only a dime, I can really make time!" by Edgar Dunlap of Gainesville, Ga.

"Whoa, what do you mean he lives on the 25th floor?" sent by Bert McGann of Berwyn, Pa.

"This is a heck of a job for a former Heisman trophy winner," from Thomas and Laura Tomaszek of Cedar Rapids, Iowa.

"First, they take my horse. Then they make me wear a uniform. What's next — bicycles?" by Arthur Richardson of Swampscott, Mass.

"Will anyone believe the raindrops on this letter are merely postage dew?" sent by Steve Kotler of San Francisco, Calif.

"This isn't what I thought they meant by 'rate hike'!" by Gary Kufchak of Wadsworth, Ohio.

The next cartoon caption contest will be announced in the Oct. 13 Linn's.