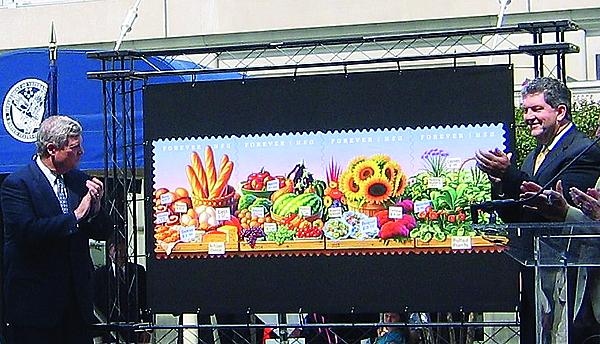 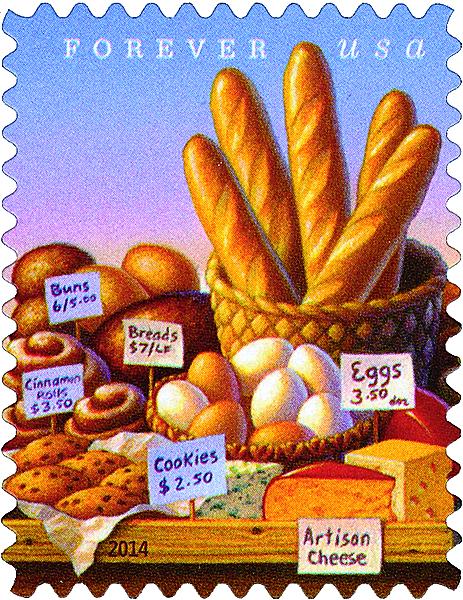 One of four Farmers Markets stamps issued Aug. 7 in Washington, D.C. The price tag on the loaves of bread is $7.

Eating farm-fresh foods has won a four-stamp endorsement from the United States Postal Service — regardless of the cost. That, in effect, is the message the new forever stamps send.

The stamps were dedicated Aug. 7 at the Freshfarm Market by the White House in Washington, D.C.

Even before the stamps were officially released by Postmaster General Patrick R. Donahoe, they had come under attack by a National Geographic blogger who was upset that a loaf of bread is shown on the stamp as selling for $7.

Too much says Mary Beth Albright, a self-proclaimed food evangelist, in an article titled “New Farmers Market Stamp A USPS Blunder,” at the blog site, http://theplate.nationalgeographic.com.

“The greatest argument against farmers markets generally these days is that they are more expensive than supermarkets …,” Albright complained.

“If the government is trying to fight this notion,” she added, “this stamp isn’t the way to do it.”

“The stamp portrays food prices that would make even an evangelist like me think twice.”

The U.S. Postal Service released a statement before the ceremony to blunt the National Geographic blog’s criticism.

“The new stamps are one example of a typical American farmers market,” it said.

“However, as the article references, prices do vary geographically and by season.”

Artist Robin Moline of Lakeland, Minn., who was making her stamp debut with the four stamps, sought to deflect the blog’s objections.

This is a forever stamp issue, she said after the ceremony, and the stamps are for the “past, present and future.”

Some prices might seem “a little bit high … we had to guess,” she said.

The ceremony drew a crowd of about 1,000 to a weekly farmer’s market near the White House that had been inaugurated by first lady Michelle Obama in 2009 as part of her campaign for Americans to eat better.

“This postage stamp will give us a chance to concentrate on the benefits” of farmers markets, he said.

For his part, Vilsack publicly placed one of the stamps on a letter to a North Carolina youngster who had written to him about his department and promised to give the rest of the stamps on his sheet to his grandchildren.

“It’s a great opportunity for them to start collecting,” the secretary said to the delight of collectors in the audience.

None of the speakers mentioned the flap over the prices shown on the stamps.

He also noted that a postal mural in the nearby Bethesda, Md., post office celebrated a farmers market. The mural was painted in 1939.

“Shopping at farmers markets is an age-old practice that’s back in style today,” he said.

The first-day programs did contain a mistake. Donahoe was listed as “Patrick J. Donahoe.” His middle initial is “R” not “J.”