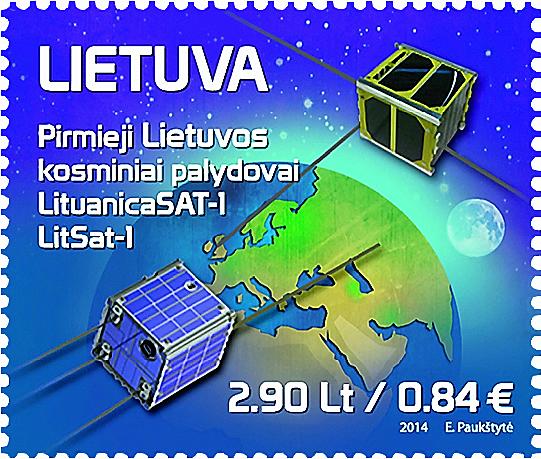 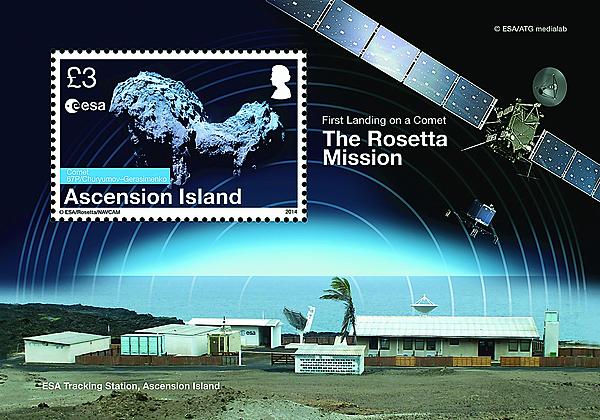 The European Space Agency tracking station on Ascenion Island is shown in the selvage of the souvenir sheet. 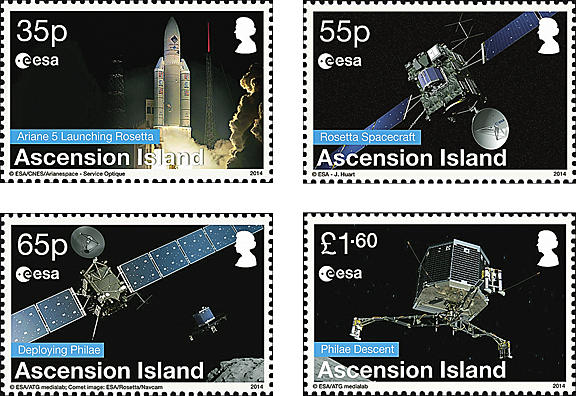 Four stamps from Ascension Island feature European Space Agency photographs of the Rosetta mission to land on a comet. The Ariane 5 rocket, the Rosetta spacecraft and the Philae lander are pictured in the designs.

A souvenir sheet from Ascension Island highlights its role in the recent European Space Agency’s Rosetta mission to land a spacecraft on a comet.

A set of four stamps and the souvenir sheet were issued Dec. 30 about six weeks after the Nov. 12 touchdown of Philae on comet 67P/Chuyumov-Gerasimenko.

Each design includes a silhouette of Queen Elizabeth II in the upper right and the emblem of the European Space Agency, or ESA, in the upper left.

The souvenir sheet contains a £3 stamp showing the comet. Discovered in 1969 by astronomers Klim Churyumov and Svetlana Gerasimenko from Kiev, Ukraine, the 2.5-mile wide comet is located more than 300 million miles from Earth.

Pictured in the selvage of the sheet is the ESA tracking station on Ascension Island.

The station on this remote South Atlantic island is used for tracking Ariane 5 rockets that take off from the Guiana Space Centre in French Guinea.

The 35-penny stamp in the set pictures the launch of the Rosetta spacecraft on an Ariane 5 rocket March 2, 2004, from the Guiana Space Center. Stations in Brazil, Kenya, Australia and Hawaii also tracked the spacecraft.

The Rosetta spacecraft is shown in space on the 55p denomination.

The 65p denomination shows the deploying of the Philae lander, which has been compared in size to a washing machine.

The spacecraft is named after the Rosetta stone, and the lander after the Philae Obelisk. Both the stone and obelisk were key in the deciphering of Egyptian hieroglyphs.

On the £1.60 stamp, Philae is shown making its descent to the comet. The lander sent data back to Earth before falling silent on Nov. 14.

In a Nov. 19 press release, the ESA said: “The lander’s planned mission ended after about 64 hours when its batteries ran out, but not before it delivered a full set of results that are now being analyzed by scientists across Europe.

“Rosetta’s own mission is far from over and the spacecraft remains in excellent condition, with all of its systems and instruments performing as expected.”

“This science-gathering phase will take us into next year as we go with the comet towards the Sun, passing perihelion, or closest approach, on 13 August, at 186 million kilometers from our star.’”

BDT International printed the stamps by offset in sheets of 10.

Lithuania issued a 2.90-litas/£0.84 stamp commemorating its first venture into space: the launch of two satellites, LituanicaSAT-1 and LitSat-1, on Jan. 9.

While orbiting the Earth for six months, they collected information about communications systems; took photographs of the Earth, sun and moon; and tested FM transmitters, according to Lietuvos Pastas (Lithuania’s postal administration).

Eveline Paukstyte designed the stamp. Garsu Pasaulis of Vilnius printed it by offset in sheets of 16 with four labels and in booklets of six with two labels.