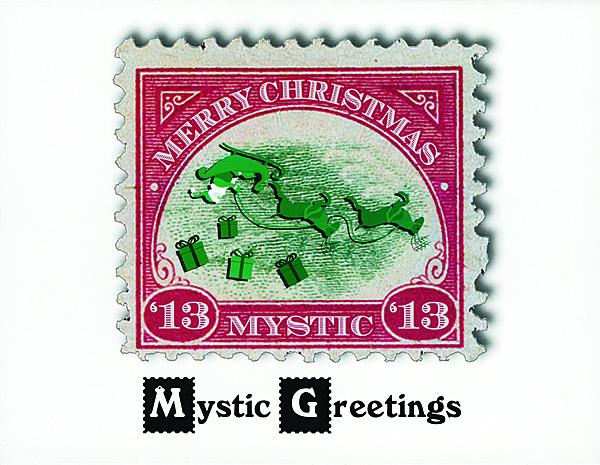 Mystic Stamp Co.’s 2013 Christmas greeting card adapted the 1918 24¢ Jenny airmail stamp to the holiday season. Shown here is the back of the card, which mimics the Inverted Jenny.

Shown are the 7¢ Stanton issue that was no longer needed, the 2¢ brown Jackson issued in 1870 that was replaced by the 2¢ vermilion, the 10¢ brown Jefferson that paid twice the basic international rate, and the new 5¢ blue Tayl 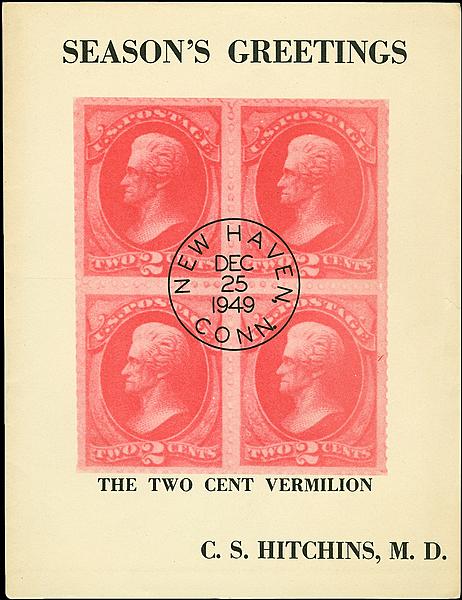 Considering the large numbers of stamp collectors in the mid-1900s, it is surprising to me that there are not more philatelic Christmas cards from that era. I am always delighted when another one surfaces.

See the example here from C.S. Hitchins, a New Haven, Conn., doctor. I have not been able to learn anything about Hitchins, but it is clear that he collected the United States 2¢ vermilion Andrew Jackson stamp issued in 1875.

The block of four on the card has a faux cancel dated Dec. 25, 1949. In place of a printed Christmas message, the inside says:

“The Rise of the Two Cent Vermilion; In 1875, the International Postal Union was founded by the Treaty of Berne [Switzerland] establishing the international rate at five cents. This resulted in the elimination of the seven cent stamp used for unit postage to Denmark since January 1, 1872. To prevent mistakes that might be caused by the similar colors of the two and ten cent stamps, the former was changed to vermilion, the color of the discontinued seven cent stamp.”

The 7¢ Edward Stanton stamp that was discontinued was, to me, one of the most attractive designs of the Banknote era. It was last issued as part of the Continental Bank Note issue of 1873, with secret mark and on white wove paper without grill.

The 2¢ and 10¢ stamps in brown were also first issued in 1870. The color change of the 2¢ from brown to vermilion was so that it would not be mistaken for paying the 10¢ (two times 5¢) international surface rate.

No other color changes were made at the same time, but 1875 did see a new 5¢ stamp. There had been no prior 5¢ Banknote issue. It is the Zachary Taylor stamp in blue.

Perhaps Hitchins added Christmas notes in his cards, but there was none in this one.

A more modern Christmas greeting with stamp content is the Mystic Stamp Co. card. The firm’s 2013 card is a takeoff on the U.S. 1918 24¢ Inverted Jenny airmail stamp (Scott C3a) — only this is an inverted Santa Claus and sleigh.

This is a particularly appropriate theme for Don Sundman and his staff at Mystic, because the U.S. Postal Service had released its $2 version of the 1918 error in September.

But Sundman at that time had another major connection to the Inverted Jenny. In 2005, he had traded the 1868 1¢ Franklin Z grill (Scott 85A) to Bill Gross for the unique Inverted Jenny plate block, and owned it until it recently sold for a purchase price of more than $4.8 million.