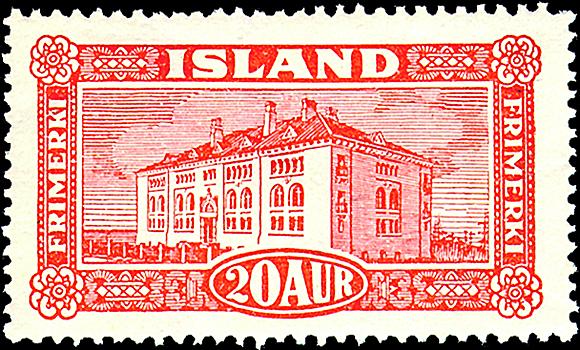 One stamp, 20 aurar, in the first pictorial set from Iceland depicts the building in Reykjavik that houses the national library, archives and museum. 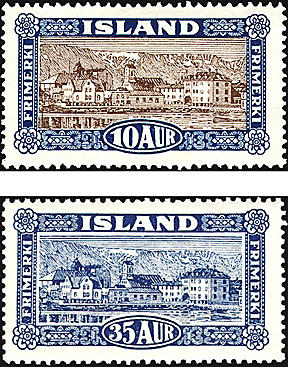 The same view of Iceland’s capital city, Reykjavik, appeared on the 10-eyrir and 35e stamps of the 1925 set. 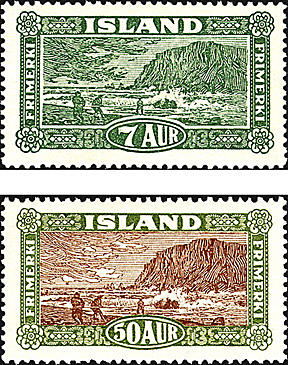 This design, based on a photograph of Vik’s black sand beach, was used for the low and high denominations of Iceland’s first pictorials in 1925.

In 1924 the congress of the Universal Postal Union (the international body of postal administrations) decreed that postal rates between its member nations should be reduced.

New stamps would be necessary in many countries, including Iceland, where the printed matter rate dropped from 10 aurar to 7a; the postcard rate became 20a rather than 25a; and the ordinary letter rate became 35a instead of 40a.

The monetary unit “aurar” is plural for the eyrir. One Icelandic krona is equal to 100 aurar.

For several years after the rate change, existing stamps that depicted King Frederik VIII or King Christian X were surcharged to meet the new rates, but in 1925 the Icelandic Postal Administration decided to act on an idea that had been discussed since 1895.

A new series of stamps would be issued that would feature images of Iceland, rather than monarchs or statesmen.

Three designs were selected for a set of five stamps (Scott 144-148): the 7e and 50e issues show the beach at Vik i Myrdal, on the remote southern coast; the 10e and 50e stamps feature a view of Reykjavik, the capital city; and the 20e stamp shows the building in Reykjavik that houses the national library, archives and museum.

Photographs were used as the basis of all three of the designs of these pictorial stamps.

Olafur Jonsson was a photographer working near the village of Vik in 1910 when he captured the scene of men landing a small boat, used on the 7e and 50e stamps.

In a 1977 book, One Hundred Years of Icelandic Stamps, 1873-1973, by the Post and Telecommunications Administration in Reykjavik, Jon Adalsteinn Jonsson wrote: “This is quite an interesting picture from the point of view of Icelandic postal history, as the second man from the left, holding the rope during the boat’s landing, is Halldor Jonsson, who for long was a postmaster in Vik. The picture draws attention to the hard struggle Icelanders have always had to wage when seeking a livelihood from the cruel sea.”

The beach of volcanic, black basalt sand at harborless Vik, the southernmost village in Iceland, marks the edge of the last landmass before Antarctica, and the fierce and relentless waves there have claimed many fishermen’s lives over the centuries.

Olafur Magnusson’s photographs of a view of Reykjavik with Mount Esja in the background and of the national museum were the basis of the other two designs of the set.

H.H. Thiele & Co. of Copenhagen printed the stamps by letterpress typography in sheets of 50 on watermarked paper (watermark 114 of crosses), perforated 14 by 15.

The denominations were reprinted at various times through the 1920s and into the 1930s, remaining valid until Dec. 1946.

Curiously, when Scott’s Monthly Journal of December 1925 noted that pictorial stamps had been issued for the first time in Iceland, it was stated that “on the 7a green and 50a brown is a design showing fishermen landing on the harborless coast of southern Iceland.”

However, by the 1936 Scott Standard Postage Stamp Catalogue, the subject description for Scott 144 and 148 became “landing the mail,” and so it has subsequently remained.

Used examples are more modestly valued: a full set at $26.25.

The stamps pictured with this article courtesy of Jay Smith & Associates of Snow Camp, N.C.; www.JaySmith.com.