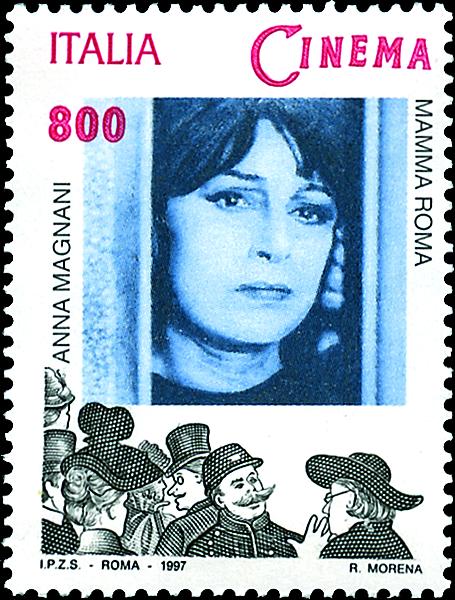 Pier Paolo Pasolini directed and wrote the screenplay for the 1962 film Mama Roma, featured on a 1997 stamp from Italy. An Italian stamp honoring Pasolini will be issued later this year.

It seems hard to believe, but despite the recession plaguing southern Europe, Poste Italiane (Italy’s postal administration) recently reported increased philatelic sales and an unexpected surge in the number of new-issue subscribers.

Such encouraging figures have produced optimism in the philatelic world, and some of it is reflected in the 75 stamps in 38 issues Italy has planned for 2015.

The new year starts with a stamp in the Civic Sense series focusing on natural disasters, such as the Marsica earthquake that devastated central Italy in 1915, killing more than 24,000 people.

In March 1865, Florence replaced Turin as capital of Italy for six years. The 150th anniversary of this phase of the unification of Italy will receive a philatelic tribute in 2015.

The 500th death anniversary of humanist, printer and publisher of the Renaissance Aldo Manuzio the Elder will be remembered in February. Manuzio (also called Manutius) invented the small format inexpensive book, a forerunner of the paperback.

In April, three stamps of the Outstanding Features of the Production and Economic System series will celebrate anniversaries of hazelnut chocolatier Caffarel, Fernet Branca distilleries, and coffee products manufacturer Lavazza.

A fourth stamp in the series will follow in May to highlight Vignola cherries, and finally, in September, a stamp for the truffle industry will complete the series’ cycle for 2015.

A “give the gift of life” stamp to increase the number of blood donors will be issued in June.

The Dolomites, the Venetian island of Burano and other tourist attractions will be featured on stamps to be issued in May and July. In September, four stamps will feature botanic gardens and national parks.

Sports stamps will include a commemorative to greet Turin as the 2015 European Capital of Sport, scheduled for release in January; and in June, a stamp will honor the champion team of the Serie A soccer league.

In addition, in August, the Canoeing World Championship will be held in Milan, but this will not be the only philatelic link to the financial and industrial metropolis of Italy. Two stamps will be issued in April to salute the opening of the six-month long Expo 2015 in Milan. This will be the second time Milan hosts a world’s fair; the first time was in 1906.

For well more than 95 years, religious subjects have been a major component of Italian stamp issues. In July, a stamp will commemorate the 500th birthday of St. Philip Neri, known as the “apostle of Rome.” In August, a joint issue with the Vatican City will mark the 200th birth anniversary of St. John Bosco, a popular saint, educator and writer of the 19th century.

Just in time for the new vintage, in October, a souvenir sheet of 15 stamps will, for the fourth year in a row, feature famous Italian wines, including Chianti, Prosecco, Dolcetto and Verdicchio, to name a few.

The year will come to an end with the traditional Christmas issues, and a stamp for the 40th anniversary of the death of poet, writer, political figure and film director Pier Paolo Pasolini. This will be the first time Pasolini will appear on a stamp, although a couple connections to earlier stamps can be cited.

For example, a 1995 stamp (Scott 2051) honors Federico Fellini’s 1957 film The Nights of Cabiria for which Pasolini contributed to the screenplay; and a 1997 stamp (2171) features the 1962 film Mamma Roma, directed and written by Pasolini.

A philatelic commemoration of Italy’s entrance in World War I also is expected to be issued in 2015.