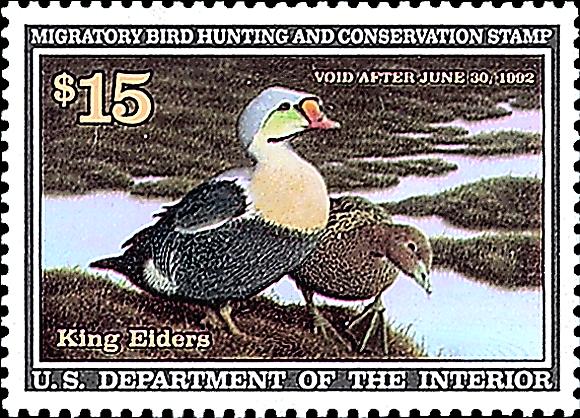 "It's sometimes easy to lose hope these days, given the challenges our nation faces and the seemingly intractable political polarization of our society," Ashe said in a news release. "But President Obama's approval today of bipartisan legislation raising the price of the Federal Duck Stamp is a reminder that we're still capable of great things as a nation."

That’s because Congress has finally agreed to a big price increase for the federal government’s migratory bird hunting and conservation stamps.

The stamps, required by duck hunters and popular with stamp collectors, will increase by a whopping $10 next year — to $25.

The legislation, expected to be signed by President Barack Obama before Christmas, ended eight years of efforts by conservationists to convince lawmakers that the increases were not actually taxes, but user fees, one key proponent of the change told Linn’s.

But even Paul Schmidt, chief conservation officer for Ducks Unlimited in Memphis, Tenn., one of the big supporters of the increase, conceded that purchases of the stamp are likely to fall next year because of “a little bit of sticker shock” over the increase.

Rita Dumaine of Sam Houston Duck Co., a major duck stamp dealer, says she wishes the price “had been stepped up over the years” perhaps to $17.50, then to $20.

Getting the increase approved by a Congress that has been wary of anything that suggests an increased burden on the public was a major victory for conservation groups and the Obama administration.

The Obama administration had been urging an increase in the stamp’s price since taking office in 2008, Schmidt said.

“This is huge news for conservation and duck hunters,” said Sen. David Vitter, R-La., who backed the legislation, in a Dec. 2 news release hailing Senate approval of the increase.

“At a time when millions of acres of wildlife habitat are at risk of being lost forever, congressional approval of this bipartisan legislation is a critical boost for wetlands conservation,” said Dan Ashe, director of the Fish & Wildlife Service, which administers the program.

“By restoring the lost purchasing power of the federal duck stamp program, this legislation will give us the opportunity to work with thousands of additional lawmakers across the nation to maintain vital habitat for waterfowl, grassland birds and hundreds of other native species,” he said after the Senate approved the measure.

Both the George W. Bush and Obama administrations had warned Congress that higher land costs were crippling the U.S. Fish and Wildlife Service’s efforts to purchase more wetlands for waterfowl.

Since the first duck stamp was sold in 1934 for $1, the program has raised more than $800 million, funding the purchase of about six million acres of waterfowl habitat.

What Schmidt describes as a “misunderstanding” about the stamps by lawmakers made winning any price increase difficult.

To some, the legislation sounded like “a tax increase” and that idea “carried a lot of political baggage with it,” Schmidt told Linn’s.

While Schmidt expects the stamps’ sales may dip because of the increase, he says they should rebound in a couple of years, as they have after previous price increases.

Few of the lawmakers who approved the 1991 increase from $12.50 to $15 are still in Congress, and that meant supporters of the higher price had to do considerable work to get Congress comfortable with the idea of raising the price, according to Schmidt.

His argument: the stamp’s cost is a fee — not a tax — that produces a “user-paid public benefit.”

A study by the Congressional Budget Office projected in 2014 that the increase would total about $13 million in new revenues beginning in 2016.

Schmidt said a number of prices were considered before backers agreed on the $10 increase as one that would be the most acceptable to Congress.

Another provision that remained in the bill will allow the Secretary of the Interior to order a cut in the price of the stamps if it appears that total stamp revenues would fall under the higher $25 price.

Schmidt said the stamps’ supporters have no hard figures on what percentage of duck stamp sales go to collectors and how much goes to hunters.

They estimate that hunters account for 90 percent of the stamp sales and that collectors and conservationists split the remaining 10 percent.

At $15 each, there is no doubt that the stamps have had a major impact on waterfowl conservation efforts.

“Approximately 100,000 gummed stamps are sold per year at $15 each,” he wrote in a 2005 article titled “What Do Those Duck Stamp Dollars Really Mean?”

“That is $1.5 million going into the conservation fund that may be contributed by people who have never raised a shotgun to their shoulder.”

Duck stamp revenues “have always been problematical,” he noted.

His argument was that the revenues were always expressed in dollars unadjusted for inflation.

He warned that using inflation-adjusted dollars might be critical to “the continuation of the federal duck stamp program.”