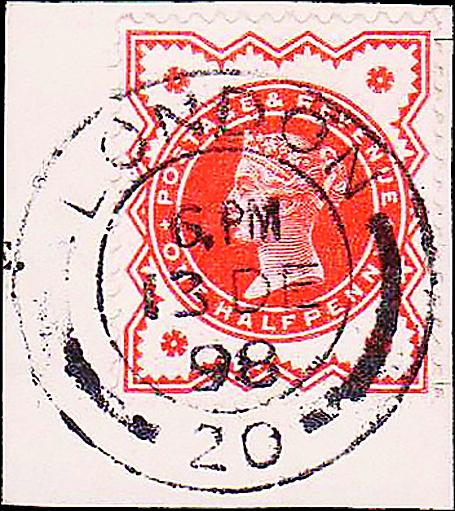 A ½d Queen Victoria stamp (Scott 111) on piece bearing an example of the standard two-ring circular postmark introduced throughout England in 1892. 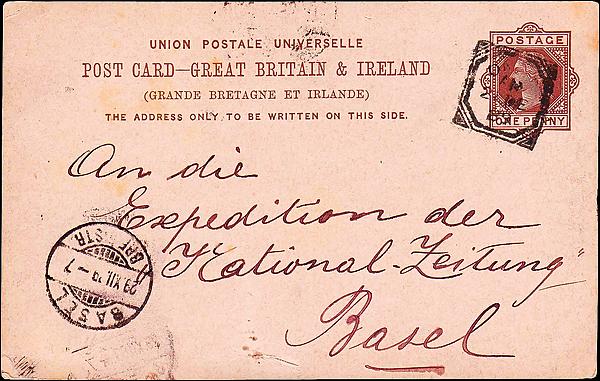 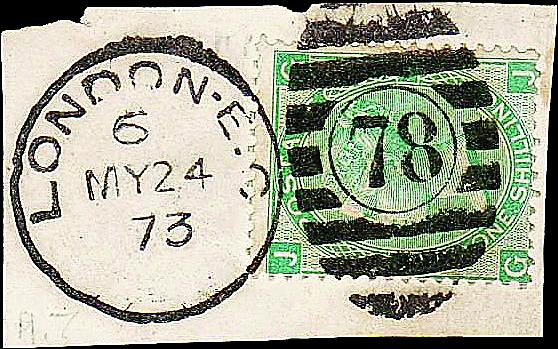 This 1-shilling Queen Victoria stamp (Scott 64) bears a standard cancellation from the duplex obliterator in use from 1860. 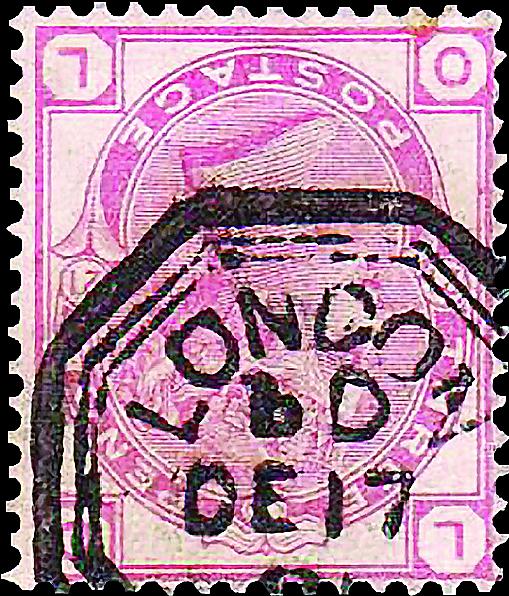 A 3-penny rose Queen Victoria stamp (Scott 61) bearing an example of the experimental London fancy geometric postmark used by the British Post Office between 1880 and 1883. The stamp is shown upside down, oriented to the postmark.

The stamp is shown upside down, oriented to the postmark. It is an example of the London fancy geometric postmark experiment conducted by the British Post Office between 1880 and 1883.

Starting in 1860, the common format of the cancellations applied to mail in Great Britain was a duplex obliterator. The 1-shilling pale green Queen Victoria stamp (Scott 64) shown on piece bears an example of the duplex obliterator.

It is called duplex because it consists of two elements on one device. On the right is the obliterator comprising heavy bars in the shape of an oval with a number in the center, which canceled the stamp. On the left is a circular postmark showing the location and date of mailing.

The devices used to apply the duplex cancellation were bulky, heavy and expensive to manufacture. They also tended to produce incomplete strikes.

After 20 years of use, postal authorities sought a new device that would combine the obliterator and postmark.

The first experimental design was introduced in the London Inland branch office in January 1880. It consisted of the three-frame octagon postmark borne by the stamp mentioned in the first paragraph.

A second design in the experiment retained the basic octagon shape but added triangles to the corners, which gave the original octagon a square look.

Sometimes the triangles look like dots, and sometimes dirt and debris clogged the larger triangles and gave them a filled-in look.

London fancy geometric postmarks are fairly easy to distinguish from other postmarks. The basic octagon shape is quickly recognizable. The place of mailing is always London: one of two London branch offices, either the Inland branch or the Lombard Street branch. A postmark from any office other than London or Lombard Street cannot be of the fancy geometric genre.

The date has to be after 1879. Examples of London geometric fancy postmarks have been found on stamps and covers dated as late as 1904.

The fancy geometrics are usually found on stamps that were concurrent with the 20 years of the experiment: Penny lilacs (Scott 88-89), Venetian reds (79), 2½d clarets (67), 2½d ultramarines (68), and contemporaneous higher denominations.

Used single stamps bearing enough of the postmark to be legible are very collectible.

Ironically, none of the experimental octagonal or fancy geometric postmark devices was chosen to replace the duplex obliterator as the standard postmarking and canceling device. The new standard device favored by postal authorities and introduced throughout England in 1892 was a two-ring circular postmark.

The ½d Queen Victoria stamp (Scott 111) on piece shown above bears an example. This postmarking device was developed in Edinburgh, Scotland.