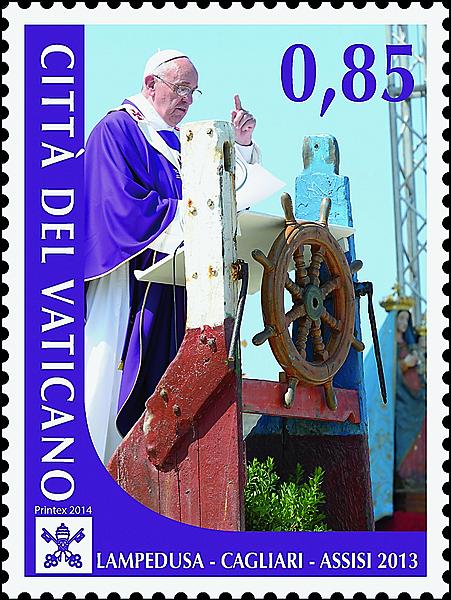 Proceeds from the sale of this new stamp from Vatican City will be donated to support immigrants from Africa who have landed on the island of Lampedusa. 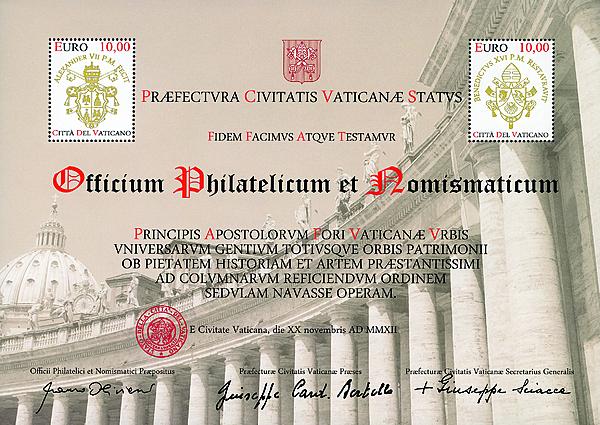 Vatican City issued a souvenir sheet in 2012 to raise funds for the restoration of the Bernini Colonnade. The sheet also is a certificate.

In 2012, the Vatican embarked on a fundraising initiative for the $20 million restoration of the Bernini Colonnade surrounding St. Peter’s Square.

The project involved stamp collectors and the general public who were encouraged to buy a souvenir sheet (Vatican City Scott 1515) that was devised as a certificate inscribed with the name of the benefactor.

Such a personalized philatelic item was unprecedented and resulted in sales totaling more than $1.5 million. The proceeds were added to the funds for the project.

Based on this success, the Vatican has confirmed that all proceeds from sales of the €0.85 stamp issued Nov. 21 to commemorate the visit of Pope Francis to the island of Lampedusa on July 8, 2013, will be used for charitable endeavors to assist scores of migrants from Africa who survived the crossing and landed on the island.

The Lampedusa visit was motivated by the drowning of hundreds of African refugees who attempted to make the 80-mile crossing but lost their lives.

The €0.85 stamp depicts the pope delivering his homily from an altar built by an islander using the helm and other remains from one of the many rickety vessels that reached Lampedusa.

The stamp is sold in panes of 10 and in a booklet of four. The booklet cover depicts a fishermen’s boat and Pope Francis during the mass that made headlines worldwide as the pontiff condemned the “global indifference” to the plight of the migrants.

The stamp is part of a set of two highlighting papal visits within Italy and to Brazil in 2013.

In addition to honoring the visit to Lampedusa, the €0.85 stamp also commemorates visits to Cagliari (Sardinia) and Assisi.

The €0.70 stamp shows the pope in the foreground and the Brazilian flag and Rio de Janeiro’s Christ the Redeemer statue in the background.

The Vatican has three main outlets for the sale of these stamps, or alternatively buyers may order by e-mail at order.ufn@scv.va, or by postal mail at Philatelic and Numismatic Office, Governatorato, 00120 Vatican City.

Meanwhile, Pope Francis’ popularity is witnessed by the 30 mailbags delivered every week to the Vatican, containing thousands of letters addressed to him.

A special office manned by a multilingual staff of three is headed by Monsignor Giuliano Gallorini, who has been nicknamed “the pope’s postman.”

All letters receive a response, and the more important and touching ones often reach the pope’s desk, who responds personally.