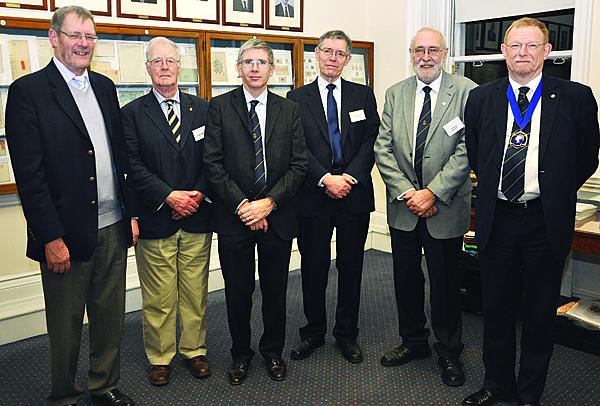 The six collectors whose material recorded the activities of stamp dealers in the 19th century was displayed at the Dec. 17 meeting of the Royal Philatelic Society London.

Displays related to stamp dealers of the 19th century were shown to the members of the Royal Philatelic Society London at its Dec. 17 meeting at 41 Devonshire Place, London.

Included were price lists, mail sent to and from stamp dealers around the world (many using the dealer’s own postal stationery), and ephemera such as poster stamps.

In addition to selling stamps, many of these 19th-century dealers were involved in the publishing of philatelic literature.

Jon Aitchison, a council member of the society, commented that the first record of dealing, as evidenced from the material on display, was in 1864, just 24 years after the introduction of the Penny Black, the world’s first postage stamp issued by Great Britain May 6, 1840 (Scott 1).

Today, the society has more than 1,150 overseas members and almost 900 members in the United Kingdom.

Those wishing to visit the Royal Philatelic Society London at 41 Devonshire Place, London W1G 6JY, or be a guest at one of its meetings, are asked to contact in advance the administrative office telephone 44-020-7486-1044.