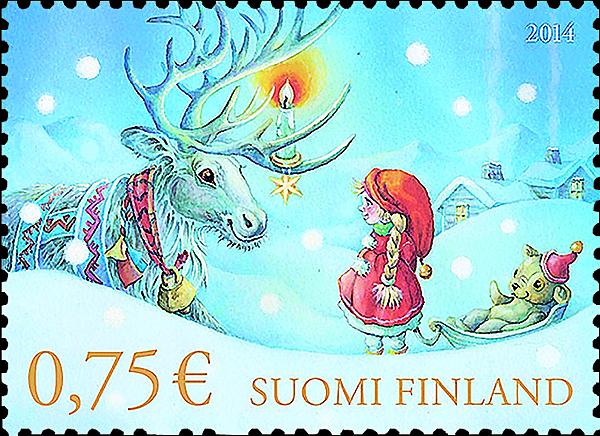 An illustration of an elf girl encountering a reindeer on Christmas Eve is featured on a stamp from Finland. 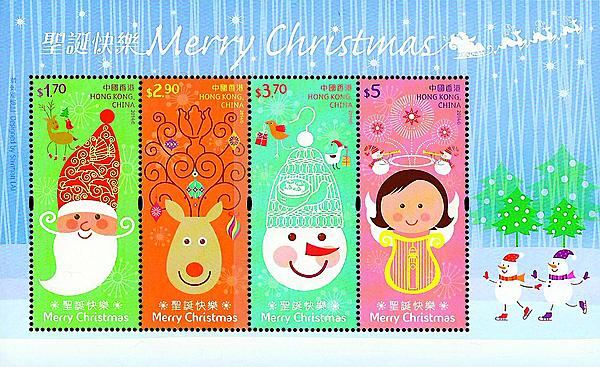 The $1.70 and $2.90 stamps in this Christmas souvenir sheet from Hong Kong include images of Rudolph. Reindeer pulling Santa’s sleigh can be seen in the selvage.

Two schoolchildren featured Rudolph in their illustrations reflecting the theme “What does Christmas mean to you?” Guernsey issued these self-adhesive ornament-shaped stamps Nov. 6. 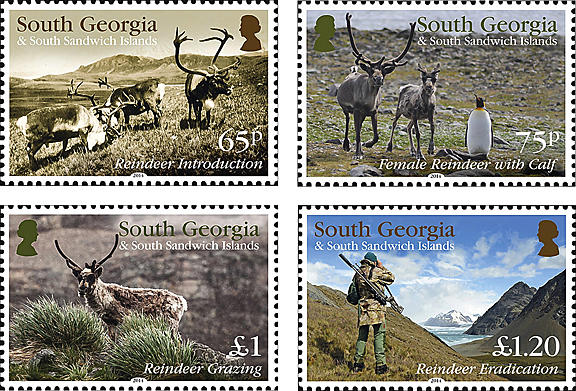 A set of four stamps from South Georgia is called History of Reindeer. Reindeer were introduced to the island in 1911.

The United States Postal Service pictured Rudolph the Red-nosed Reindeer and a few of his friends on stamps issued Nov. 6. Christmas stamps from other countries also show this famous reindeer.

Guernsey Post arranged a design contest for schoolchildren to create the designs for this year’s Christmas stamps. The theme was “What does Christmas mean to you?”

Nearly 300 entries were received in the competition, according to Guernsey Post.

Red-nosed reindeer can be seen on two of the stamps. The 36-penny denomination shows nine-year-old Katra Devon’s design called “Rudolph With Stars.” Georgia Winstanley, also nine, created the drawing of Rudolph with candy canes shown on the 54p stamp.

Cartor Security Printing of Meauce, France, printed the stamps by offset in sheets of nine.

Students at St. Anne’s School on Alderney, an island in the bailiwick of Guernsey, participated in a similar contest, except that the students worked together in teams.

The team of Alexandra Campbell, Joe Blackham and Ian Adamson designed the scene of the North Pole shown on the 36p stamp. Pictured on the ground is a large Rudolph, two elves and a North Pole sign. Seen in the night sky are a bright star and reindeer pulling Santa Claus in his sleigh.

Unlike the stamps from Guernsey, the Alderney stamps have a moisture-activated adhesive. Lowe-Martin of Canada printed them by offset in sheets of 50.

In the third set just released Nov. 4, Rudolph is featured by himself on the $2.90 value, and is shown with Santa Claus and a bird carrying a small tree on the $1.70 denomination. In the latter design, Rudolph is wearing four red stockings with white fur trim.

Hong Kong Post described the designs: “This set of stamps creatively blends scenes of local life into well-known Christmas settings to share festive sentiments. The four distinctive stamps, depicting Santa Claus, a reindeer, a snowman and an angel, blend in local elements like a junk, the golden bauhinia sculpture in Wan Chai, dim sum and the Clock Tower in Tsim Sha Tsui.”

Also, the $1.90 and $3.70 denominations were produced in separate panes of eight stamps with se-tenant labels that can be personalized. Hong Kong Post calls its personalized stamps “heartwarming stamps.”

Finland’s Itella Post describes the designs: “With these stamps executed with watercolor technique, Segercrantz wants to create a true Christmas fairy-tale atmosphere. In the blue-hued Christmas Eve Christmas-tariff stamp [€0.75], an elf girl enjoys the enchanting atmosphere with a Christmas reindeer in candlelight. In the other Christmas stamp, the orange-hued Christmas Morning 1st-class stamp, an elf rings a large Christmas bell, feet off the ground.”

The girl on the €0.75 stamp also is pulling a teddy bear in a small sled.

In contrast to the fairy tale atmosphere portrayed on the aforementioned stamps from Finland, a set of four stamps from South Georgia focus on a serious topic: the introduction of reindeer to that remote island in the South Atlantic Ocean and their later eradication. Called History of Reindeer, this set of four stamps was issued Oct. 14. It is not a Christmas set.

All of the stamps show photographs. The low value of the set, 65 pence, is inscribed “Reindeer Introduction.”

Capt. Carl Anton Larsen of Sandefjord, Norway, established the first whaling station on South Georgia in 1904, according to The Island of South Georgia by Robert Headland. Larsen’s older brother, Lauritz, soon came to the island as well, and starting in 1909 served as the first manager of another whaling station. Two years later, in 1911, the brothers introduced 10 reindeer to South Georgia’s Barff Peninsula to remind them of home and for recreational hunting purposes.

In 1911 and 1925, reindeer were introduced to the Busen region of the island.

Larsen wrote of the deer, “I feel sure they will thrive and become prolific in time, if they are left alone, which would most assuredly be an asset to South Georgia.”

And they did thrive. The 75p stamp shows a doe with a calf and a king penguin, and the £1 stamp pictures a reindeer grazing.

By the end of the 20th century, the sheer number of reindeer was threatening the survival of some of the island’s other wildlife, especially native birds. The government of South Georgia and South Sandwich Islands announced its intention to eradicate the reindeer in 2000 in a plan called the Environmental Management Plan for South Georgia. A few of the reindeer were relocated to Falkland Islands, but more than 6,000 were killed either by controlled hunting or were corralled and killed under veterinary supervision in 2013 and 2014.

Newspaper reports in 2013 quoted Arild Skedsmo of the World Wildlife Fund conservation group as saying the cull “is the kind of action that’s needed from time to time to correct previous mistakes.”

The £1.20 stamp shows a marksman searching for reindeer. The inscription reads, “Reindeer eradication.”

The government of South Georgia also has plans to eradicate rats, mice and nonativeplants.