Spotlight: The challenge of the fifth dimension 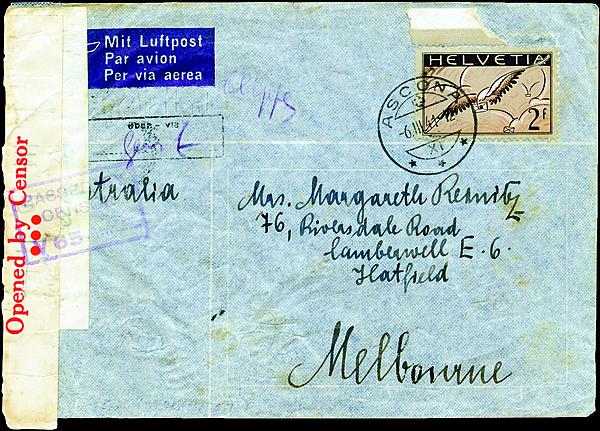 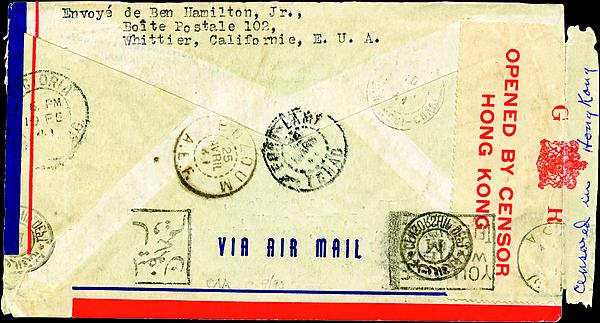 This cover was posted and canceled Feb. 5, 1941, at Whittier, Calif. The sequence of postmarks struck on the back as it transited four additional countries was as follows: Feb. 19 at Victoria, Hong Kong; an indistinct February or March date at Cairo, E 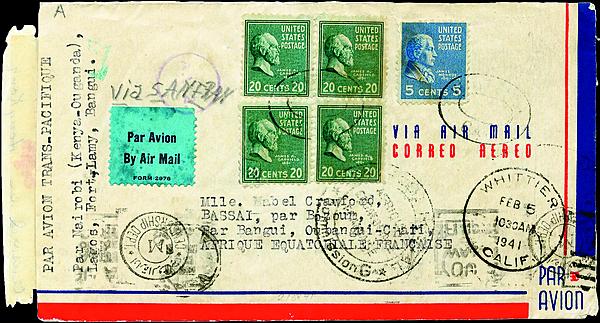 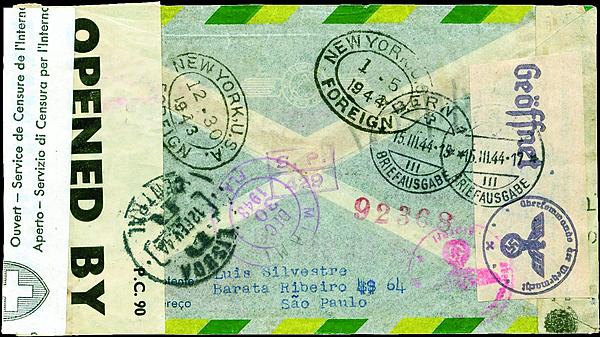 Censors of five different countries opened and examined the contents of this airmail cover that departed Sao Paolo, Brazil, in late December 1943 and was delivered to its addressee, an Italian military officer interned at a Murren, Switzerland, camp on 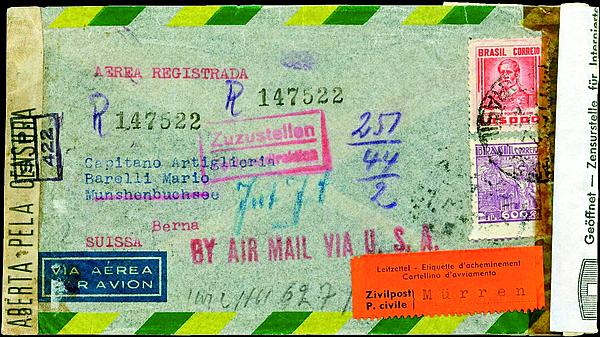 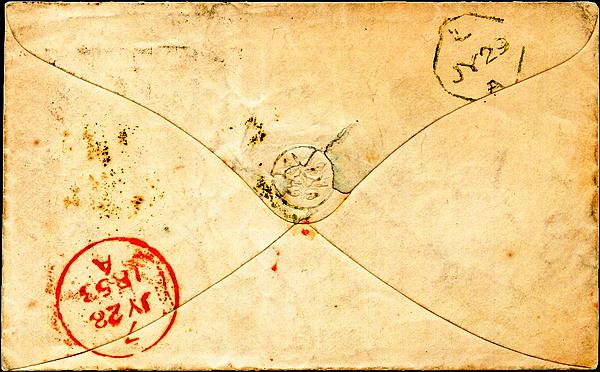 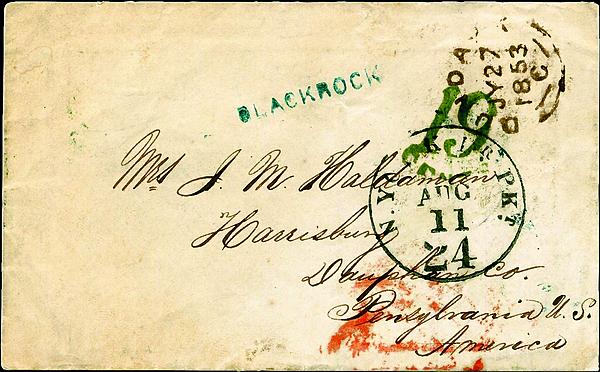 Nearly every experienced postal history collector develops a fondness for multicolor frankings, partly because a medley of colors has exceptional visual appeal, and partly because they are relatively uncommon. Three-color and four-color frankings are often described in those terms in auction catalog descriptions, and exhibitors prize them as showpieces.

Try carrying that one step further. Non-philatelic covers with five or more colors of single-color postage stamps, whose total amount of postage pays the correct rate, are uncommon.

A registered airmail cover from Alexandria, Egypt, to New York City bearing five colors of King Farouk stamps is one of my favorites.

It was mailed in February 1944 and shows characteristic traits of World War II international mail.

Even with a less lavish franking, the multicolor pictorial envelope, the handstamped endorsements, the red registry label and the wartime censorship markings would draw attention.

My quest for five-color frankings became the first step across the threshold into the fifth dimension of cover collecting.

Next, I tried to imagine how I could apply this principle to the era when most mail was stampless. When a cover from Blackrock, Ireland, to Harrisburg, Pa., appeared at auction, I had my answer. It has five postmark ink colors in this order of posting and transit:

The letter originated at the seaside village of Blackrock, County Louth, represented by the straightline blue townmark.

From there it went to the larger county town Dundalk where it acquired the July 27, 1853, brown rimless date-stamp.

The next stop was Dublin, represented by the July 28 red circular date­stamp on the back, before crossing the Irish Sea to England for trans-Atlantic dispatch.

There it was taken aboard the Cunard line steamship Africa for the trip to New York, and upon arrival it received the large “Aug 11 N. York Br. Pkt. 24” circular datestamp in black.

Can any reader show a classic stampless cover with more than five ink colors in the postal markings?

Collectors who specialize in postal censorship assign premium values to covers that were examined by censors of more than one country. Twice-censored covers are not difficult to find; thrice-censored are more difficult. Covers censored by more than three countries are seldom seen, which means that a cover censored at five locations is truly scarce.

The registered airmail cover, illustrated on page 28, addressed to an Italian artillery officer interned in Switzerland, was mailed at Sao Paulo, Brazil, in late December 1943. After being examined and passed by the Brazilian censor, it flew north aboard a Pan American Airways flight from Natal that transited Miami on Dec. 30 and arrived at New York City the same day.

There it was examined by the U.S. Office of Censorship and released back to the mails on Jan. 5, 1944. The next stop was Bermuda, where British Imperial Censorship had its look and held it more than a week before sending it onward to Lisbon where it arrived Feb. 12.

From Lisbon it went to Paris for examination by a German censor and another delay; next it was on to Bern on March 15 for the final censorship inspection. By this time, the internee had been relocated from a camp at Munshenbuchsee to one at Murren (not reachable by road) where the envelope was delivered.

Another airmail cover acquired postmarks of five different countries on a long journey that began February 5, 1941, at Whittier, Calif., although it traveled over and through more countries than that.

Airmail service from the United States to French colonies in Africa south of the Sahara had been suspended after Germany subjugated France in June 1940, but the sender had requested an improbable route that he hoped would transport his letter to the remote village of Bassai in Ubangi-Shari, French Equatorial Africa, by the fastest means.

In the illustration, I folded back the censorship tape to reveal the sender’s complete routing endorsement. Translated from French it read, “By trans-Pacific air, by Nairobi (Kenya-Uganda), Lagos [Nigeria], Fort Lamy [Chad], Bangui [Ubangi-Shari].” The address panel directed it within French Equatorial Africa to “Bassai, by Bozoum, by Bangui, Ubangi-Shari.” Postage was the correct but seldom-encountered 85¢ single airmail letter rate to Kenya, which was in effect for less than a year, from Aug. 6, 1940, through July 17, 1941.

For its trans-Pacific journey over U.S. Foreign Air Mail Route No. 14, the luxurious China Clipper flying boat departed San Francisco Feb. 6, was delayed at Los Angeles by foul weather until Feb. 12, and arrived at Hong Kong Feb. 18. There the letter was opened, examined, sealed with a censorship tape, postmarked Feb. 19 at Victoria, and sent onward by a different route than the sender had proposed but one that was more direct and probably faster.

An indistinct datestamp recorded its transit of Cairo, Egypt, where it was censored a second time. The next postmark indicated arrival March 28 at Fort Lamy, Chad, and a third censorship examination at a Free French military station, followed by an April 18 postmark at Bangui, Ubangi-Shari. After that it was routed overland via Bozoum in the northeast near the Chad and Cameroon borders, to the remote Karre Mountain village of Bassai, about 300 miles from Bangui.

Airmail Over and Through Five Continents

In my June 16 Linn’s Spotlight column on World War II military airmail (page 50), I pictured and analyzed a 1945 registered cover from a father in Fargo, N.D., to his son in the U.S. Army at a time when the son was being deployed from Europe to the West Pacific. The cover had crossed the Atlantic Ocean twice and the Pacific three times before being delivered, for a total of five transoceanic flights, the most I have seen on a nonphilatelic cover.

But that cover had traversed only two continents, North America and Europe.

Shown is a cover that touched five continents on its journey from Switzerland to Australia. It was mailed March 6, 1941, at Ascona and routed to Lisbon for the trans-Atlantic leg of its trip. Just a few weeks earlier, Pan Am had inaugurated a westbound route for its FAM-18 flights to New York via Bolama, Portuguese Guinea, and Natal and Belem, Brazil, to avoid the fierce winter headwinds over the North Atlantic.

That route took the cover from Europe, to Africa, and to South America. Between Brazil and New York, it made a censorship call at Port of Spain, Trinidad. From New York, it crossed North America on a domestic flight to make a FAM-19 connection for transport to New Zealand. From Auckland, an Australian airline carried it to Melbourne, where it was censored a second time before being delivered.

Those are my best examples. The next step of this challenge is up to readers. Please send images of your fifth dimension nonphilatelic covers to Linn’s editors for possible publication in a future issue.