The story behind the painting on new Italian Christmas stamp 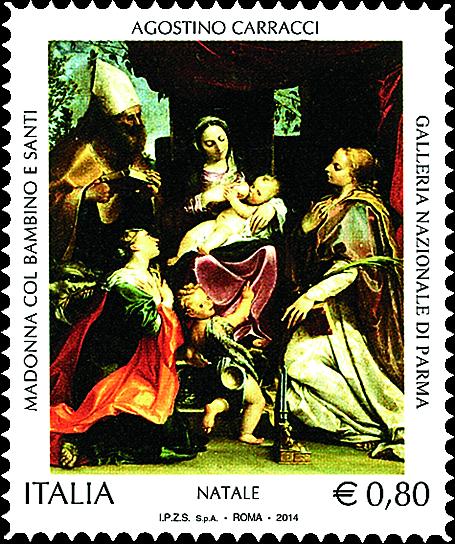 The €0.80 religious-themed stamp reproduces a 1586 painting by Agostino Carracci titled Madonna with Child and Saints, one of the many treasures of the National Gallery of Parma.

The painting shows Mary breast-feeding Jesus in the center and includes St. Cecilia at right, a young and chirpy St. John the Baptist at Mary’s feet, a kneeling St. Margaret at left and St. Benedict standing at left.

Each saint is pictured with various symbols. For example, St. Cecilia is holding a martyrdom palm, has a book on her lap and a small portable organ at her feet.

St. Margaret is holding a cross to her chest and behind her is a dreadful drake in a menacing posture.

It is the presence of St. Margaret in the painting that provides a clue to the identification of the person who commissioned the painting: Margherita Farnese.

For political reasons and with a huge dowry in solid gold, in 1581, at age 13, she married the Duke of Mantua, Vincenzo Gonzaga. Unfortunately the marriage ended in less than two years amidst scandalous allegations.

However, the truth was rather sad, because due to a physical malformation Farnese was deemed barren. The marriage was annulled by Cardinal Carlo Borromeo, and she became a nun in a Benedictine convent in Milan, taking the name of Sister Maura Lucenia. In due course, she moved to the St. Paul’s Monastery in Parma, where she enjoyed some singular privileges, such as having a teacher of music, Giulio Cima, a 20-year old whom she had known in earlier years at the court.

Shameful rumors suggesting that she was having an affair with Cima were circulated. An inquest revealed that Sister Maura reveled in the “profane” songs of the music teacher. Cima was incarcerated, and the seclusion of Sister Maura was enforced. However, some money, supposedly supplied by Sister Maura, made it easy for Cima to escape from jail and reach Mantua, where the Gonzaga family gave him protection.

In the meantime, she had commissioned Carracci to paint Madonna with Child and Saints for the monastery.

The most striking elements are the drake ready to snatch St. Margaret, and the portrayal of St. Cecilia in such a way as to evoke Sister Maura’s innocence and her chaste love for music.

Sister Maura was elected 10 times as abbess of the St. Alexander’ Monastery in Parma, where she died in 1643.