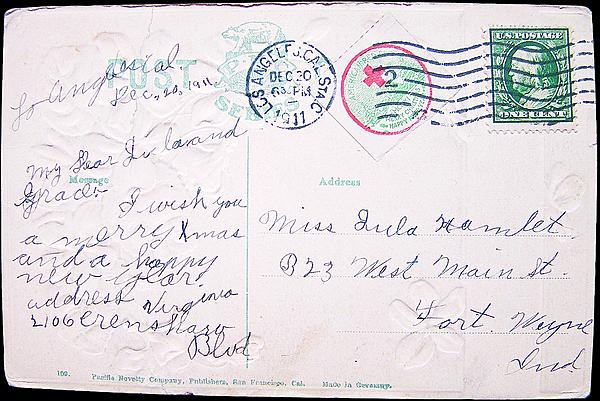 The eighth known tied example of the 1911 type 4 United States Christmas seal sold recently on eBay for nearly 3½ times its value as listed in Green’s Catalog of the Tuberculosis Seals of the World Part I, setting a new eBay recor

An example of a rare United States Christmas seal tied on a postcard set a record sale price in an eBay auction that closed Nov. 4.

The 1911 type 4 seal is the second-rarest U.S. Christmas seal, with an estimated 35 known examples.

The variety is not listed in the Scott Standard Postage Stamp Catalogue, but it is identified in Green’s Catalog of the Tuberculosis Seals of the World Part I, U.S. National Christmas Seals.

The ongoing official census of tied U.S. Christmas and Easter seals conducted by the Christmas Seal and Charity Stamp Society shows this to be only the eighth known tied example of the 1911 type 4, and the first discovered in eight years.

The type 4 seal has the same design as the type 2 (listed in the Scott U.S. Specialized catalog as Scott WX8), except with green windows in the house that is shown in the center of the design, and green berries at the sides of the greetings near the bottom.

These features are red on the type 2 seal.

Additionally, the type 4 seal is rouletted rather than perforated. Red roulette lines are visible on most examples.

In actuality, this seal variety is a local, issued as a provisional in Los Angeles, Calif., because of a local shortage.

Of the now eight known examples, seven have Los Angeles postmarks, and one has a postmark from Long Beach.

This most recent example is not enhanced, so it has an official base catalog value of $1,000. The eBay auction for it realized $3,433.83, nearly three and one-half times its Green’s catalog value.

If the cover had enhancing factors, such as an accompanying commemorative postage stamp, a foreign mailing destination, a nonphilatelic Christmas Day postmark, multiple seals, or affixed to an envelope (postcard use was overwhelming during the early years of seals), the catalog value would have been higher. This makes one wonder what sale price would have been realized for an enhanced example.

The postcard bearing the type 4 seal was postmarked Dec. 20, 1911, at Station C in Los Angeles and mailed to Fort Wayne, Ind.

The eBay seller is an antiques and collectibles dealer in Louisville, Ky.

Thus, the postcard appears to have stayed generally in the region to which it was mailed, and likely was in someone’s attic, garage or basement until the owner decided to sell off old family postcards, unaware of what value lurked among them.

The buyer is a member of the Christmas Seal and Charity Stamp Society and said that he willingly paid the price because this great rarity had been on his want list for many years, and he decided to seize the opportunity to obtain this example when it was offered.