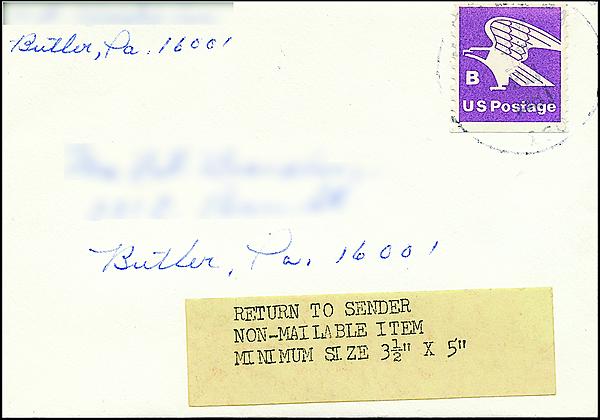 Despite being correctly franked for the first-class letter rate, this mid-1981 small envelope (actual size) did not meet the minimum-size standards effective since July 1979. 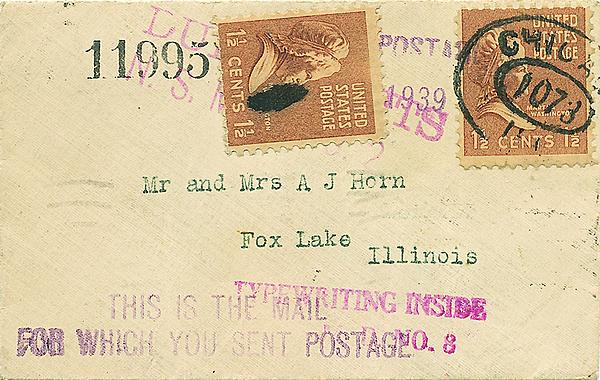 This tiny 1939 cover, shown actual size, was underpaid at the third-class rate: a typewritten enclosure made it first-class mail, requiring 3¢ postage.

Many of us have seen or collected small to tiny envelopes. These miniature mailpieces often are called “ladies’ covers,” with embossed or other decorative elements, but may just be different types of ordinary covers.

Since 1860, United States postal laws and regulations regarding the minimum size of first-class items mostly were mute concerning letter mail, although in 1898 came the first official statement concerning postcards.

This minimum-size postcard allowance changed to 2¾ inches by 4 inches as of Postal Bulletin 8233 (Mar. 4, 1907). Subsequent Postal Laws and Regulations of the United States of America repeated this limitation but never commented upon the minimum size for first-class letters.

In fact, the only mention of envelopes’ size limitations that I can find were in very infrequent admonitions, such as that in Postal Bulletin 12707, Nov. 8, 1921. This warning was concerned with the Christmas mailing of small-sized cards and envelopes, and was directed at newspapers, asking for their help in alerting the public.

The Post Office always needs your assistance, but in one particular especially, just at this time.

During the holiday season large quantities of very small envelopes and cards are put into the mails with the result that all postal work is very much retarded and mail disfigured and mutilated.

This is not generally known to the public, and we want you to help us to do a little educating.

The minimum size of cards and envelopes should not be below 2¾ by 4 inches for the following reasons:

1. Addresses will be obliterated by cancellation mark.

2. Too small to be run through facing table, necessitating three extra handlings with consequent delay not only to this but other mail.

3. Delay in cancellation because of awkwardness in putting through cancelling machines.

4. Delayed through difficulty in sorting.

5. Liability to loss or damage as small sizes do not fit letter packages and cannot be tied securely.

These odd and diminutive sized pieces of stationery have come into use in the past few years and only appear now in any quantities at Christmas time when the whole postal institution is keyed up to top speed and trying to keep on top of the load.

We will greatly appreciate, therefore, your cooperation in helping us to get the public to use stationery of the proper size in order that the handling of all mail may be expedited.

Note that the minimum size mentioned, 2¾ inches by 4 inches, the official size limitation for postcards, was only a suggested limit for envelopes and, as we’ll see, didn’t become official for them until 1963.

This latter fact is emphasized by the tiny (3.6 inches by 2.3 inches) envelope shown here actual size.

This 1939 item was first mailed at the third-class single-piece rate of 1½¢ for up to 2 ounces, paid with the top-right-corner copy of the 1938 Presidential 1½¢ Martha Washington stamp (Scott 805). The cover was rubber-stamped “TYPEWRITING INSIDE,” a fact that made it first-class matter, and it was thus held for 1½¢ added postage, to make up the 3¢ postage for up-to-one-ounce first-class mail.

The addressee sent the due postage, as indicated by the second affixed Martha Washington stamp and the handstamp “THIS IS THE MAIL/FOR WHICH YOU SENT POSTAGE.”

Only in the Oct. 18, 1954, Postal Manual United States Post Office Dept., do we first see any definitive comment concerning first-class letter-mail size: a statement that there was “No Limit to size.” A few years later, in Postal Bulletin 20119 (Dec. 11, 1958), came the announcement that “Postmasters are being furnished a supply of lobby posters, Nos. 85 and 85-A, reminding postal patrons that effective July 1, 1959, the minimum size for envelopes and cards will be 2¾ × 4 inches.”

Additional limitations were cited that are omitted here for lack of space, but it’s important to note that as of 1963, official minimum-size limitations for postcards and envelopes finally were identical.

Eventually, all of the concerns first mentioned in Postal Bulletin 12707 of Nov. 8, 1921, were resolved, driving the new size standards stated in Postal Bulletin 21196 (June 28, 1979), effective July 15, 1979, because “Nonstandard mail often results in delays and damage to mail because it does not lend itself to machine processing.”

First, as of July 1, 1979, items that did not meet minimum size standards (at least 0.007 of an inch thick and 3½ inches high and 5 inches long) were unmailable. And, first-class mail weighing 1 ounce or less was considered to be of nonstandard size and subject to a 7¢ surcharge if the height exceeded 61⁄8 inches, length exceeded 11½ inches, or thickness exceeded ¼-inch, or height-to-length aspect ratio did not fall between 1 to 1.3 and 1 to 2.5, inclusive.

I have truncated these laws and regulations somewhat for brevity. For instance, there were some limitations to the rules, and they also applied for some types of third-class mail. Also, in subsequent years, the surcharge amount increased, and the limitations for unmailable and surcharged items changed.

The other cover illustrated on page 24, a first-class domestic letter (up to 1 ounce rate, 18¢) shown actual size, 4.5 inches by 3.1 inches, from mid-1981 (dated by its “B” nondenominated coil stamp, Scott 1820), demonstrates the 1979 rules, being nonmailable because it was not within the minimum size of 3½ inches by 5 inches, as the applied message on the envelope points out. Thus, it was correctly “RETURNED TO SENDER.”