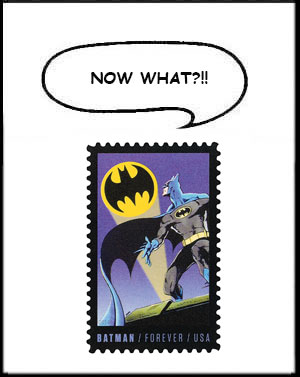 Steve Kotler of San Francisco, Calif., captures this theme: "Of course these stamps are self-adhesive. How else to better stick it to the public?"

The second theme relates to Batman slowing down as he ages. Michael Moticha, from Apple Valley, Calif., expressed it as, "This 24/7 work at my age should be prohibited by some sort of labor law!"

Walter Robidoux from Smyrna, Ga., was more direct with his entry, "Now What?!!" This entry also takes the prize as the nonphilatelic winner.

On the philatelic side, the winner is "Zing Pow — I'm being called! That Pesky Penguin must be perpetrating a re-perf!" by Tom and Laura Tomaszek of Cedar Rapids, Iowa.

"Oh no! The Joker's about to postmark me again!!" from Mike Lantz of Niles, Ohio.

"If it's self-adhesive, it'll be there forever," by Richard and Theresa Dojs from Missouri City, Texas.

"Disposed of the Joker … now to get to the stamp show," sent by Mark Gereb from Fort Lee, N.J.

"Babe Ruth, now there was a great Bat Man!" from John Shue of Forestville, Md.

"That reminds me, I need to spend some time with my socked-on-the-nose collection," by David Schwartz of Commack, N.Y.

"Can anyone use the extra 12 stamps now that I've made my FDC," sent by Jeff Vogel of New York, N.Y.

The next cartoon caption contest will be announced in the Feb. 9 issue of Linn's.