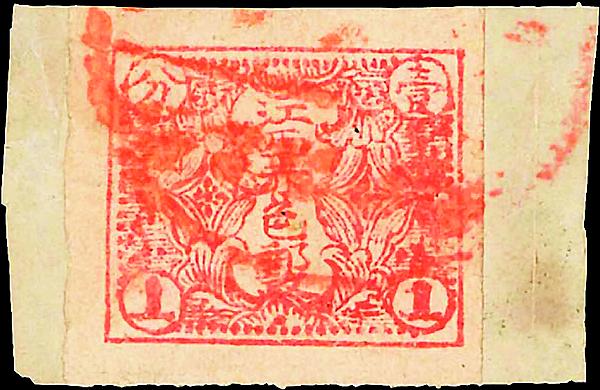 The peak stamp-auction season continued last November as Interasia, based in Hong Kong, held a sale Nov. 1-4 that saw total realizations of some $8.7 million. This put the firm’s total realizations for the year over $19 million, allowing them to claim a leading position among stamp auction firms in Asia.

The sale was so busy that the second day’s session reportedly ran for 15 hours, finishing at 1 a.m.

The top item was a local stamp issued in Jiangxi in 1931 by one of the so-called Red Posts established by Mao Zedong’s Communist revolutionary army, nearly two decades before the People’s Republic was proclaimed in 1949.

Due to the rapid progress of Mao’s campaign, the successive authorities in Jiangxi (then called Kiangsi) each survived only a brief time before the area was absorbed into Mao’s Chinese Soviet Republic, which lasted until 1937.

The unique imperforate Jiangxi 1¢ rose-red local on newsprint is tied to a small piece by part of a circular, undated postmark in red. It was described as the “rarest and most important” of the Chinese Red Post issues.

It is listed in N.C. Yang’s Postage Stamp Catalogue of the People’s Republic of China as RP9.

As the Interasia auction catalog recounts it, “Li Guo Fang began collecting stamps in 1930 at the age of ten … His father, who was a doctor with the Fujan Customs and Posts and a collector in his own right of antiques and calligraphy, was given an envelope from a colleague … Knowing that his son was a keen stamp collector, Li Guo Fang’s father passed it on to him for his collection.

“Unaware of its value, Li Guo Fang cut the stamp off the envelope for convenience and carried the stamp with him on his travels throughout China during the Japanese Occupation. His stamp collection was confiscated during the Cultural Revolution, but later returned to him.”

The stamp, an important forerunner to the issues of the People’s Republic of China, sold for about $415,000, including the 15 percent buyer’s premium added by Interasia to all lots.