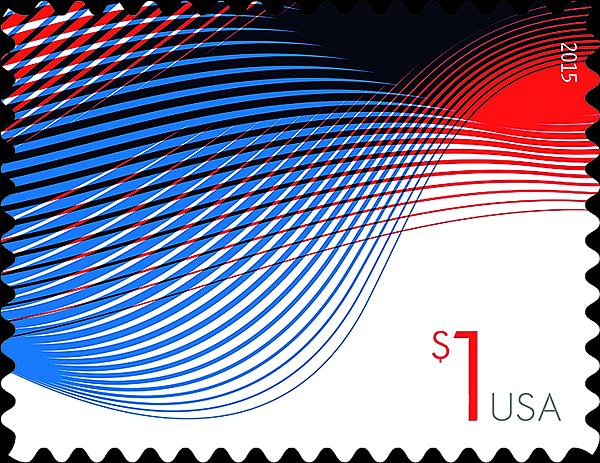 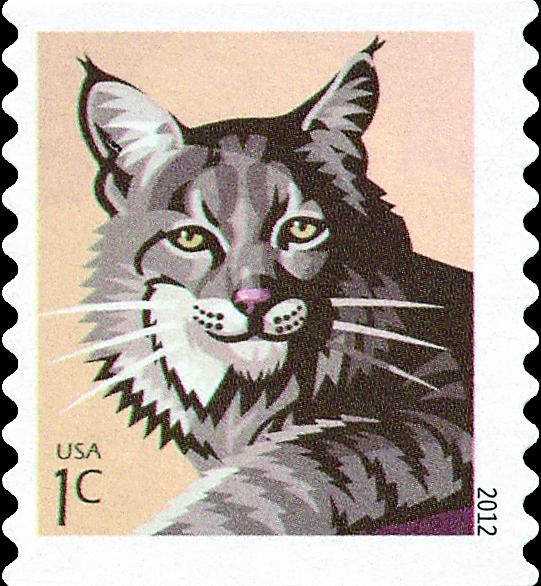 The United States 1¢ Bobcat self-adhesive coil stamp with 2012 year date. The Postal Service will issue a 2015 variety of the 1¢ Bobcat coil Feb. 21 in Mesa, Ariz.

The United States Postal Service has provided new issue date and location information for some of its previously announced 2015 stamps, and revealed that a new variety of the 1¢ Bobcat self-adhesive coil will be issued Feb. 21.

These updates were provided by USPS acting director of stamp services Cindy Tackett during a Dec. 9 teleconference.

As Linn’s previously reported, the Battle of New Orleans forever stamp in the War of 1812 series will be issued Jan. 8, and appears to be the first U.S. issue of 2015.

The stamp will be issued in Chalmette, La.; Chalmette Battlefield, where the last major battle of the War of 1812 took place in 1814, is just downriver from New Orleans.

The Battle of New Orleans stamp will be issued in a self-adhesive pane of 20.

Preliminary designs for most of the stamps described here were pictured in the Nov. 24 Linn’s Stamp News on pages 1, 26 and 27.

Jan. 12 will see the release of the new $1 Patriotic Wave stamp. The stamp will be issued in Kansas City, Mo., with no event planned.

The $2 counterpart to this stamp will be issued Jan. 30, also in a pane of 10, at the Southeastern Stamp Expo in Norcross, Ga., taking place at the Hilton Hotel Atlanta Northeast.

The $1 and $2 Patriotic Wave stamps will each be issued in self-adhesive panes of 10.

The Forever Hearts Love stamps with two different designs will be issued in January as well, Tackett said. A specific issue date has not been chosen, but the Postal Service plans to have these new stamps available well before customers begin mailing Valentine’s Day cards.

Early February will bring the Year of the Ram commemorative forever stamp to celebrate the start of the Lunar New Year. The year begins on Feb. 19, and the stamp is expected during the first week in February, with a ceremony in San Francisco, Calif.

Two Love-themed issues will appear on Valentine’s Day, Feb. 14: the Vintage Rose forever stamp, and the 70¢ Vintage Tulip stamp. Each stamp includes a small red heart in an upper corner, and will be issued as an option for mailing wedding invitations and RSVP cards.

Both are issues with engraved designs, and both will be offered as self-adhesive stamps in panes of 20. Plans call for the stamps to be issued in Riverside, Calif., at the American Philatelic Society’s annual winter show, Ameristamp Expo.

Another national stamp show will host a first-day ceremony one week later, on Feb. 21. The Aripex show in Mesa, Ariz., will present a 1¢ Bobcat self-adhesive coil in rolls of 10,000.

The Postal Service plans to have a 2015 year date inscription on the new stamp, USPS spokesman Mark Saunders told Linn’s.

Another ceremony at a stamp show is planned for March, this time at the popular March Party show in Cleveland, Ohio, sponsored by the Garfield-Perry Stamp Club. The issue date for the four Water Lilies forever stamps has not been determined, but the show is taking place March 19-21, so it’s expected the stamps will debut during that three-day window.

The Water Lilies set will be issued in a double-sided pane of 20 (convertible booklet format).

A self-adhesive pane of 20 stamps titled From Me To You, a single design, will be issued in March, according to Tackett, but no specific date or location has been determined.

The four Summer Harvest stamps in a double-sided pane of 20 (convertible booklet format) also have no designated date of issue or location, but the set is currently planned for June.

The United States Coast Guard forever stamp is penciled in for August and will be issued in a pane of 20. Again, no issue date or location has been announced.

Tackett said that additional stamps could be issued early in the year, but added that some details still have to be worked out before the stamps can be formally announced.

It is expected that a Black Heritage commemorative forever stamp will be issued in February; earlier reports identified the subject as architect Robert Robinson Taylor, with plans for the stamp to be issued in Tuskegee, Ala.

Linn’s United States Stamp Program for 2015 has been updated with the latest information.

Thanks to Jill Ambrose and the Plate Number Coil Collectors Club (www.pnc3.org) for information contributing to this article.