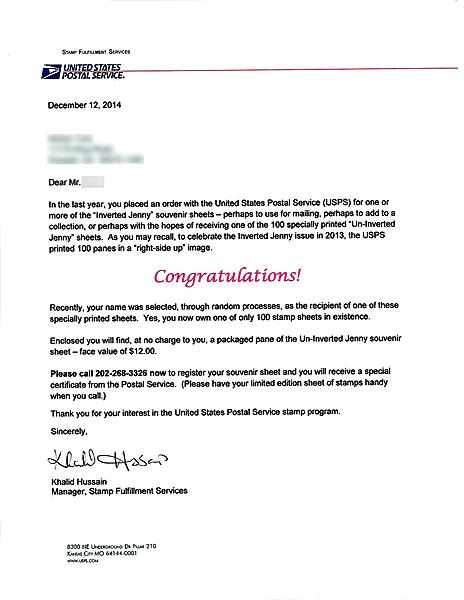 A copy of a letter from USPS Stamp Fulfillment Services manager Khalid Hussain, informing a lucky collector in Georgia that he is the recipient of a free upright $2 Jenny Invert pane of six. 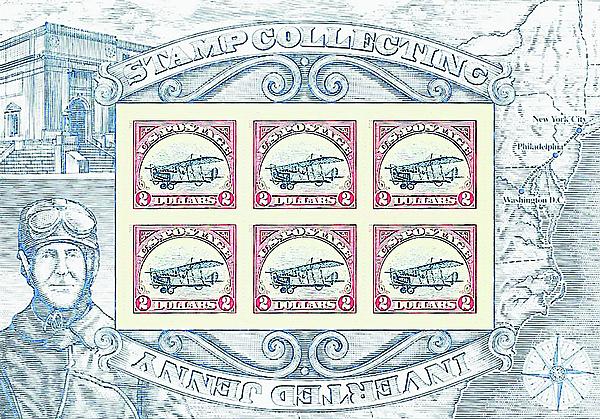 A collector in Georgia received this upright $2 Jenny Invert pane free of charge from the United States Postal Service in mid-December. It is the 21st upright Jenny pane in Linn’s census of those discovered and reported. Seventy-nine pan

In mid-December, a collector from greater Atlanta received, free of charge, a United States upright $2 Jenny Invert pane of six from the U.S. Postal Service.

The pane, No. 21 in Linn’s census of those discovered and reported, is illustrated nearby.

Accompanying the pane, according to the collector, was a letter dated Dec. 12, 2014, and signed by USPS Stamp Fulfillment Services manager Khalid Hussain.

Printed in large, red letters on the letter is “Congratulations!”

Below that exclamatory declaration, Hussain writes: “Recently, your name was selected, through random processes, as the recipient of one of these specially printed sheets. Yes, you now own one of only 100 stamp sheets in existence.

“Enclosed you will find, at no charge to you, a packaged pane of the Un-Inverted Jenny souvenir sheet — face value of $12.00.”

Hussain then advises the lucky Georgia collector to call the USPS to “register your sheet” to “receive a special certificate from the Postal Service.”

The Georgia collector provided a copy of the letter to Linn’s Dec. 30.

“I had been ordering about one Jenny Invert sheet a quarter,” the collector told Linn’s. “I was about to send in my December order, and I went out to eat with my wife Dec. 13.

“We got back late, and I stopped by my mailbox and noticed a parcel from the USPS.

“Later, I opened the parcel, and there’s a letter addressed to me, stating that I had been randomly selected to receive an upright Jenny Invert sheet.”

Also included in the parcel was the upright Jenny pane — still in its original sealed packaging.

The collector sent to Linn’s scans of the opaque envelope that contained the pane, the preprinted “Congratulations!” card that accompanies each upright Jenny pane in its envelope, the cardboard stiffener, and the outer plastic wrap that keeps all the contents together.

There is no printing on the cards for the normal panes that depict the Curtiss Jenny biplane flying upside down.

This approach is outlined in the first paragraph of Hussain’s letter to the Georgia collector, just before the bold, red “Congratulations!” annoucement.

Hussain said that the number of SFS orders for Jenny Invert panes via postal mail, the USPS.com website and phone has been “small” to this point.

He then referred Linn’s to the Postal Service’s corporate communications division in Washington, D.C. USPS spokesman David Partenheimer told Linn's that those who purchased a Jenny Invert pane directly from a post office are ineligible to receive a free upright Jenny Invert pane via the random selection process described in Hussain's letter.

Linn’s first learned of the discovery of the 21st upright Jenny pane Dec. 23.

Another collector in Georgia — not the recipient of the free upright Jenny pane — informed Linn’s that stamp dealer Len Curtis of Collect ’em All of Roswell, Ga., had been contacted by the recipient.

Linn’s contacted Curtis, who said that the pane likely will be displayed at the Southeastern Stamp Expo, to be held Jan. 30-Feb. 1 in Norcross, Ga., northeast of Atlanta.

“I will display the sheet at the SSE show in January,” the collector said. He also told Linn’s that he intends to put the pane on view at the Stamp Dealers Association of Georgia show in late February.

A total of 100 upright Jenny Invert panes were intentionally printed by the U.S. Postal Service.

Given the circumstances surrounding the 21st such pane to be reported, it appears that at least 99 of them were randomly inserted into the production run of more than two million panes that reproduce the famous upside-down plane vignette of the 1918 24¢ airmail error stamp.