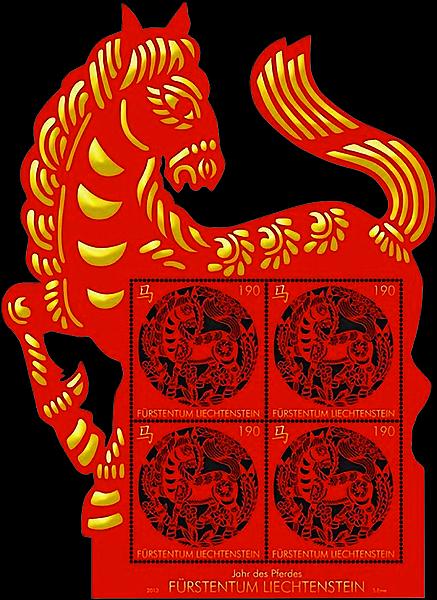 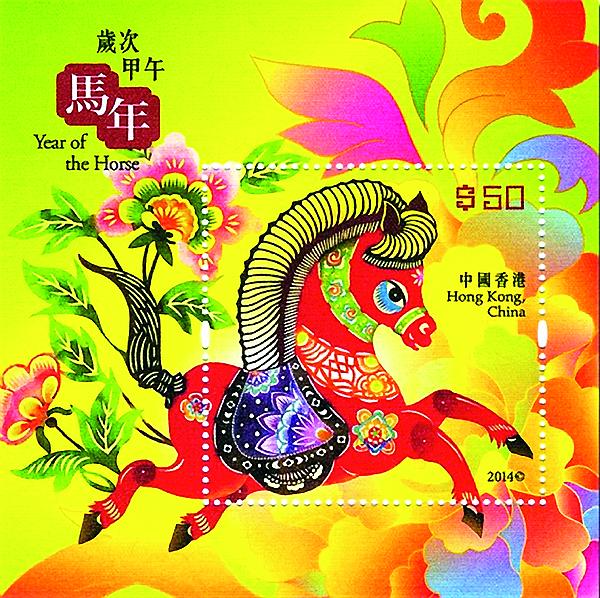 In addition to the stamps, Hong Kong also issued a silk souvenir sheet with a $50 Year of the Horse stamp. 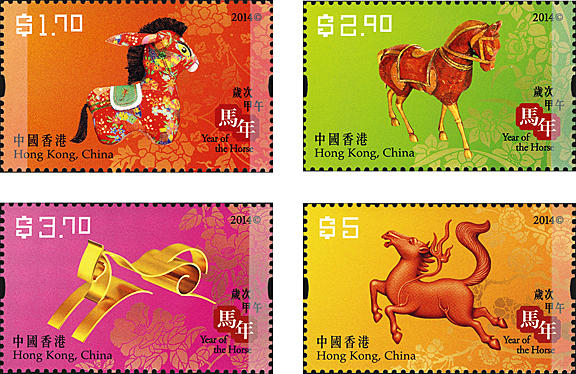 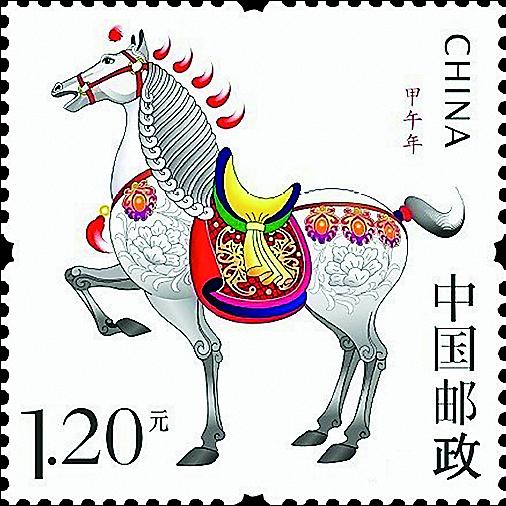 China received an honorary award in the Year of the Horse contest for stamps from other countries and China’s administrative regions.

Stamps from Hong Kong, Liechtenstein and New Zealand won a competition for the best Year of the Horse stamps.

The winning stamps were selected by these members and a jury of 25 experts.

The society members and experts were asked to select the three best Year of the Horse stamps, and 1,300 votes from China, Taiwan, Hong Kong, Macau, Australia and the United States were received.

China’s Year of the Horse stamp was not eligible because the contest focused on stamps from other countries and special administrative regions. The panel gave China’s 1.20-yuan stamp issued Jan. 5, 2014, an honorary award.

The shape of the white horse shown on the stamp is modeled after the tricolored porcelain horse of the Tang dynasty (618-907). The peony patterns on its body symbolize wealth and good luck, while the two bats drawn on the saddle represent instant blessings.

Printed with a special silver ink, the stamp sparkles with metallic luster that appears to change when viewed at different angles.

Shaohua Chen designed this stamp, as well as previous stamps in this multiyear series.

For the Year of the Horse design, he originally submitted a dark horse in military body armor. After this design was rejected, he changed the color of the horse to champagne and finally to the white horse.

According to the certificate of authenticity, this sheet was produced with 100 percent genuine silk made in Italy.

Hong Kong Post began issuing stamps featuring the animals of the Chinese zodiac in 1967. The 2014 Year of the Horse issue is the third set in the fourth series of Lunar New Year stamps. Each series continues for 12 years.

The Chinese Shengxiao Philatelic Society’s Nov. 5 press release about the competition complimented Hong Kong’s stamps for their prominent theme, colorful auspicious patterns, and the festive floral pattern in the selvage.

Liechtenstein issued its third Chinese zodiac stamp Nov. 11, 2013, to celebrate the Year of the Horse. Following the pattern of the previous two years, Liechtenstein used a laser paper-cutting technology to create a postage stamp in silhouette form. The typography was executed by hot stamping on gold foil.

An innovation is that the entire four-stamp sheet has been cut out in the shape of a horse.

The press release about the competition mentioned the horse shape of the sheet, the exquisite workmanship and the beauty of this novel design.

New Zealand issued four Year of the Horse stamps and a souvenir sheet Jan. 8, 2014. This set received 297 votes, and for the third consecutive year, New Zealand has placed third in the poll.

The New Zealand designs represent the strong, successful coexistence of the Chinese and New Zealand cultures. The images on the stamps are shown against a background of New Zealand as “the land of the long white cloud.”

The 70¢ stamp depicts a Chinese calligraphic horse. Many Chinese characters are derived from pictograms, stylized drawings of the objects they represent.

It is a Chinese tradition to paste red paper-cuts on the doors of houses to bring good luck and happiness to the families who live there.

The $1.90 stamp features a line art illustration of the equestrian sport of show jumping, linking the image of the horse with the Chinese lunar year.

The $2.40 stamp pictures the Rotorua Museum of Art and History, red lanterns and fireworks.

The $1.90 and $2.40 stamps represent cultural links between China and New Zealand.

The press release about the competition said that the New Zealand’s Year of the Horse stamps reflect the combination of Chinese culture and local culture in a creative, fresh and festive manner.

The United States Year of the Horse received 17 votes, coming in 33rd place, the midpoint for all 65 countries or special administrative regions included in this contest. The central design of the U.S. stamp features drums, not a horse.

The votes received for any one country or administrative region were lower than those in the 2013 (Year of the Snake) contest for two reasons.

First, the competition was only open to member of the Chinese Shengxiao Philatelic Society. It reduced the source of the voters.

Second, more countries issued Year of Horse stamps (65, compared to 46 in 2013), which led to the dispersion of votes.

Many of those countries issued Chinese Zodiac stamps for the first time in their history.

The competition committee printed a postcard picturing the three top Year of the Horse issues.

Only 52 voters whose votes matched these three issues were sent this postcard Dec. 1 signed by the president of the Chinese Shengxiao Philatelic Society, Zhou Zhi-hua.

Also, three special awards and 30 lottery winners will be selected Jan. 5, 2015, in Suzhou, China, at the first-day ceremony of the Year of the Sheep stamp.

Dingguo Dai is a chemist living in Arizona. He writes philatelic columns for the Chinese monthly Philately, Shanghai Philately and for the Chinese journal World Weekly published in the United States. He also was a jury member for the Year of the Tiger, Rabbit, Dragon, Snake and Horse stamp contests.