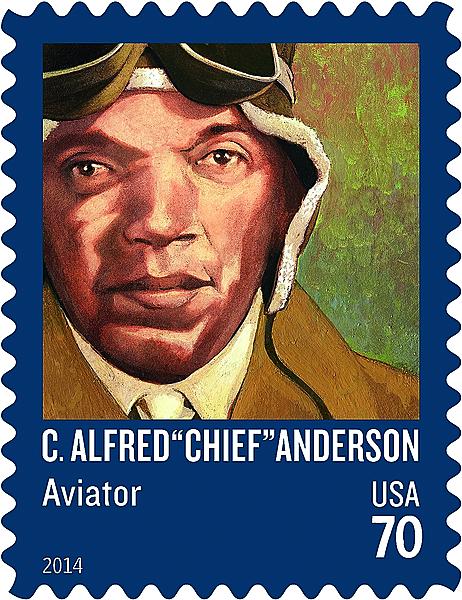 The United States 70¢ C. Alfred “Chief” Anderson stamp will be issued March 13 in his birthplace of Bryn Mawr, Pa.

The United States Postal Service will honor American aviator C. Alfred “Chief” Anderson on a 70¢ stamp to be issued March 13 in Bryn Mawr, Pa., and nationwide. Anderson was born in Bryn Mawr in 1907.

The stamp is being issued to fulfill the 2-ounce first-class letter rate in effect Jan. 26.

The stamp shows a portrait of Anderson and includes the inscription “aviator” under his name.

The first-day ceremony is planned for 1 p.m. in McPherson Hall at Bryn Mawr College, 101 N. Merion Ave. Roscoe Draper, a Tuskegee airman and flight instructor, will be one of the honored guest speakers.

Text printed across the back of the pane of 20 stamps describes Anderson’s life:

In the 1920s, flying an airplane was the dream of many a youth. When Charles Lindbergh made the first nonstop solo flight across the Atlantic in 1927, he became an international idol.

As a young African American from Bryn Mawr, Pennsylvania, C. Alfred “Chief” Anderson (1907-1996) shared the aspirations of flight common to his times. Although his skin color made his dream nearly impossible to realize — since flight schools denied admission to blacks — Anderson was determined to defy the odds. After teaching himself to fly, he obtained a pilot’s license in 1929.

Within a few years, Anderson was breaking flight records and inspiring other blacks to become pilots. In 1933, he and Albert E. Forsythe, an African-American physician, teamed up to become the first black pilots to complete a round-trip transcontinental flight. With that flight and with their goodwill tour to the Caribbean in 1934, they sought to prove to the world the abilities and skills of black aviators.

In 1940, Tuskegee Institute, a leading black educational institution in Tuskegee, Alabama, recruited Anderson to expand its civilian pilot training program. During World War II, Anderson served as chief flight instructor of a primary flying school that Tuskegee operated under a contract with the War Department.

The cadets who passed this first phase of training under the “Chief,” as they called him, would become part of the 99th Pursuit Squadron — the U.S. military’s first all-black aviation unit. Members of the 99th, along with members of several other flying units who began their training under Anderson, are today commonly known as the Tuskegee Airmen.

During the war, the Tuskegee Airmen flew thousands of sorties in the European theater, destroyed more than a hundred German aircraft, and received scores of Distinguished Flying Crosses. Their professionalism and effectiveness in combat was a significant reason the U.S. Air Force became the nation’s first armed service to desegregate in 1949.

For the rest of his life after the war, Anderson continued to pursue his passion for flying and for teaching others to fly. In 1967, he helped organize Negro Airmen International to encourage interest in aviation among African-American youth.

Anderson’s most famous passenger was first lady Eleanor Roosevelt. Anderson and Roosevelt made a 40-minute flight when she was visiting the Tuskegee Institute in 1941.

Anderson died April 13, 1996. Among his many accolades, he was inducted into the National Aviation Hall of Fame in 2013.

The Postal Service classifies the Anderson stamp as part of its Distinguished Americans stamp series, which began Aug. 24, 2000, with the 10¢ Joseph W. Stilwell stamp (Scott 2650).

The next 11 stamps in the series share designs similar to that of the Stilwell stamp, with the honoree illustrated by scratchboard artist Mark Summers and shown in the center of the stamp.

The subject’s name is inscribed in red reading vertically up to the left side of the portrait, and what he or she is noted for is printed in black reading down on the right.

Some of the portraits are printed in black only, and others are in color. But the background of each stamp is white.

The Postal Service also included the 84¢ Oveta Culp Hobby stamp issued April 15, 2011 (Scott 4510), in the Distinguished Americans series, although the design is quite different from the previous 12 stamps.

The Hobby stamp is larger than the previous issues in the series and uses a full color painting of the subject against a background of a neutral shade.

The designs of the 2012 Jose Ferrer forever stamp (4666) and the new C. Alfred “Chief” Anderson stamp are similar to that of the Hobby stamp.

Sterling Hundley created the portrait on the Anderson stamp. It is based on a 1942 photograph from a Tuskegee Institute flight training school yearbook.

Ashton Potter printed an initial quantity of 20 million stamps in panes of 20.

Press sheets, both with and without the die cuts that normally separate individual stamps, were produced in a quantity of 1,000 of each type. Each sheet consists of eight panes of 20 stamps and sells for $112.

Technical details for the Anderson stamp are provided in the box on this page.