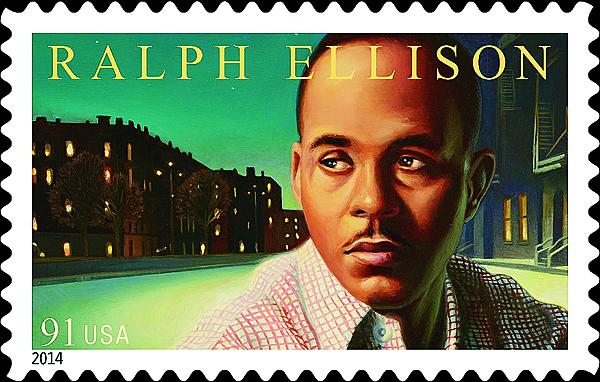 A United States stamp was issued Feb. 18 commemorating Ralph Ellison in the year of his birth centennial. The new 91¢ stamp honoring the author of Invisible Man is the 29th in the Literary Arts series that began in 1979.

Although events marking Ellison’s birth centennial are taking place during February and March in Oklahoma City, Ellison’s birthplace, the U.S. Postal Service issued the stamp with no first-day ceremony and assigned it a Kansas City, Mo., first-day cancel.

Artist Kadir Nelson created the stamp illustration in a horizontal format, depicting Ellison against a Harlem street scene at twilight.

The artists creating designs for the Literary Arts series have consistently followed a similar layout of a featured portrait with a relevant background scene since the 32¢ Tennessee Williams stamp was issued in 1995.

While there has been disagreement over the year of his birth, it is most commonly reported that Ralph Waldo Ellison was born March 1, 1914; some researchers maintain that he was born on that date in 1913.

He studied music and played the trumpet while attending Tuskegee Institute in Alabama. After moving to New York City, he began writing and publishing essays and stories.

He began writing his acclaimed novel Invisible Man after his return.

Steven C. Tracy, in A Historical Guide to Ralph Ellison, wrote, “In the novel, Ellison was recounting the story of the South-to-North migration of an intelligent but naive young African American in a racist and duplicitous landscape...”

Ellison’s groundbreaking book was a success, winning the National Book Award in 1953. He would not publish another novel during his lifetime, though he did produce essays and collections.

Press sheets, both with and without the die cuts that normally separate individual stamps, were produced in a quantity of 2,500 of each type. Each sheet consists of 10 panes of 20 stamps and sells for $182.

Technical details and first-day cancel ordering information for the Ralph Ellison stamp are in the boxes on this page. Collectors have a 60-day grace period to mail in requests for the first-day postmark.

First-day cancel ordering information
Collectors requesting first-day cancels are encouraged to purchase their own stamps and affix them to envelopes. The first-day cover envelopes should be addressed for return (a removable label may be used), and mailed in a larger envelope addressed to Ralph Ellison Stamp, Cancellation Services, 8300 Underground Drive, Pillar 210, Kansas City, MO 64144-0001. Requests for first-day cancels must be postmarked by April 19.
The Postal Service’s uncacheted FDC for the Ralph Ellison stamp is item No. 116516 at $1.35. USPS order numbers for stamps and FDCs also appear in Linn’s 2014 U.S. Stamp Program.