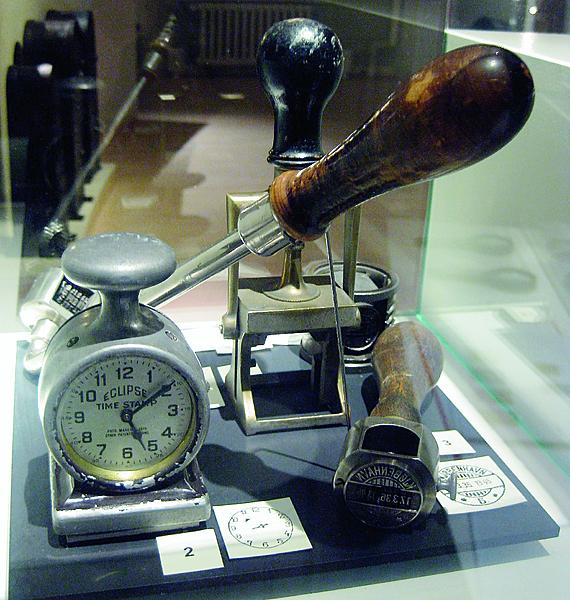 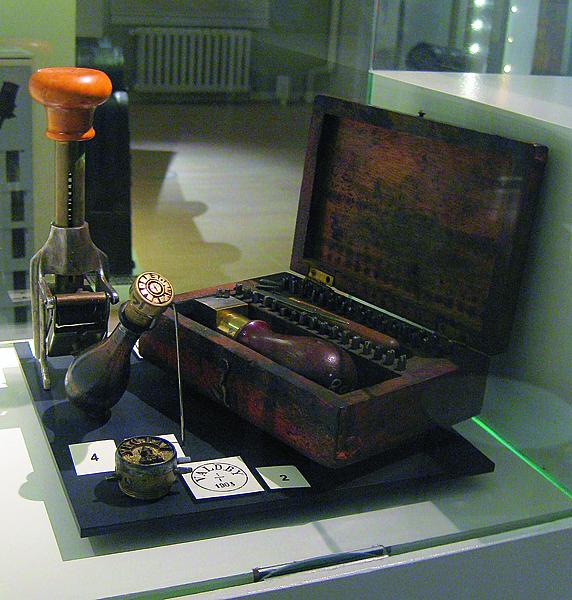 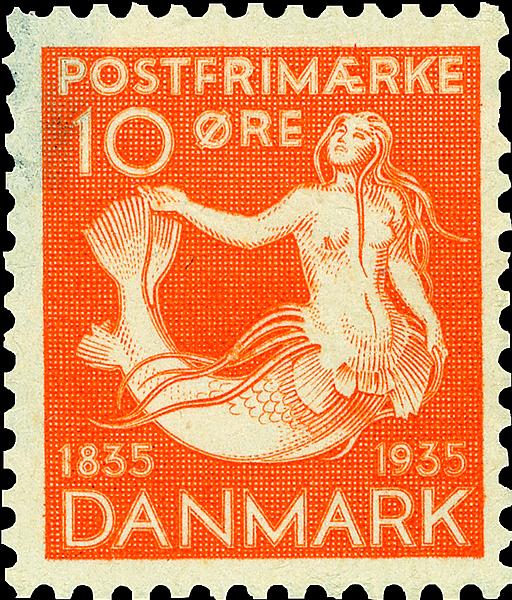 An essay for the 10o orange Little Mermaid stamp. The stamp, issued in 1935, was designed by sculptor Aksel Einar Utzon-Frank. At lower left in the display case is an approved proof for the stamp issue. 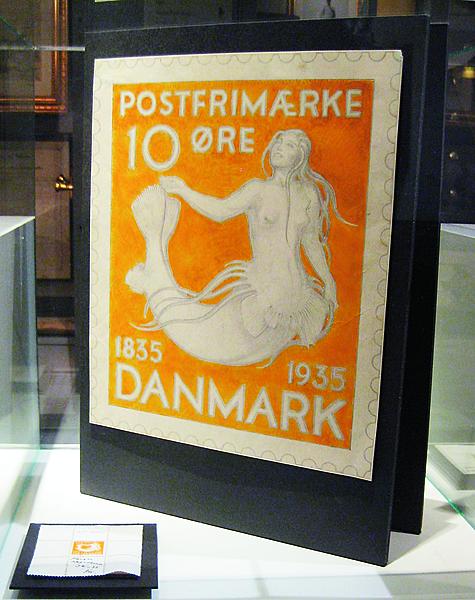 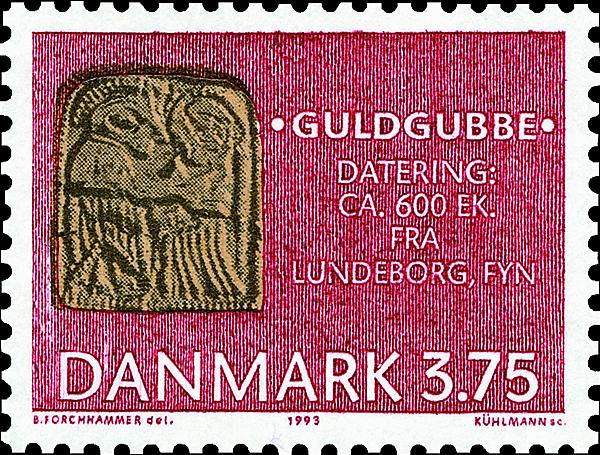 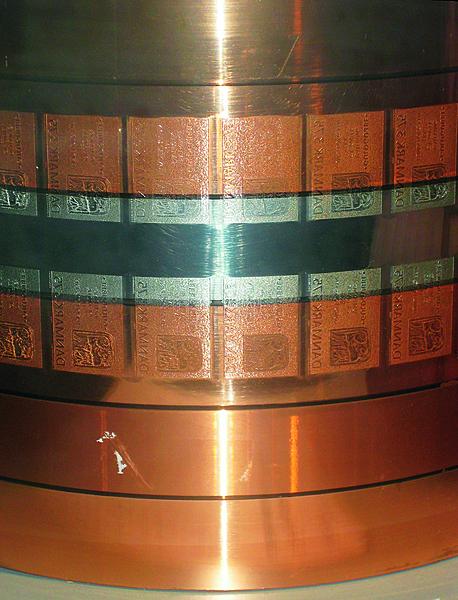 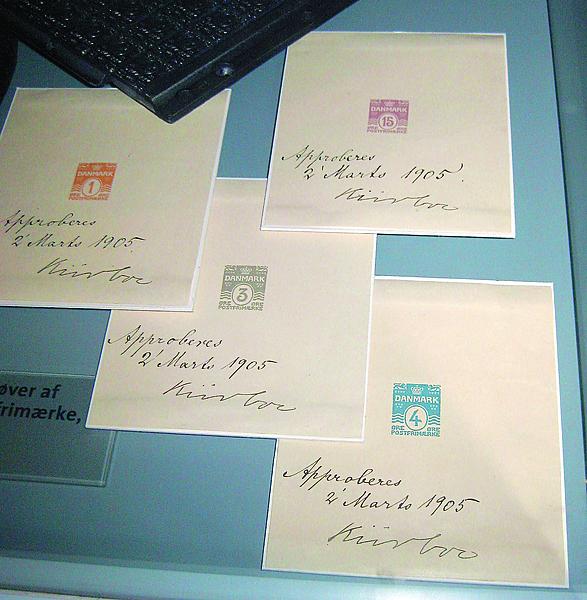 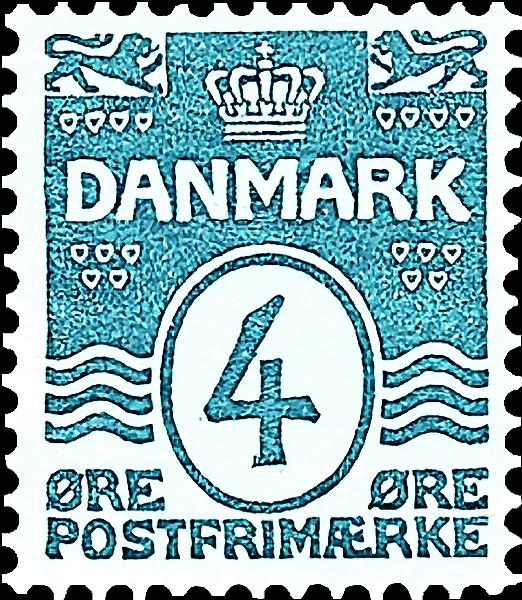 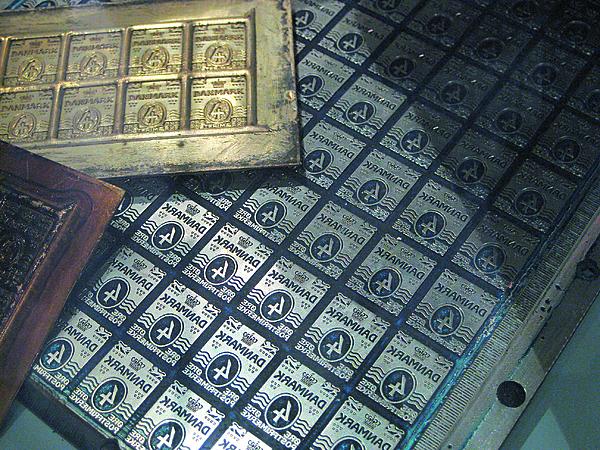 Denmark’s 1905 typographed Wavy Line issues began with the 4o blue. The basic design was created by Julius Therchilsen. Printing plates for the 4o stamp are displayed in the museum. 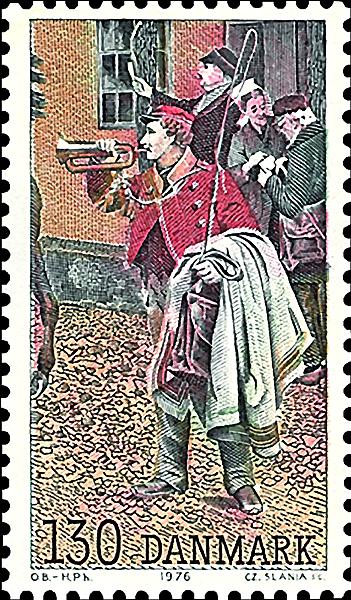 The museum’s display cases show artifacts of Denmark’s history of mail delivery, including the red and yellow postman’s uniform, and post horns that were used to alert residents that the mail had arrived. 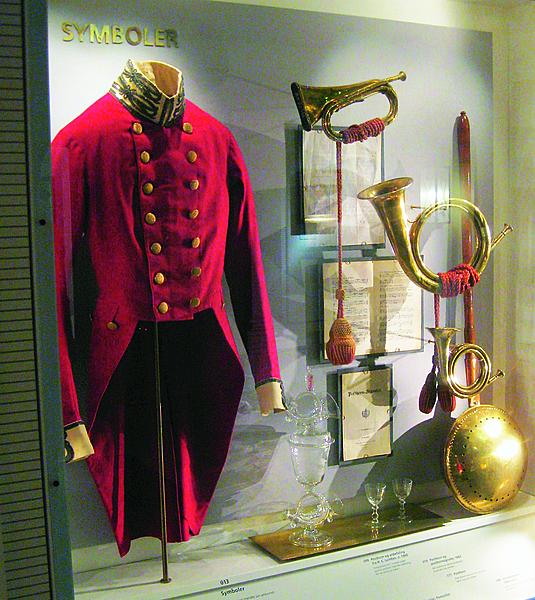 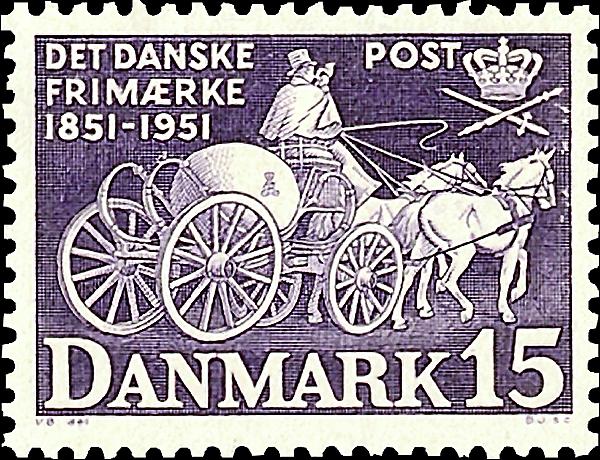 The spherical 19th-century mail coach greets visitors in the museum’s first exhibit room. The coach was featured on a pair of stamps issued in 1951 to mark 100 years of Danish postage stamps. 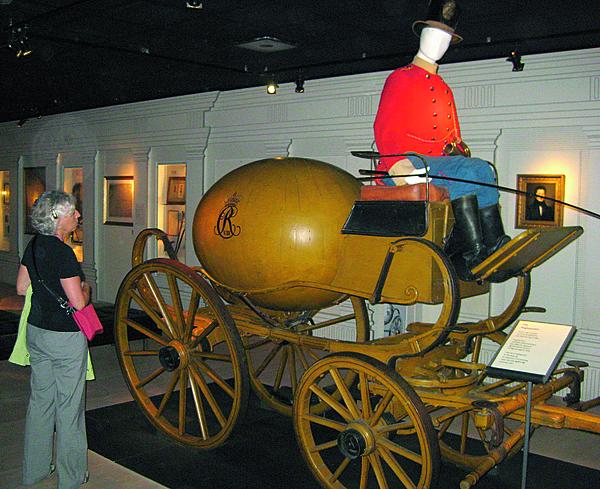 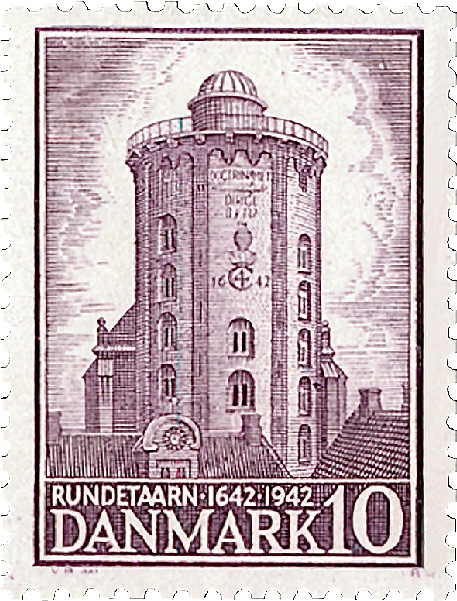 The entrance to Denmark’s Post and Tele Museum on Kobmagergade in Copenhagen is adjacent to the country’s oldest working post office (left). Just down the street is the famous Rundetaarn, or Round Tower, first commemorated on a Danish stamp 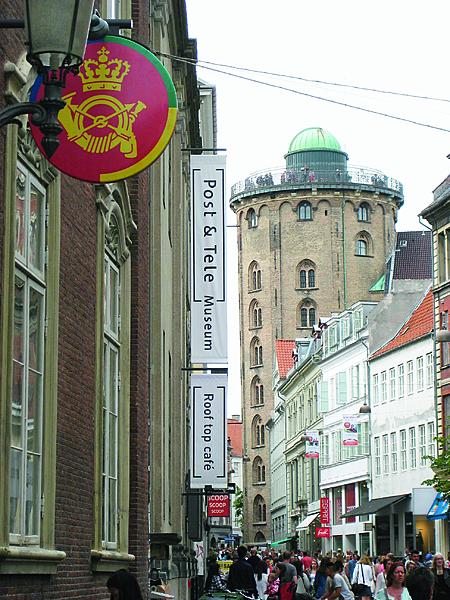 Only a few steps away from Copenhagen’s Stroget, the perpetually busy pedestrian walkway and shopping district in the city center, stands Denmark’s Post and Tele Museum, adjacent to the country’s oldest operating post office.

Just 150 yards beyond the front door of the museum on the popular Kobmagergade cross street is the famous Rundetaarn, or Round Tower.

Completed in 1642 during the reign of King Christian IV, the Rundetaarn adjoining Trinitatis Church was originally constructed as an observatory. Today, it is a popular tourist destination that provides an excellent view of the city from its rooftop platform 114 feet above street level.

The Rundetaarn also hosts various cultural exhibits throughout the year, and amateur astronomers still make use of the observatory at the top.

The Post and Tele Museum is a quiet oasis in the middle of bustling Copenhagen, with the sounds of the city disappearing once you step inside.

The museum’s central foyer includes a charming gift shop offering books, keepsakes, stamps and stamp-theme souvenirs. From the ground floor visitors also enjoy a view of upper balconies that display mannequins dressed as postal workers from throughout the years.

Open connecting rooms on the upper levels are filled with display cases and historic exhibits, and an elevator makes the museum accessible to all.

The museum traces the full history of communication in Denmark, including telegraphs and telephones, but visitors searching for a philatelic experience will find stamps and postal history nearly everywhere they look.

A centerpiece of the museum in the first exhibition room is a full-size reproduction of a spherical mail coach built, according to the museum, from the few remaining remnants of the original, following the 1815 plans.

A silent postman mannequin in full uniform guides a team of life-size wooden horses on the exhibit floor.

While the coach, sometimes referred to as ball post or post chaise, was created to protect mail from the elements, its unusual rounded configuration also prevented the postman from accepting paying passengers to add personal profit on his journey.

The side of the coach bears the royal monogram CR VIII, representing Christian VIII, king of Denmark from 1839 to 1848.

A 1951 set of two stamps commemorating the centenary of Denmark’s first postage stamp pictures the mail coach in action (Scott 330-331).

A second exhibition hall features an iceboat as part of a larger display chronicling the Danish maritime postal service. The boat, manned by a crew of five, was used to transport mail through the Oresund strait. Mail was carried within a leather pouch to protect it from the elements, including salt water.

Paintings and portraits throughout the museum help to tell the postal story. Display cases lining the exhibition halls feature artifacts relating to the posts, including uniforms, record books and timetables, maps, timepieces, and post horns of various sizes and shapes.

In Denmark and other European nations, the post horn was used by the postilion — the coach driver — to announce to all that the mail had arrived. But he would also sound the post horn during his journey to alert other travelers on the road that the fast-moving mail coach was approaching.

Museum signage conveniently provided in Danish and English explains that the red and yellow colors of the postman’s uniform, still associated with the Danish postal authority, Post Danmark, represent the royal house of Oldenburg.

Denmark featured a uniformed postilion blowing the post horn on a 130o stamp issued in 1976 to celebrate the Hafnia international stamp exhibition taking place that year in Copenhagen (Scott 590). A second, slightly different example of the same design is found on a 130o souvenir sheet also issued for the exhibition (591). The sheet shows the painting A String of Horses Outside an Inn by Otto Bache. The stamp, engraved by Czeslaw Slania, reproduces a detail of the painting.

One display also recreates a Danish post office from around 1850, as it was set up inside the postmaster’s home.

Included is one of the four printing plates used in 1851 to print Denmark’s first stamp, the 4-rigsbankskilling (Scott 2).

An early typographed Danish definitive series known as the Wavy Line issues was introduced in 1905 (Scott 57-64). The wavy line design with large central numeral of value is still in use today, nearly 110 years later.

The printing plates for the 4o stamp are displayed within a glass case in the museum. The designs were created by Julius Therchilsen, engraved by Christian Danielsen, and printed in Copenhagen by H.H. Thiele in sheets of 100.

The various rings of this model show the plain copper-plated surface through the many steps to create the working cylinder, including high-pressure treatment, the application of the stamp design to the polished cylinder, and finishing.

Visitors will find additional displays showing stages of stamp production, including an essay for the popular 10o orange Little Mermaid stamp issued in 1935 (Scott 248). The stamp was designed by sculptor Aksel Einar Utzon-Frank, based on the beloved story by Danish author Hans Christian Andersen. It was issued along with a 5o stamp portraying the swan from the tale The Ugly Duckling, and four stamps showing a profile portrait of the author.

The original artwork stands along with a single-stamp perforated proof marked with approval notations and initials, dated July 29, 1935. The Little Mermaid stamp was issued about two months later.

Museum visitors have a rare opportunity to see a full collection of Denmark’s issued stamps as well, from the very first issues of 1851 up through 1998. These are displayed alongside the 1856-1919 stamps of Danish West Indies, the 1905-2006 stamps of Greenland, the 1919-2006 stamps of the Faeroe Islands, plus smaller displays of certain issues from other countries.

Postal history fans will find numerous artifacts of interest in the museum’s exhibit halls, including postmarking devices used over the years, arranged in two side-by-side display cases. Among these are a time stamp and a familiar bridge-style handstamp, as well as a Lindenborg star-cancel handstamp from 1880. The different devices on display date from 1851 to 1913.

The museum includes some video and interactive exhibits, as well as dedicated displays telling the histories of telephone and telegraph communications in Denmark.