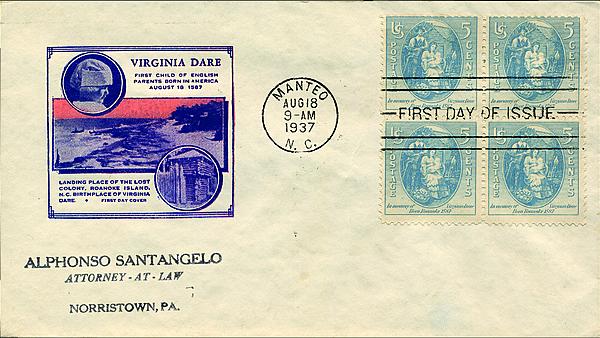 With the proliferation of computers in printing, from professional to home machines, we tend to take multicolor first-day cover cachets with illustrations and text for granted.

The first commercial FDC cachet is considered to be the one created by George W. Linn for the United States 1923 Warren Harding issue (Scott 610). The text-only cachet commemorated the late president.

Like Linn’s Harding FDC, many early cachets were printed in one color and consist only of text.

Through the 1930s, for all but the most expensive, high-end printing presses, each color in a printed piece required a separate pass through the machinery.

Artwork was restricted to simple generic line drawings that were supplied to printers (called “stock cuts”) and nongeneric artwork or photos that required processing (“screening”).

Text was first set by hand, with each letter put into place on the printing form. Later, text was generated for photo-offset presses by companies that specialized in typesetting at an additional cost.

It is no wonder that many of the early cachetmakers were printers.

It also makes 1930s FDCs, like the one shown here for the 1937 5¢ Virginia Dare stamp (Scott 796), that much more amazing. This Harry C. Ioor cachet uses two colors — Ioor was partial to purple — plus three screened photographs and text.

Ioor was an Indianapolis chiropractor who also owned a stamp shop with his sister. According to Stanley H. Fryczynski Jr., writing in the March-April 1961 issue of First Days, the shop contained a “printery,” and that is where his cachets were printed.

Cover producers of the 1930s used different techniques to distinguish their work from other cachets. House of Farnam, ArtCraft, Fleetwood and others used engraved printing plates, with the results distinguished by the raised printing. Some, like ArtCraft, used black ink. Farnam, on the other hand, almost always used a single bright color.

W.G. Crosby used thermography, where a resin powder was mixed with the ink then heated to form slightly raised printing, and pasted on small black-and-white photos. He often employed different ink colors, photographs and even overall designs for a single issue.

C. Stephen Anderson cachets are recognizable by the large amount of hand-lettered text. They are almost always printed in a single color, but often, quite a few different colors would be used for each issue. The challenge for Anderson collectors is finding all the colors for a given issue; no record was kept as they were printed.

By today’s standards, these 1930s cachets are primitive, not very colorful and, to some, not very attractive. Viewed in the context of their time, however, many of these pioneer cachetmakers overcame the technical limitations of the printing arts.