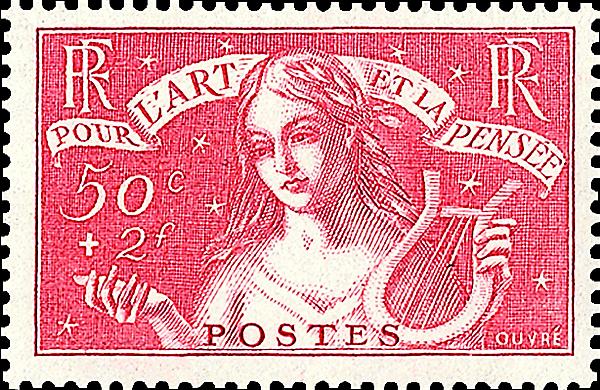 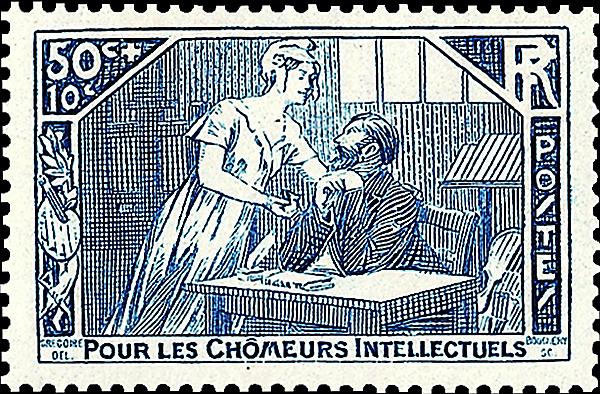 Figure 1. The first semipostal in aid of France’s needy intellectuals, issued in 1935, shows an allegorical Republic and an impoverished writer.

As this is being written, the United States Congress is continuing its often acrimonious discussion of many months with regard to extending benefits to the nation’s long-term unemployed.

The surtaxes for charity over and above the postage denominations range from 10 centimes to 20c, 25c and 50c, with one issue from 1935 (Scott B43) having a surtax of 2 francs.

That large donation was later determined to be excessive, however, and the stamp was surcharged in 1936 to alter the value to 50c+20c (Scott B47).

The first of these charity issues in aid of distressed intellectuals is shown in Figure 1, a 50c+10c stamp issued Dec. 9, 1935. It paid the basic letter rate and collected an additional 10c for the charitable cause.

The engraved design, printed in ultramarine, depicts an allegorical female representing the French Republic comforting a presumably impoverished writer in his humble attic. The caption translates as, “For intellectual unemployed persons.”

The stamp was designed by Rene Gregory and engraved by Omer Desire Bouchery, and 1.5 million were printed.

The second semipostal to benefit intellectuals, shown in Figure 2, was also issued Dec. 9.

The red stamp depicts a female symbol of music, but the words in the text banner read, “For Art and Thought” (Scott B43).

The denomination on this stamp is 50c+2fr, but less than a year later the same design was reissued with the 20c surcharge replacing the hefty 2fr surtax (Scott B47).

This stamp was designed and engraved by Achille Crafted (1872-1951), a well-known book illustrator of the early 20th century.

How did intellectuals in hard times come to be recognized as a discrete category of French society who were deserving of public support?

In the miserable economic wake of World War I, the Confederation des Travailleurs Intellectuels (Federation of Intellectual Workers, or CTI) was founded in 1920 to represent the cause of “knowledge workers,” generally defined as being those whose livelihood depended on mental effort and initiative rather than physical or mechanical labor.

France had begun issuing semipostal stamps during World War I, with surtaxes aiding causes including the Red Cross and war orphans.

In lobbying for an unemployed intellectuals’ semipostal, CTI gained the support of two important sympathizers: the Minister of National Education Marius Roustan and the Minister of Posts Georges Mandel, who had been a journalist before entering government.

The only expensive item in a complete collection of unemployed intellectuals’ semipostals would be the 1935 music issue with the 50c+2fr denomination (Scott B47), which has a catalog value of $125 in mint condition.

The majority of the other issues are valued at less than $10 each, within the budget of many collectors, intellectual or otherwise.