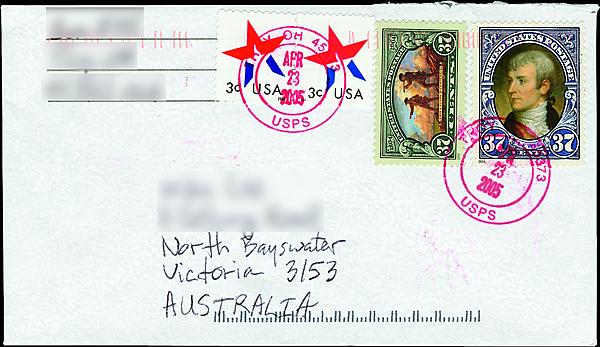 Part of the 80¢ postage on this cover sent in 2005 from the United States to Australia was paid with a 37¢ Meriwether Lewis stamp from the 2004 Lewis & Clark prestige booklet. 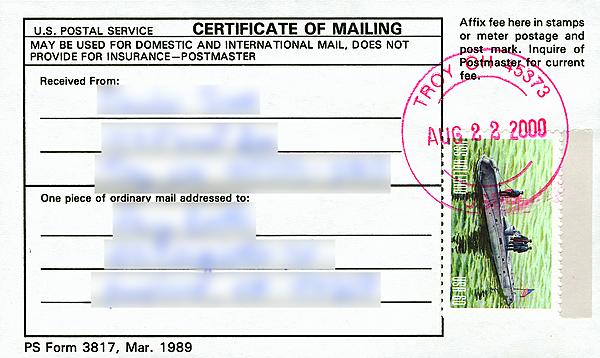 A United States 60¢ USS Holland stamp from the 2000 Navy Submarines prestige booklet satisfies in full the fee on this certificate of mailing postmarked Aug. 22, 2000.

The United States Postal Service broke new ground in 2000 when it issued its first souvenir, or prestige, booklet.

The subject was the U.S. Navy submarine service (Scott BK279).

Two more prestige booklets followed: one in 2003 that celebrated the U.S. flag displayed in various Americana art forms (Scott BK294), and a second in 2004 to honor the bicentennial of the Lewis & Clark Expedition (BK297).

I reported the release of the Navy Submarines booklet for Linn’s and was immediately impressed with the marrying of attractive stamps with illustrations and descriptive text that wove an interesting story about the U.S. Navy’s silent service.

And, of course, it was fun using the different Submarines booklet stamps on mail to friends and family.

The USPS Certificate of Mailing shown here is franked with a 60¢ USS Holland stamp (3376), which exactly satisfied the 60¢ fee for this service when it was postmarked Aug. 22, 2000, on the form.

Also illustrated is a small cover sent to Australia in 2005. Part of the 80¢ postage is paid with a 37¢ Meriwether Lewis stamp from the booklet (3855).

Almost 10 years later comes word from Postal Service headquarters that a prestige booklet is being contemplated for a 75th-anniversary Batman stamp that might be issued in July.

If a Batman prestige booklet is in the offing, the Postal Service would do well to recall some of the pitfalls that affected the earlier booklets.

Collectors balked at the $9.80 face-value cost of the Submarines booklet, and they complained about the five different denominations of stamps on the two panes in the booklet, which ranged from 22¢ to $2.40. Only one of the five, the 33¢ Los Angeles Class stamp, was readily usable on mail.

Furthermore, the Submarine stamps were lick-and-stick, which meant the noncollector public never saw them. Even then, people were gravitating toward self-adhesive stamps.

For the Lewis & Clark booklet, the USPS tacked on a premium of $1.55 to the $7.40 face value of the 20 stamps. Again, collectors expressed their displeasure.

To ensure that the public sees and (hopefully) buys a Batman prestige booklet, the stamps should be self-adhesive, of a single denomination and sold at face value.

Regardless of the ultimate format, a stamp for Gotham City’s Caped Crusader is likely to be a hit.

We quickly followed suit with our own story that day on Linns.com.

As Jay Bigalke details in a story on page 10, the variety of personalities and topics either approved for a stamp design or under consideration should give most collectors some to cheer, or jeer, as the case may be.