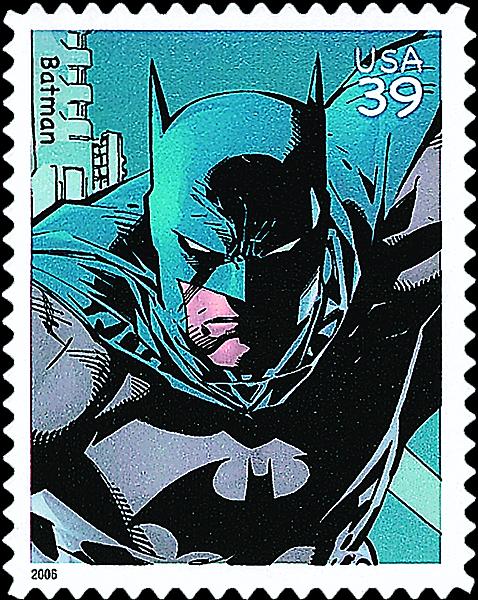 One of the two United States 39¢ Batman stamps issued in 2006 as part of the 20-stamp DC Comics Superheroes set.

A new United States stamp to celebrate the 75th anniversary of Batman is being planned for July. The stamp would be issued at the annual Comic-Con convention planned for San Diego July 24-27, according to a briefing sheet prepared by the U.S. Postal Service.

The stamp would mark the caped crusader’s second appearance on a U.S. issue. Two 39¢ Batman stamps were included in the DC Comics Superheroes set in 2006 (Scott 4084).

Warner Brothers will supply the Postal Service with artwork for the stamp. The film company and DC Comics have agreed to promotions for the stamp that would extend into 2015.

The format for the Batman stamp is not fixed, but the briefing sheet suggests the “potential exists for non-traditional (non-rectangular) stamp souvenir sheet, also a prestige booklet.”

Janet Klug, the new chair of the Citizens’ Stamp Advisory Committee, is listed as the sponsor of the stamp in the paper.

The Batman stamp would be used to “encourage stamp collecting for all ages, while creating a pane of stamps that is timely ... relevant, contemporary and fun,” according to the paper. “This would be a great 2014 Blockbuster,” it says.

The Comic-Con website has not announced its program for this summer, but it recently added Gregg Hurwitz of Los Angeles, a Batman book and film author, to its list of guests.

About the Batman stamp issue, Susan McGowan, executive director of Stamp Services at the USPS, told Linn’s, “We’re unable to confirm that at this time.”