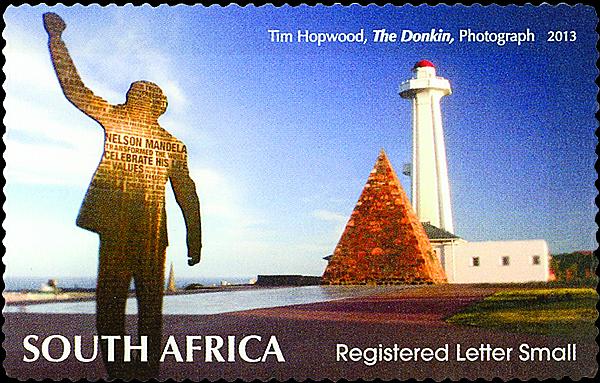 Figure 3. A sculpture of Nelson Mandela at Donkin Reserve in Port Elizabeth is featured on a registered mail stamp issued July 26. 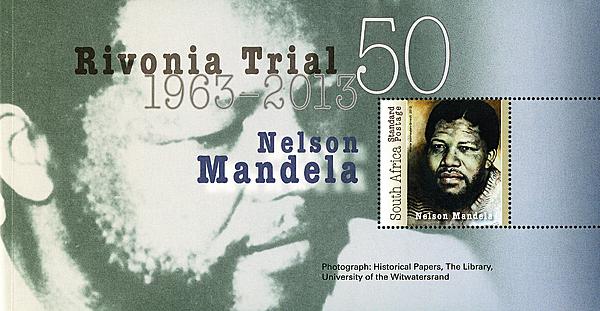 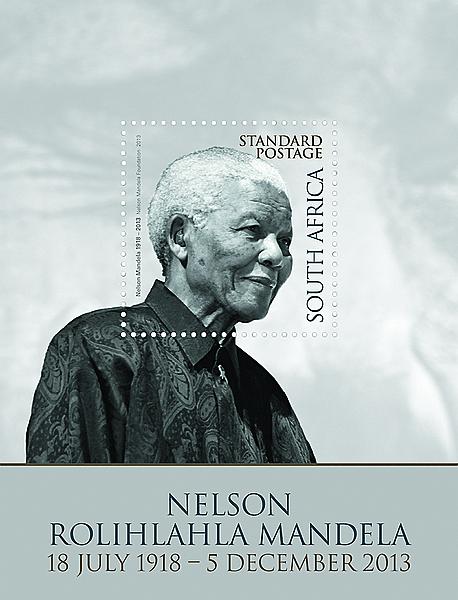 Figure 1. South Africa issued a souvenir sheet Feb. 11 in tribute to Nelson Mandela. The sheet is only sold in a souvenir folder.

Several previous South African stamps honor Mandela, including one released just a little more than a week before his death Dec. 5, 2013, at age 95.

The Feb. 11 issue date of the souvenir sheet coincides with the 24th anniversary of Mandela’s release from prison Feb. 11, 1990, after 27 years of incarceration.

Four years later, on May 10, 1994, Mandela was inaugurated as South Africa’s first black president and its first democratically elected president.

In the press release announcing the sheet, the post office said it was “printed in silver to reflect the richness of Mandela’s wisdom, his legacy and his stature...”

The press release also sums up his life: “In Nelson Mandela’s 95 years he accomplished what many thought impossible. Held prisoner for 27 years and later becoming South Africa’s first democratically elected president, he practiced reflection, negotiation, forgiveness, reconciliation and incredible perseverance, making him one of the most remarkable and respected individuals of modern times.”

The South Africa Post Office is selling the sheet in a souvenir folder at a cost of 50 rand. The sheet is not available separately.

For each sheet sold, the post office will donate 2r to the Nelson Mandela Foundation for use in building libraries as part of the Mandela Day literacy project.

Joh. Enschede of the Netherlands printed it by offset in a quantity of 5 million.

Three South African stamps issued in 2013 are related to Mandela.

The most recent of these is in a booklet commemorating the Rivonia trial of 1963-64.

This prestige booklet includes 12 panes of stamps, plus text and photographs. It originally was scheduled to be issued July 11, but its release was delayed until Nov. 26.

The first paragraph in the booklet stresses the importance of the trial: “The Rivonia Trial was a landmark event in South Africa’s history. Often referred to as ‘the trial that changed South Africa,’ it set off a chain of events that eventually ended apartheid and rang in democracy and freedom from oppression.”

Each of the 12 members of the African National Congress accused under the 1962 Sabotage Act is shown on a stamp in a separate pane in the booklet. Mandela received a life sentence. The stamp pane featuring him is pictured in Figure 2.

Goldreich and Wolpe escaped before the trial.

All of the stamps in the Rivonia Trial booklet are nondenominated, paying the standard postage rate.

The other two 2013 stamps related to Mandela are registered mail stamps issued July 26 in a pane of 10 marking the 100th anniversary of the city of Port Elizabeth (Scott F2).

The other stamp, pictured in Figure 3, shows a sculpture of Mandela at Donkin Reserve.

This laser-cut silhouette figure is part of a larger sculpture group created by Anthony Harris and Konrad Geel.

Called The Voting Line, this work represents and connects the lines of voters in South Africa’s first democratic elections.

The set includes three other stamps featuring the anthem, the flag and the governmental complex in Pretoria known as Union Buildings.

The recipient of the 1993 Nobel Peace Prize, Mandela was included on a pane of 10 stamps issued Nov. 4, 1996, commemorating South African Nobel laureates (Scott 955i).

In 2001, South Africa issued a booklet of 10 airmail stamps and two postcards called the “Many Faces of Nelson Mandela” (Scott C56).