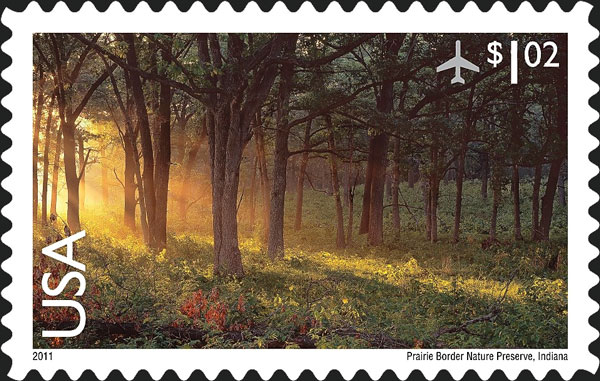 The Prairie Border Nature Preserve in Indiana was planned as a Scenic American Landscapes series stamp. The series concluded in 2012 before it was issued. 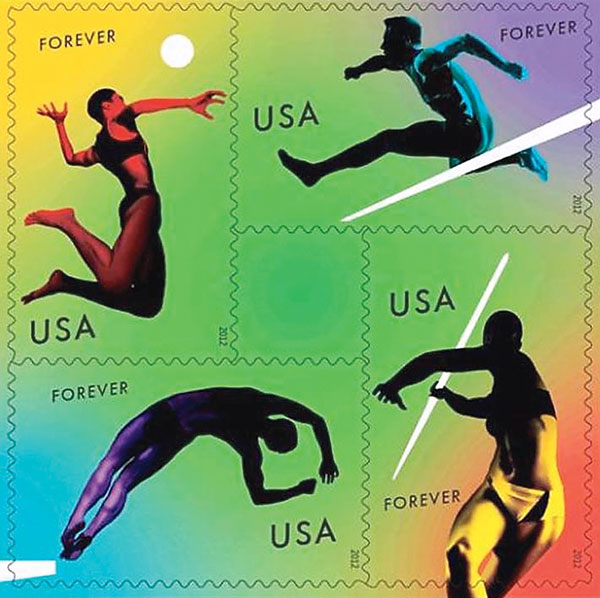 An early version of the Athletes in Motion forever stamps initially planned for issuance in 2012. The stamps are on hold, but approved, with an issue date to be determined.

A list of approved United States stamp subjects for upcoming years has been leaked to The Washington Post.

The paper published the list, attributed to the Citizens’ Stamp Advisory Committee, Feb. 20 on the website http://www.washingtonpost.com/blogs/federal-eye/wp/2014/02/20/top-secret-revealed-who-and-what-will-be-on-the-next-postage-stamps/.

The document dated Jan. 7 is marked “Confidential/Restricted Information” and was probably prepared in advance of the committee’s January meeting in Washington, D.C.

The approved subjects list is color coded to distinguish stamp subjects that are in design development, those that have had designs approved, and those that are “Not Yet in Design.” A portion of the list is shown.

U.S. Postal Service Stamp Services director Susan McGowan told Linn’s through a spokesman that the items on the published list “are subject to change.”

Some of the many planned stamp subjects revealed by the Post include entertainers Elizabeth Taylor, Johnny Carson, Elvis Presley and Michael Jackson; Distinguished Airmen; and Professional Football.

One subject without a slated issuance year is Athletes in Motion. An early image of that four-stamp block obtained by Linn’s from a Postal Service source is shown on page 11. It was originally planned for release in 2012, in conjunction with the Olympic Summer Games.

The Athletes in Motion set was canceled because the Postal Service and the Olympic committee were unable to come to an agreement on the use of the five-ring insignia associated with the Games.

Many of the 2014 stamp subjects on the list from The Washington Post were revealed previously in a May 27, 2013, Linn’s report by Bill McAllister. Never before revealed subjects on the new list include Hot Rods, a new Celebrate stamp, a Christmas Magi stamp, and a stamp with the subject of Winter.

Only the Hot Rods stamp subject is designated as having its design approved.

Not mentioned for 2014 is the rumored Batman issue for July reported in Linn’s Feb. 24 issue.

It is possible that the Batman subject was discussed after the leaked list was created.

The 2015 program appears to be close to complete, with almost 30 commemorative stamp subjects planned.

The 2015 Legends of Hollywood stamp will honor actress Ingrid Bergman.

A Lunar New Year stamp is planned for the Year of the Ram; the holiday stamp selection will also feature Christmas Carols, and a Christmas Madonna and Child stamp by Bachiacca. The Bachiacca Madonna and Child painting resides in the gallery of the Metropolitan Museum of Art.

If similar to what was shown to journalists previously as a rate-change issue, the Basket stamps will feature 10 different photos of baskets from 1850 to 1930, set against a white background.

The Bergman stamp and the Science Fiction Writers stamps were originally slated for issuance in 2013, but both were delayed.

The Steve Jobs and James Brown stamps were initially rumored as subjects for 2014, but appear to have been delayed.

Along with the planned 2015 issue for World Stamp Show-NY 2016, it is likely that additional stamps will be issued when the show takes place May 28-June 4, 2016, in New York City.

Approved stamp subjects for 2015 that currently do not have designs in the works include a Social Awareness stamp with the subject not announced.

If a postage rate change takes place in 2015, a grouping of stamp subjects has already been prepared.

No stamp subject was listed for the Priority Mail Express rate, indicating it was not yet in design.

The 2016 program has the fewest subjects slotted in, an indication of where the stamp committee is at in its planning.

Subjects on the approved design list are Love: Skywriting, Mushrooms, X-ray Flowers, a Lunar New Year stamp for the Year of the Monkey, and a “Yes, Virginia” stamp most likely intended as a holiday issue.

Subjects in development are a Legends of Hollywood series stamp honoring Elizabeth Taylor, and Global Holiday and Indiana Statehood stamps.

Stamps for the National Park Service centennial, Sesame Street, a social awareness subject and winter are listed as not yet in the design stage.

Several designs are completed for a potential 2016 rate increase.

One stamp will honor federal judge A. Leon Higginbotham Jr. in the Distinguished Americans series.

The Butterfly series stamp will show a common buckeye (previously depicted on a 24¢ postcard stamp in 2006), while a barn swallow is shown on a stamped envelope. Also planned are a biplane postal card and a U.S. Flag stamp.

Not yet in the design phase are the 2-ounce rate stamp, separate large-roll coil stamps and separate stamped envelopes with themes of “Patriotic” and “Pretty,” a presorted-standard rate Holiday stamp, and a Priority Mail Express stamp.

Existing designs that are reused for new rates might again appear in 2014, 2015 and 2016, including Wedding Cake, Wedding Roses, Yes I Do, Where Dreams Blossom, Kwanzaa, Eid, Hanukkah, Purple Heart and Neon Celebrate.

Year to be determined

Among the planned stamp subjects revealed by The Washington Post is an extensive list of approved subjects not assigned to a specific year.

Many of these subjects are slated in series.

Pop culture stamps that appear to be “blockbusters” include Michael Jackson, Dora the Explorer, Hanna-Barbera, Professional Football and Video Games. None of these subjects are in the design stage.

The American Treasures series has designs in development with no specific subject listed.

Four subjects in the Black Heritage Series were named: boxer Jack Johnson, historian John Hope Franklin, former Atlanta mayor Maynard Jackson and author William Wells Brown. Of those subjects, the Johnson stamp has a design that has been approved, while the others are not yet in the design stage.

Presidents of the United States are honored with U.S. stamps after their death, and the leaked list noted that completed stamp designs are prepared for former presidents Jimmy Carter, George H.W. Bush and William J. Clinton. Designs are in the development stage for George W. Bush and Barack Obama.

A Medal of Honor folded-pane of 20 will honor Vietnam War recipients, but the design work on this issue has not begun.

The Music Icons series has a long list of potential honorees. A design was green-lighted for Roy Orbison, and another is in development for Sarah Vaughan. Subjects listed with designs not yet completed are John Lennon, Bill Monroe, Jim Morrison, Sam Cooke, Tammy Wynette, “Fats” Waller, Freddie Fender and Willie Dixon.

Subjects in the development stage are listed as American Architecture from Colonial to CA Modern, and photographer Ansel Adams.

At the end of the list are seven subjects that have approved designs for international rate stamps.

All of these subjects were possible candidates for the Scenic American Landscapes series of airmail stamps. With the debut last year of new round global forever stamps, the Landscapes series concluded in 2012.

These subjects remain on the CSAC approved list, and there is potential that they could see issuance as stamps in the future.

The design for the Prairie Border Nature Preserve airmail stamp was inadvertently posted by the U.S. Postal Service to one of its websites a few years ago, but no new stamp was needed for the rate it was slated to cover.

The unissued airmail stamp design is pictured nearby.

Subjects approved by the Citizens’ Stamp Advisory Committee are all subject to approval by the postmaster general. Although subjects and designs are approved by the committee, it does not guarantee that a stamp for a given subject will be issued.