Brigham Canada auction series begins with Large Queens, including the 2¢ on laid paper 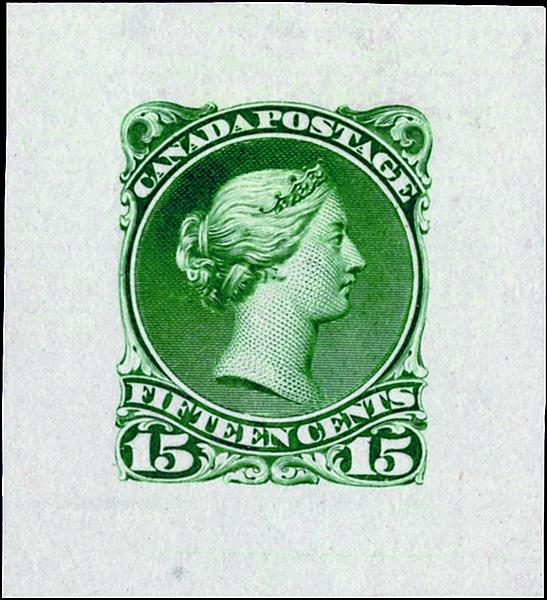 Numerous die proofs, plate proofs and trial-color proofs of the Large Queen issue are featured in the upcoming sale of the Brigham Collection, including a large trial-color die proof of the 15¢ stamp in deep green on India paper.

The 18-stamp mint multiple of the 2¢ green Queen Victoria on watermarked paper includes the full two-line watermark of E. & G. Bothwell. It will be offered Feb. 22 as part of the Brigham Collection sale. The auctioneer notes that the item is often described as the most important mint multiple in Canadian philately. 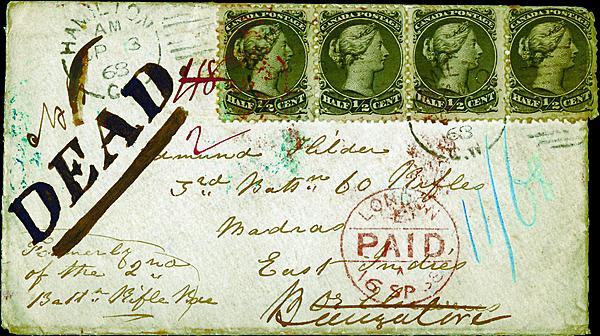 Among the postal history offerings from the Brigham Collection is this 1868 returned envelope originally mailed to Madras, India, at the soldier's letter rate, franked with four ½¢ black Large Queen stamps. 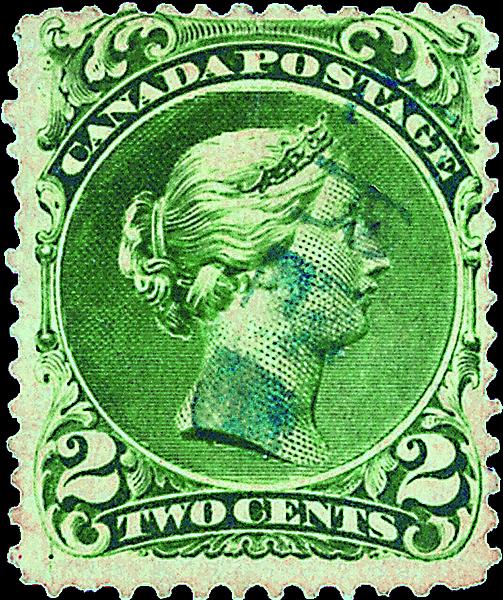 Described as Canada’s rarest stamp, this used example of the 1868 2¢ green Queen Victoria on horizontal laid paper from the Ron Brigham collection will be offered at auction Feb. 22 in Mississauga, Ontario.

The postage stamp known as Canada’s rarest will be offered at auction Feb. 22 in Mississauga, Ontario, a western Toronto suburb.

The 1868 2¢ green on horizontal laid paper (Scott 32) is the standout item in the upcoming sale of the Large Queen issue from the Brigham Collection of Canada.

Ron Brigham’s extensive championship collection of the 1868-97 Large Queen issue will be offered at the Hilton Toronto Airport Hotel and Suites, 5875 Airport Road in Mississauga. The sale will be conducted by Brigham Auctions Ltd. in association with Auktionshaus Christoph Gaertner.

With the commencement of the Dominion post office, the engraved stamps depicting Queen Victoria were placed on sale April 1, 1868, according to Winthrop S. Boggs in his book The Postage Stamps and Postal History of Canada.

Brigham considers the Large Queen collection his favorite, according to the auction catalog, “because of the uniformity in design and the variety of beautiful colours and shades of the stamps.”

Charles J.G. Verge, CEO of Brigham Auctions, told Linn’s Stamp News: “Superlatives for this collection of Large Queens are easy to come by. It has all the major rarities of the issue.

“The dream of Ron Brigham to assemble the greatest collection of Canada has been realized. It’s now time to part with it.

“He, like Bill Gross who did so for the United States, can claim to be the first and only person to have put together a complete collection of all the stamps of Canada listed in the Unitrade Specialized Catalogue of Canada.”

The key to that collection is the 2¢ green on laid paper, of which only three examples are known. All are used.

The third stamp was certified less than a year ago, as reported by Charles Snee in the Aug. 19, 2013, Linn’s.

The example from the Brigham Collection offered in the Feb. 22 auction is described as showing prominent horizontal laid lines and an attractive blue straight-line registered cancel.

“The stamp has a small shallow thin and light vertical crease,” according to the auction catalog description, “but is certainly the finest and most presentable of the three known examples of this world class rarity, universally acknowledged as Canada’s rarest postage stamp.”

The stamp’s provenance includes Ferrary, Colson, Reford, Kanee and “Bayfield.” It is accompanied by a 1935 Royal Philatelic Society of London certificate of genuineness, and offered with a presale estimate (in Canadian dollars) of $900,000; roughly converting to U.S. $804,400 in late January.

Though the 2¢ on laid paper is Canada’s top rarity, the auction also offers the unique 2¢ block of 18 stamps on paper watermarked “E. & G. BOTHWELL CLUTHA MILLS,” with the watermark showing in its entirety in two lines.

The auction catalog describes it as the most important mint multiple in Canadian philately, and it is fully illustrated with the watermark in Boggs’ 1945 book.

The block is crisp and fresh, according to the auctioneer, with full color and original gum. The block has several supports, and the left vertical pair has been reattached to its correct original location.

A significant range of important proofs includes the 2¢ and 3¢ tete-beche die proof in black on India paper, the only recorded tete-beche composite die proof in private hands, according to the auctioneer.

A 15¢ large trial color die proof on India paper in deep green is also offered, the only recorded example in this shade. The stamp was issued in gray violet.

The Brigham Collection includes numerous examples of Large Queen postal history, beginning with the strip of four ½¢ black stamps paying the soldier’s letter rate on an 1868 letter mailed at Hamilton and addressed to a private in the 3rd Battalion at Madras, India.

Though returned with a bold “DEAD” manuscript notation, the soldier was, in fact, still alive when the letter was returned.

The strip of four stamps was applied partially over the edge of the cover and has what the catalog describes as minor stamp faults. The cover is accompanied by a 2002 Greene Foundation certificate and offered with an estimate of $50,000 (U.S. $44,700).

The many Large Queen rarities and multiples in this sale are offered alongside attractive but less costly pieces that are ideal for specialized collections and exhibits.

The auction of the Large Queens is the first in a planned series of auctions of the Brigham Collection. The series will continue June 7 with the late Victorian issues, and Nov. 15 with back-of-the-book items and full sheets of all issues.

For additional information about this first auction of the Brigham Collection, visit online at www.brighamauctions.com.