Dress it up when you mail in your ballot 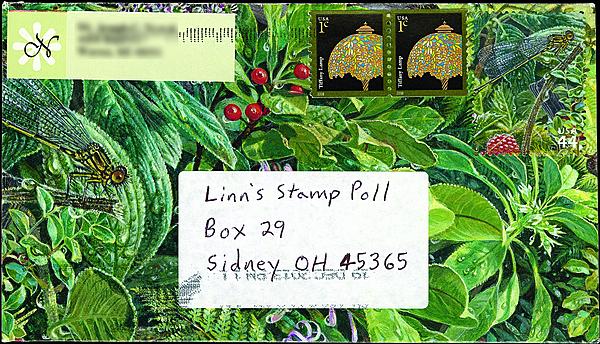 A clever reader from Ohio used a page from the United States Postal Service’s USA Philatelic mail-order catalog to fashion the envelope he used to mail in his ballot for Linn’s 2013 U.S. stamp poll.

It’s been about a month since the 2013 United States Stamp Popularity Poll was announced in the pages of Linn’s.

The ballots are steadily rolling in, both on paper and online at linns.com.

Because I get first crack at Linn’s editorial mail each morning, I can look over the ballot entries before they go to the person who does the vote tallying.

Most, as you might guess, arrive in plain, addressed envelopes.

But every so often, once or twice a week, a ballot arrives that immediately catches the eye.

Such is the case with the envelope pictured nearby, sent by a gentleman in Ohio who votes each year.

He fashioned the envelope from the front cover of the U.S. Postal Service’s mail-order catalog, USA Philatelic.

The outside of the envelope, front and back, features a montage of flora and fauna in the style of the popular Nature of America series.

At first glance, one might assume that the sender stiffed the Postal Service 44¢. However, if you look more closely at the upper right of the envelope, you will see that the sender used a 44¢ Nature of America stamp and a pair of 1¢ Tiffany Lamp coil stamps to pay the correct 46¢ letter rate.

However, the 44¢ stamp almost disappears against the camouflage of the envelope design.

A neat trick, wouldn’t you say?

As I appreciated this clever means of sending in a ballot, I remembered seeing similar envelopes in the pages of Games, a magazine devoted to crossword and puzzle aficionados, which I subscribed to for many years.

The readers of Games often would send in their entries to contests in envelopes elaborately decorated with pictures or other artwork.

Invariably, one such envelope would be illustrated in the magazine.

And that’s when it hit me: Why not do something similar in Linn’s?

You already voted? Not to worry — you can vote more than once in our poll.

So, dear reader, let your creative side loose and send in your ballot in an envelope decorated in any style you choose: paints, watercolors, colored pencils or whatever strikes your fancy.

The best envelope, in the opinion of yours truly, will be pictured in the story summarizing the 2013 poll results.

That story likely will be published sometime in April.

The Linn’s editorial staff and I look forward to seeing how you might dress up your poll mailings. n