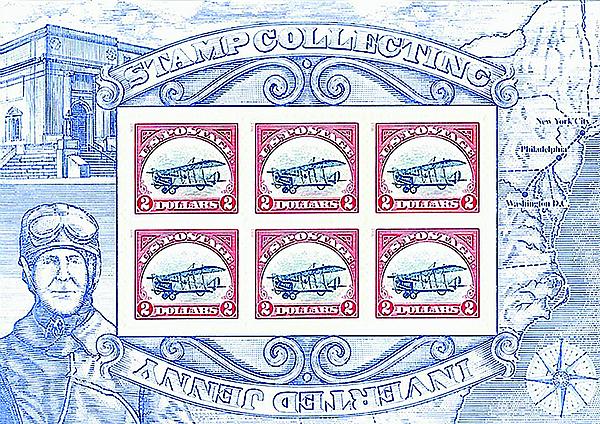 An upright $2 Inverted Jenny pane certified by the stamp grading firm Professional Stamp Experts. The pane of six stamps is one of four the firm has examined and certified. The scan here does not show the individual die cuts clearly, but they are noted

Professional Stamp Experts (PSE) of Newport Beach, Calif., told Linn’s in early January that the firm has examined and certified as genuine four panes of six stamps believed to be outside of the USPS tally.

PSE has been using the eBay online commerce site to offer free certification of the variety, which shows the Jenny biplane flying right side up.

Caj Brejtfus of PSE told Linn’s that the firm is offering free certification of the stamp variety in an attempt to catalog them all.

Brejtfus stated that the firm will certify the variety panes for no fee. The owner needs to pay return postage, though, unless the panes are dropped off and picked up at the PSE office in southern California.

“We will measure them all,” Brejtfus said, “and grade them if requested. Measuring them all for margin placement and size should make the sheets identifiable.

He said that across the print run there are minor anomalies in the consistency of print quality.

On the four examples certified, PSE identified anomalies in the red outer frame lines of the stamps, mostly affecting stamps in the top row.

These characteristics could help distinguish individual panes from each other, much in the way that individual examples of the original 100 24¢ Inverted Jenny stamps (Scott C3a) can be distinguished.

“So far we have done many regular sheets and do see consistent variations which may make the identification of pane position possible,” he added. “But with only a few inverted-inverted sheets seen to date we are still investigating.”

Brejtfus told Linn’s that not every pane examined was submitted by the original finder, so information about where the stamps were purchased is not always available.

Mercer Bristow, director of expertizing for the American Philatelic Expertizing Service in Bellefonte, Pa., told Linn’s that as of early January, the service had not examined any of the upright Inverted Jenny panes.

Bristow added that the service received a phone call from an individual claiming to have a pane they wanted examined, but it hasn’t yet been submitted.

J. Randall Shoemaker, founder and committee chairman of Philatelic Stamp Authentication and Grading in Melbourne, Fla., also told Linn’s that his firm has not examined any examples of the variety panes.

Larry Lyons, executive director of the Philatelic Foundation in New York City, said that the Foundation has not as yet had an invert variety pane submitted for authentication. The Foundation will authenticate at no cost the first pane of $2 Jenny stamps with the right-side-up plane submitted, Lyons told Linn’s.

Linn’s will continue to track the number of known upright $2 Inverted Jenny as reports are received.