FDC exhibits are on increase in numbers and in acceptance 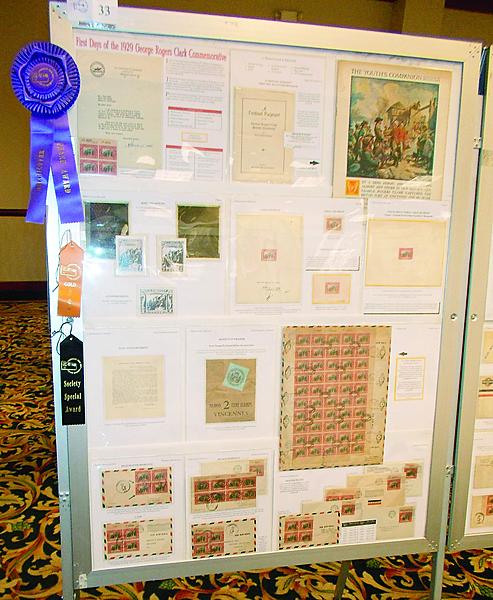 Andrew McFarlane’s FDC exhibit of the 1929 George Rogers Clark issue won the grand award at Americover 2013 and the reserve grand at the Minnesota Stamp Expo.

For years, exhibiting has been the Rodney Dangerfield of first-day cover collecting: It doesn’t get any respect — or attention.

That appears to be changing.

The talk among collectors in meetings, online groups, the American First Day Cover Society’s journal First Days and, yes, even this column, is most often about cachets and postmarks. The talk among exhibitors tends to be about stamps, postmarks and postal history.

But, first-day cover exhibiting is increasing.

Alan Warren, an accredited philatelic judge, tracked the number of FDC exhibits entered in World Series of Philately shows, plus the American Philatelic Society’s Ameristamp Expo, over the past four years. He did not include Americover, the show sponsored by the AFDCS, since exhibits entered in its competition are supposed to feature FDCs.

He found that the number of FDC exhibits more than doubled between 2010 and 2013. There was also an increase in the number of AFDCS “Best FDC Exhibit” awards at World Series of Philately shows. That award can be presented only if there are at least two FDC exhibits at a show, by different exhibitors.

In addition, two FDC exhibits, both by Andrew McFarlane, won top awards in 2013 at shows other than Americover.

McFarlane’s “The 1947 U.S. Postage Stamp Centenary” won the grand award at Okpex in October, and his “First Days of the 1929 George Rogers Clark Commemorative” (Scott 651) won the reserve grand at Minnesota Stamp Expo in July.

The latter exhibit (pictured here), which won the grand at Americover 2013, includes the largest known multiple FDC of the Clark issue.

McFarlane, Charles O’Brien III and Ralph Nafziger are currently the “big three” of FDC exhibiting. In the past five years, McFarlane has won Americover’s grand award three times, and O’Brien and Nafziger each have won once.

One reason for the increase in FDC exhibiting is Americover itself. The show’s acceptance as a World Series of Philately qualifying event guaranteed that there would always be at least one top-level exhibition that welcomed such displays.

Another reason was the broadening of the APS judging criteria to include an illustrated mail division, which allowed more emphasis on cachets, and specific judging criteria for FDC exhibits entered in the postal category.

However, the broader reason, and the impetus behind the two reasons given above, is the growing acceptance of FDCs by serious philatelists, and the effort made by APS leaders around the most recent turn of the century to make FDC collectors feel welcome in philately.

Some hurdles remain. For one, FDC exhibits are not accepted in international competition, and International Federation of Philately officials have rebuffed APS efforts to persuade them to give FDCs a chance. Also, so far, most top exhibits in national competitions are in the postal division, as studies of a single issue’s FDCs, rather than in the illustrated mail category, which allows for emphasis on cachets.

On the positive side, though there are still some demeaning comments about FDC exhibits by self-important mainstream collectors, such remarks are less frequently heard.