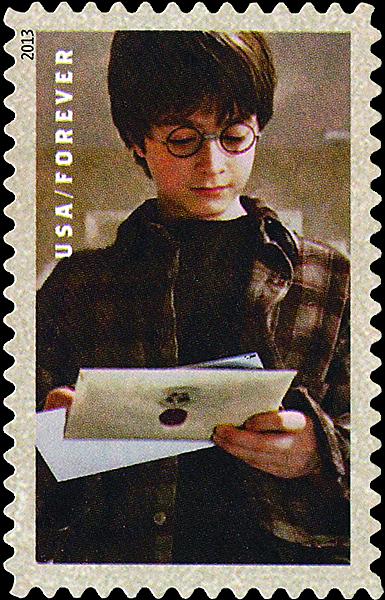 The apparent intent of the Postal Service with this issue (and others to come, no doubt) is to turn the nation’s stamps into colorful pop culture collectibles; using them on mail is of secondary importance.

Ginned up by the new marketing wizards now ostensibly in charge of the nation’s stamp program, the Harry Potter stamps are decidedly long on razzle-dazzle and achingly short on importance, historical or otherwise.

And the U.S. Postal Service should drop the pretense that the subjects portrayed on the stamps are not real individuals — just the characters from J.K. Rowling’s novels.

They are, in fact, photo stills of living people portraying those characters. To my eyes, none of the photos appears to have been retouched in any way.

In the past, however, the Postal Service typically altered facial features and so forth, so as to avoid running afoul of its and the Citizens’ Stamp Advisory Committee rule that "no living person shall be honored by portrayal on U.S. postage."

For example, on three of the four 33¢ Xtreme Sports stamps issued in 1999 (Scott 3321-24), the faces of the athletes were altered on a computer before the designs received final approval.

Such electronic manipulation allows the Postal Service to claim that it isn’t violating its sacrosanct rule about living people on stamps. But who’s being fooled here? Answer: no one.

Features may have been altered, but living people are portrayed on those Xtreme Sports stamps.

In 2011-12, the Postal Service sought to put living people on stamps, but that idea eventually was stalled by the board of governors.

But, now that the Harry Potter stamps are out there, the Postal Service ought to stop tap-dancing around the issue and simply decide that living people are going to be accorded one our country’s highest honors: portrayal on a postage stamp.

Ah, but then the fun would begin. What criteria would be used to determine who still walking among us would be worthy of such recognition?

I don’t think there can ever be a satisfactory answer to that question, particularly when history can’t properly evaluate an individual’s influence until after they are gone.

Harry Potter has been, and continues to be, a global phenomenon. And Rowling certainly is to be commended for penning a series of lively, entertaining stories that have spurred millions of kids to get excited about reading.

Goodness knows, I’ve had great fun reading them to my three daughters over the years.

But the reach of Potter and his fellow witch and wizard friends should not have extended to appearances on our nation’s stamps.

As for what other surprises might be lurking in the future of the U.S. stamp program, all I can say is: stay tuned.