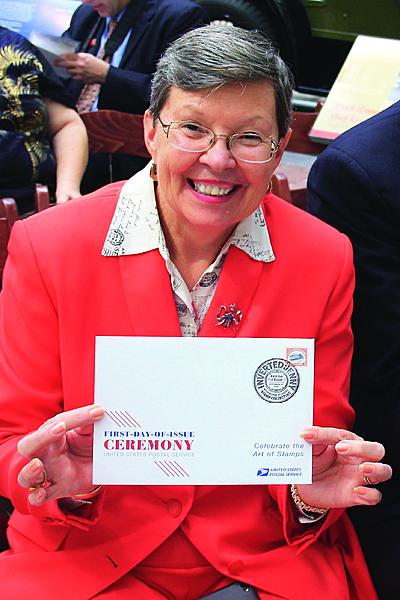 New Citizens’ Stamp Advisory Committee Chair Janet Klug: “I’m in favor of trying new things, different formats and unusual stamps. I love them all and hope the new, the fresh, the different will bring in some new collectors.”

Janet Klug, a former president of the American Philatelic Society, was confirmed Jan. 14 as the next chair of the Citizens’ Stamp Advisory Committee.

Linn’s readers received this important news the same day via linns.com, and we have a more detailed report from Linn’s Washington correspondent Bill McAllister in this issue on page 1.

A lifelong devotee of the hobby and an accomplished exhibitor, Klug will bring a passionate collector’s perspective to the committee’s deliberations.

Before heading off for her first round of meetings with CSAC and United States Postal Service officials in her new role, Klug fielded some questions from the Linn’s editorial staff.

These questions are in italics, followed by Klug’s responses.

Linn’s: What can stamp collectors expect from the new CSAC chair who is a passionate, dedicated collector herself?

Klug: I’ve been a stamp collector since I was six years old. I love stamps.

It is true when I say I never met a stamp I didn’t like. That means collectors can expect that the new CSAC chair is passionately involved in stamp selection, and will love every new stamp the USPS issues — even the ones other collectors may not like.

What collectors might find interesting is that all the members of CSAC are passionate about stamps. They may not collect them, but they love them.

Linn’s: Collectors have been highly critical of the Harry Potter stamps. What insights can you share regarding the role CSAC will play in determining future stamp issues that address popular culture?

Klug: CSAC will continue recommending stamp subjects and designs for the postmaster general. CSAC is an advisory committee; the PMG has final approval for all stamps issued.

Linn’s: With the so-called “great CSAC walkout of September 2013” in the past, how will you use your new role to work effectively with USPS Stamp Services and its more assertive marketing division? Did the walkout strengthen CSAC’s role? Why or why not?

Klug: I have no comment on any of these questions. I’m looking forward, not backward.

Linn’s: Is the size of the U.S. stamp program in coming years going to increase, decrease or remain about the same?

Klug: The number of stamps issued by the Postal Service was down a bit in 2013, and it looks like it might be about the same for 2014.

Much as I wish it were not so, the volume of first-class mail is going down. Now if we could just get everyone to start mailing letters again maybe we could have more stamps!

The collector in me says we can never have too many stamps. My checkbook (and husband) has other ideas.

Linn’s: Is CSAC/USPS Stamp Services looking at doing more unusual formats, such as the recent Medal of Honor folio, or the accordion-fold Harry Potter booklet? Will prestige booklets be resurrected? Are imperf press sheets now a permanent part of the U.S. new-issue landscape?

Klug: I was so proud of the Medal of Honor prestige folio! It was tricky trying to figure out how to get all of the names of the World War II Medal of Honor recipients to fit on the sheet along with the stamps and the selection of pictured honorees.

Thanks to the design geniuses who worked on the project, I thought it came out beautifully.

I’m in favor of trying new things, different formats and unusual stamps. I love them all and hope the new, the fresh, the different will bring in some new collectors.

Linn’s: Do you have any additional comments/perspective that you wish to share with Linn’s readers?

Klug: I understand that not all collectors love every stamp that comes out.

I share my ‘educated guesses’ with the USPS. However, the USPS customer base is broad, and the Postal Service would like to make it broader and more inclusive, with products that appeal to everyone.

We collectors are incredibly important to the USPS, but we are not the USPS’ only customers.

My hope is that collectors will understand that the Postal Service tries very hard to have a variety of attractive, interesting stamps so all of its customers will find something they like.

From where I sit, Klug’s appointment is a positive sign that Postal Service officials appreciate that the nation’s stamp program cannot be reinvigorated solely with glitzy marketing campaigns and intentionally created rarities such as the upright Jenny Invert sheet.

Will there be more such limited-edition items in future stamp programs?

Klug’s crystal ball apparently is no better than my own: “I don’t know,” she said.