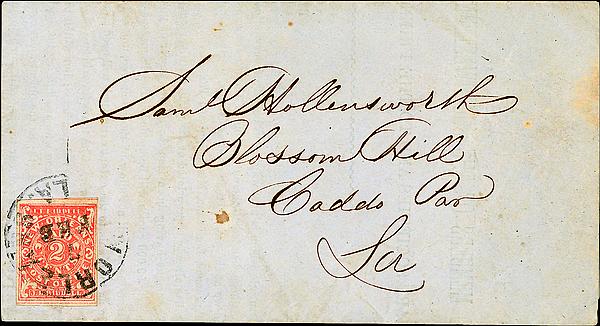 The Feb. 3-5 Schuyler Rumsey auction in San Francisco will include this 1861 circular mailed from New Orleans to Blossom Hill, La., franked with the 2¢ red postmasters’ provisional stamp without marginal inscription.

Among the many items from the Richard Graham collection of free franks is this 1791 cover bearing Alexander Hamilton’s signature at lower left, endorsed “Treasury Department” and mailed to Boston.

An extensive range of United States and Confederate postal history will be featured in the Feb. 3-5 Schuyler Rumsey auction, including free franks from the Richard Graham collection, campaign covers from the Tom Alexander collection, exposition and fair covers, regular issues and more.

The sale will take place in the firm’s galleries at 47 Kearny Street in San Francisco.

Numerous usages of postmasters’ provisionals are offered, including an 1862 blue folded printed circular mailed from New Orleans to members of the Southwestern Bible Society. This example was addressed to Blossom Hill, La., and is franked with the 2¢ red provisional stamp prepared in June 1861 by New Orleans postmaster J.L. Riddell (Scott 62X2).

The auctioneer’s description explains that the 2¢ red stamps presumably were the first of the provisionals printed, and did not include the marginal inscription “Usable exclusively in the New Orleans Post Office” that appeared on the subsequent 2¢ blue and 5¢ issues. The 2¢ red stamps weren’t used until January 1862, when the 2¢ blue stamps were sold out.

Mailed at the circular rate, the cover includes a “New Orleans La. 7 Feb” circular date stamp. The auctioneer notes a couple of “unnoticeable” stamp flaws, describing the cover as very fine and attractive. It is accompanied by a 2005 Philatelic Foundation certificate.

The value for the stamp on cover, as listed in the Scott Specialized Catalogue of United States Stamps and Covers, is $25,000. The cover in the Rumsey auction is offered with an opening bid of $4,750.

Richard B. Graham (1922-2012) was known by many as the dean of U.S. postal history. For decades he authored a weekly column on the subject for Linn’s Stamp News, and he also contributed valuable information to the Chronicle of the U.S Classic Issues and The American Philatelist.

A 1791 free frank cover from the Graham collection bears the signature of Alexander Hamilton, from the period of his service as the country’s first secretary of the treasury under President George Washington. The folded letter, addressed to Nathaniel Appleton of Boston, is docketed “rec’d 22d Jany /91” and is struck with a Philadelphia Jan. 12 Franklin mark and a “Free” rating handstamp.

A segment of the sale highlighting state postal history encompasses more than 260 lots, including several prestamp covers from the District of Columbia.

The Schuyler Rumsey postal history auction can be viewed with descriptions online at www.rumseyauctions.com. Online bidding is also available.