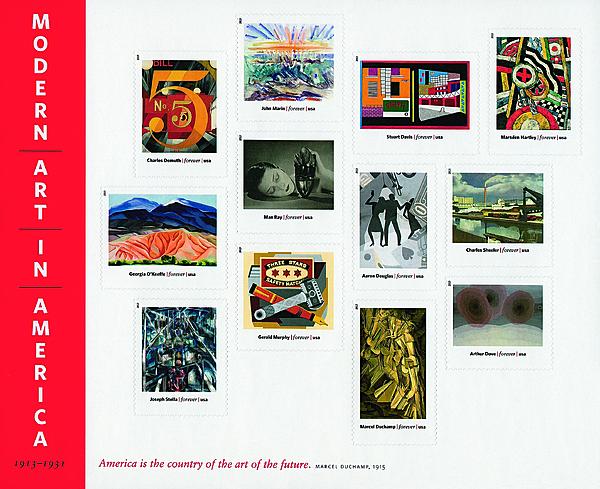 Figure 2. Used singles from panes with se-tenant stamps, such as the U.S. 2013 Modern Art in America pane, can be tough to come across. As such, Scott editors are increasing their catalog values. 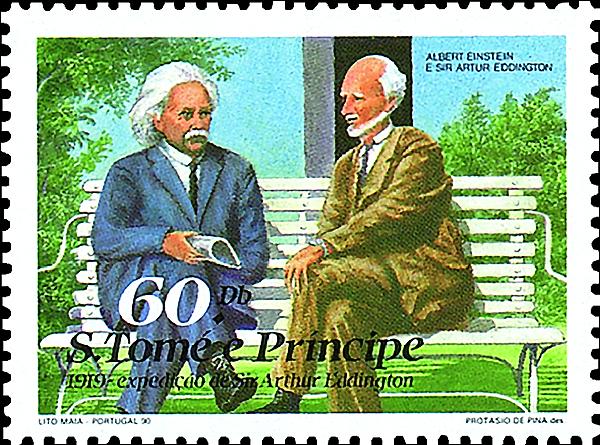 When Albert Einstein published his general theories of relativity in 1916, his brilliant scientific reasoning and complex mathematics led him to conclude that light from distant stars would be deflected by massive objects like the sun. The only problem with that statement was that it was merely a prediction; he didn’t have the empirical evidence that proved that it was so.

In 1919, an expedition led by astrophysicist Arthur Eddington went to Prince Island, just north of the equator off the west coast of Africa, to observe a solar eclipse that perhaps would confirm Einstein’s prediction.

After all the careful measurements were reviewed, Einstein’s prediction was found to be quite accurate. This obscure fact-finding mission was commemorated on a 1990 set of stamps from St. Thomas & Prince Islands (Scott 912-914). Figure 1 shows the 60-dobra stamp from the set depicting Einstein and Eddington seated on a bench.

When compiling the new-issue listings, the Scott catalog editors, at times, suspect something, but don’t have the empirical evidence to back it up.

Over the past 20 years or so, the number of stamps being issued by all of the various countries has ramped up considerably. In the Jan. 21, 2013, issue of Linn’s, I examined this acceleration of stamp issuance with a simple calculation: dividing by two the last number assigned in the postage section of a country currently issuing stamps, then looking up that quotient in the same country to see what year that result’s number was issued.

Many recent Scott numbers are assigned to full panes of stamps containing a number of different stamps, with each stamp given its own minor-letter listing. An example is the U.S. Modern Art in America pane (Scott 4748) shown in Figure 2. It is logical to assume, therefore, that it might be much more challenging for collectors to readily obtain used examples of each different stamp issued in 2013 than for the stamps issued in 1973 or 1983, when far fewer stamps were issued.

Back then, too, much more of the yearly mail volume was franked with stamps.

Since then, first-class mail volume has dropped significantly with the increased use of electronic messaging, and much of the mail received by Americans at home is not franked with canceled stamps. Instead, it is most likely to be franked with some sort of meter indicium, or have a “postage paid” indicator printed on the envelope. Even mail bearing a stamp created for presorted mail is seldom seen in mailboxes anymore.

Obtaining information on modern used stamps has always been rather challenging for the Scott editors because most dealers of modern items are selling unused material almost exclusively.

While the Scott editors certainly believed that obtaining used stamps from such panes was becoming more challenging, like with Einstein’s theory of relativity, it took a while before confirmation came from dealers that this was indeed the case.

Catalog editor emeritus James Kloetzel, who is regularly in contact with a number of dealers of U.S. stamps, recently received that confirmation from some dealers.

One dealer, Jim Dempsey of A&D Stamps and Coins, told Kloetzel that he was regularly selling used singles from se-tenant self-adhesive commemorative issues at prices ranging from 20 percent to 300 percent above the stated catalog values, which usually were at the 25¢ minimum catalog value.

Dempsey also said that obtaining quantities of any of these stamps from a wholesale source was quite difficult.

He noted that at one time there were about a dozen firms handling bundles of 100 used stamps of the same type, and now there was only one, and that firm was swamped with orders.

As a result of these and other dealer comments, used single stamps from se-tenant self-adhesive commemorative issues will be valued in the Scott catalog based on the number of stamps in the se-tenant multiple.

Definitive stamps will not be affected by these changes.

The various Flag stamps doled out at the post offices to customers who don’t care what stamp they get will continue to be set at minimum catalog values as new issues.

Stamps created for rates that are less frequently utilized are always a bit more challenging to value as used. Most of those stamps are generally set at values greater than the catalog minimum.

While this change affects only U.S. stamps, the editors also have noticed the same thing happening with stamps from other countries. These countries also are issuing more stamps than they have in the past, and collectors are finding it far more difficult to find many of these recent issues used on mail.

During the past dozen years, new stamp listings for an ever-increasing number of countries have shown used values equal to the unused values.

Prior to that, used values for new stamps for many countries usually were placed at 50 percent, or an even lower percentage, of the unused value.

As postal administrations around the world keep creating postage stamps primarily intended for collectors’ albums instead of postal use, we’ll undoubtedly see more of a convergence of used and unused values.