Shirley Chisholm broke new ground for herself and others 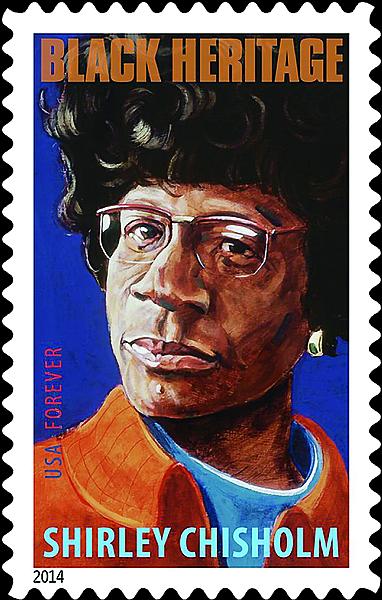 The United States Shirley Chisholm forever stamp to be issued Jan. 31 in Brooklyn, N.Y. This commemorative is part of the long-running Black Heritage series.

A United States stamp honoring New York Congresswoman Shirley Chisholm (1924-2005) was issued Jan. 31. The new commemorative is the 37th stamp in the Black Heritage series that began in 1978.

The nondenominated (49¢) forever stamp was issued in Brooklyn, N.Y., Chisholm’s birthplace and home to the district she represented in Congress for seven consecutive terms.

The first-day ceremony was scheduled for 11 a.m. at a New York City landmark: the Brooklyn Borough Hall at 209 Joralemon St.

The design of the new stamp features a painting by Robert Shetterly of Chisholm against a deep blue background.

The inscription “Black Heritage” appears across the top of the design, with the name “Shirley Chis­holm” along the bottom.

Ethel Kessler served as the U.S. Postal Service art director for the project.

Chisholm was elected to the 91st Congress in 1968, representing her native Brooklyn in New York’s 12th Congressional district.

Born Shirley Anita St. Hill in the Bedford-Stuyvesant neighborhood of Brooklyn on Nov. 30, 1924, Chis­holm graduated with honors from Columbia University and worked as a teacher while pursuing her master’s degree in childhood education, which she earned in 1952.

After serving in the New York state legislature, she became the first black woman elected to the U.S. Congress, doing so in 1968.

She served on the Veterans Affairs’ Committee, the Education and Labor Committee and on the powerful Rules Committee, and as secretary of the Democratic caucus.

She was a candidate for the Democratic presidential nomination in 1972, the first black candidate from a major party, and received 152 delegate votes.

Throughout her congressional career, Chisholm was a respected and outspoken voice for the people of her district.

“She was a fierce advocate for women’s rights and democracy, and a staunch opponent of the Vietnam War,” said Rep. Barbara Lee, D-Calif. Lee introduced House resolutions in 2007, 2009 and 2011 to encourage the issuance of a commemorative stamp honoring Chisholm.

Chisholm retired from Congress in 1983. She was married twice: to Conrad O. Chisholm, a marriage that ended in divorce in 1977; and to Arthur Hardwick, until his death in 1986. She had no children.

Brooklyn’s Shirley A. Chisholm Post Office Building at 1915 Fulton St. and Howard Avenue in Bedford-Stuyvesant was named for the late congresswoman following her death in 2005.

Press sheets, both with and without the die cuts that normally separate individual stamps, were produced in a quantity of 2,500 of each type. A sheet consists of 10 panes of 20 stamps and sells for $98.

The pictorial first-day cancel includes an image of the U.S. Capitol. It will be available at the first-day ceremony and by mail.

A first-day digital color postmark resembling a political campaign button will be offered on a Postal Service envelope for $1.64.

Technical details and first-day cancel ordering information for the Shirley Chisholm stamp are in the boxes on pages 10 and 11. Collectors have a 60-day grace period to mail in requests for the first-day postmark.