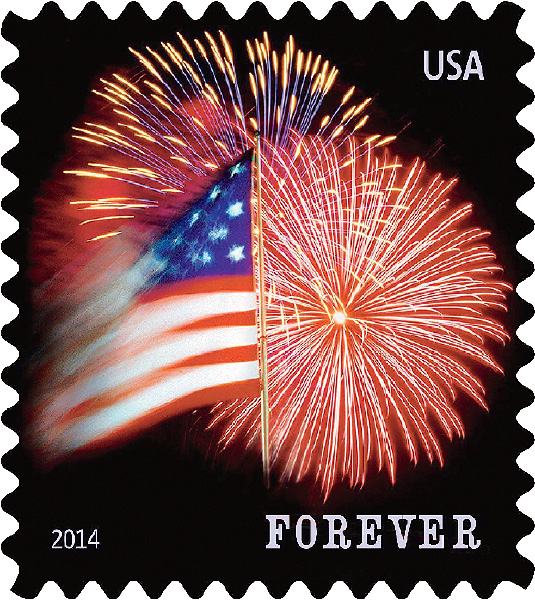 No ceremony is planned, but an Independence, Mo., first-day postmark is available.

The stamp design features a modern nighttime photograph by Gary Clark of fireworks over Fort McHenry National Monument and Historic Shrine in Baltimore.

USPS spokesman Roy Betts told Linn’s that an “ATM format is not currently needed nor scheduled.”

Other contractors will print this same stamp design, and those varieties are scheduled for March.

It might take a while for local post offices to stock the new stamps. An announcement in the Jan. 23 issue of the USPS Postal Bulletin indicated that there would be no automatic distribution of the new stamps to post offices.

Post offices that want to carry the stamps must specifically request them from their designated stamp distribution office.

Collectors who want to obtain the new stamps soon after the issue date can order them through the USPS Stamp Fulfillment Services division by telephoning 800-782-6724 and using the item numbers assigned to each variety, as provided in the technical details box on this page.

After the bombardment of Fort McHenry during the War of 1812, Francis Scott Key wrote a poem that later became the national anthem. The National Park Service’s website for the monument says: “After 25 hours of continuous bombing, the British decided to leave since they were unable to destroy the fort as they had hoped. Realizing that the British had ceased the attack, Key looked toward the fort to see if the flag was still there. To his relief, the flag was still flying! Quickly, he wrote down the words to a poem which was soon handed out as a handbill under the title Defence of Fort McHenry. Later, the words were set to music, and renamed The Star Spangled Banner. It became a popular patriotic song. It was not until March 3, 1931, however, that it became our national anthem.”

Nondenominated (49¢) Star-Spangled Banner stamp; double-sided pane of 20 and coils of 100

Coil of 100 by Ashton Potter

Standard ordering instructions apply. Collectors requesting first-day cancels are encouraged to purchase their own stamps and affix them to envelopes. The first-day cover envelopes should be addressed for return (a removable label may be used), and mailed in a larger envelope addressed to Star-Spangled Banner Stamp, Independence Station, 301 W. Lexington Ave., Independence, MO 64050-9998. Requests for first-day cancels must be postmarked by April 2.

The Postal Service’s first-day cover for the Star-Spangled Banner stamp is item No. 689016 for the booklet stamp and 789916 for either coil stamp, at 93¢ each.