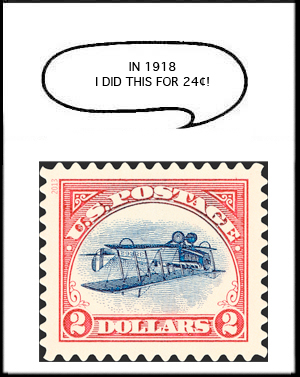 Warren Mullisen of Culver City, Calif. is the winner of the January cartoon caption contest. The stamp is the 2013 $2 Jenny Invert stamp. The next contest will be announced in Linn's Mar. 10, 2014.

This stamp drew twice as many entries as most of the U.S. Stamp Notes contests have received in the past.

This is evidence that the iconic image of the original upside-down airplane stamp is part of the lore of philately, and that anyone who might have forgotten it was reminded by the massive United States Postal Service publicity surrounding the new stamp.

Part of that publicity was about the artificial variety created by the Postal Service: 100 of the six-stamp panes were produced and randomly distributed with the airplane flying upright.

This was the focus of most of the entries in the January contest.

Robert Anderson of York, Pa., captured the situation well with this entry: "First I was worth more upside down. Now I'm worth more right side up. No wonder I'm confused!"

Another popular class of entries was centered on the predictable effect on plane and pilot of flying upside down.

The first, from Steve Kotler of San Francisco, Calif., speaks to the Postal Service's motivation for denominating the stamp at $2: "The Postal Service has finally figured out a way to empty our pockets more quickly!"

Another approach, concentrating on mail delivery, is represented by "Did the postmaster general seriously think letting mail fall out of the plane could eliminate door-to-door delivery" sent in by Edwin Lugowski Jr. of Lansing, Ill.

A third theme drew multiple entries that engaged in a bit of whimsy by wondering what role a popular recipe might play in the scene.

Representing this group is Joel Meyerson of Annandale, Va., whose line is, "Mama...break out your upside-down cake recipe: I'm dusting the pineapple patch tonight."

The winners for this contest reflect in few words on the causes of the plane being inverted.

One word v "Gesundheit!" – is all it took for Robert Wolf of Montgomery, Ill., who wins the nonphilatelic portion of the contest.

"Attempting the hiccup cure got me into a philatelic pickle!" by Rosemary Harnly of Red Wing, Minn.

"Before I do another roll-over, I'm hiring a money manager!" sent by Gilbert Schaye of New York, N.Y.

The next cartoon caption contest will be announced in the March 10 Linn's.