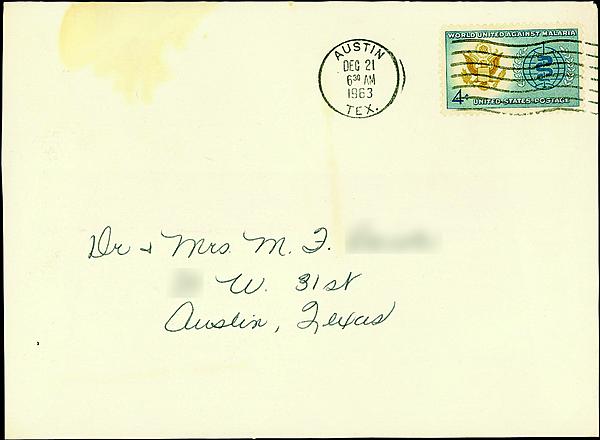 Figure 3. The 4¢ Malaria Eradication stamp correctly fulfills the mailing fee for this unsealed Christmas card mailed Dec. 21, 1963. The 4¢ rate in this instance applies to a single-piece third-class mailing of up to two ounces. 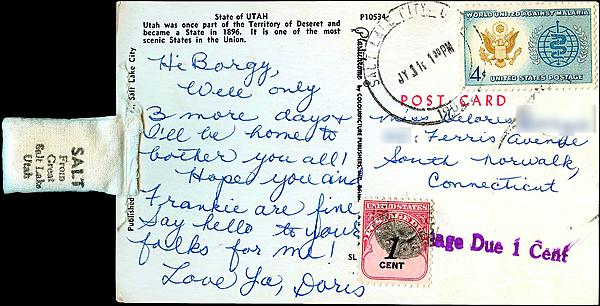 Figure 2. This postcard required 5¢-per-ounce letter-rate postage because of its thick attachment. Mailed July 11, 1963, and franked only with the 4¢ Malaria Eradication stamp, the postcard was assessed 1¢ postage due, which was paid by 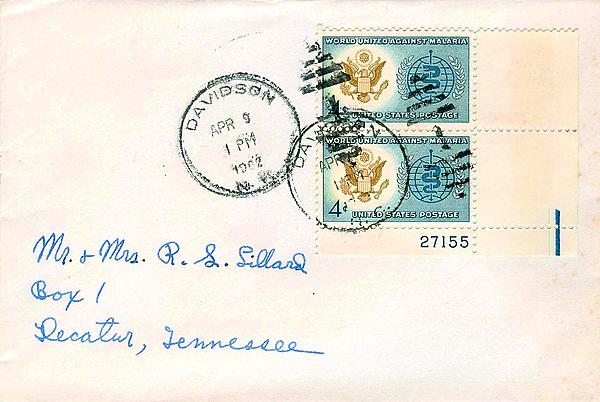 Figure 1. This letter weighing up to two ounces was mailed April 9, 1962, at the 4¢-per-ounce domestic surface first-class letter rate. The envelope is franked with two of the United States 1962 4¢ Malaria Eradication stamps.

In my Modern U.S. Mail columns in the Aug. 9, 2010, and Sept. 13, 2010, Linn’s Stamp News,I described commercial uses of the 3¢ 1948 Oregon Territorial issue, a stamp about which an excellent first-day cover exhibit has been formed.

It is expected that any well-developed FDC exhibit must now show a significant grouping of commercial uses of the stamp or stamps being shown. In those columns I emphasized how difficult it is to locate such commercial uses, and that many years of effort are necessary in order to do this.

This becomes even more true when the stamp being collected was issued in the 1960s, the 1970s, and even more so in the 1980s and later.

To a certain extent this is because it is not profitable for dealers to carry this type of material in their stock.

In addition, there was less and less effort taken to accurately frank modern uses when they were mailed, even by stamp collectors.

Finally, as the years pass, there are so many issues being produced by every country, including the United States, that uses of any one particular issue become more difficult to locate.

Recently, I have been made aware of another FDC exhibit that is being developed, of the United States 1962 4¢ Malaria Eradication stamp (Scott 1194).

The owner of this exhibit has been aggressively searching for uses of this issue for years, and I was astounded by what he has found — so much so that over the next two columns I’ll show seven of these uses.

Figure 1 illustrates a domestic use mailed April 9, 1962. This letter of up to two ounces was mailed at the 4¢-per-ounce domestic surface first-class letter rate. It is franked with two of the 4¢ Malaria Eradication commemoratives.

The July 11, 1963, domestic postcard in Figure 2 required the 5¢-per-ounce letter rate postage because there was a thick attachment: a souvenir salt pack from Utah’s Great Salt Lake.

The handstamp “Postage Due 1 Cent” and the canceled 1¢ carmine rose postage due stamp (Scott J89) both indicate that 1¢ was due and paid by the addressee in order for the postcard to be delivered.

Finally, the Dec. 21, 1963, envelope in Figure 3 was correctly mailed with 4¢ franking for an up-to-2-ounce single-piece third-class item because the envelope was unsealed and carried a Christmas card. The single 4¢ Malaria Eradication stamp paid the postage.

All three of these domestic uses of the 4¢ 1962 Malaria Eradication stamp are special, found only because of unusual effort on the part of the collector.

To complement these three excellent domestic use examples, the next Modern U.S. Mail column will describe four international usages.