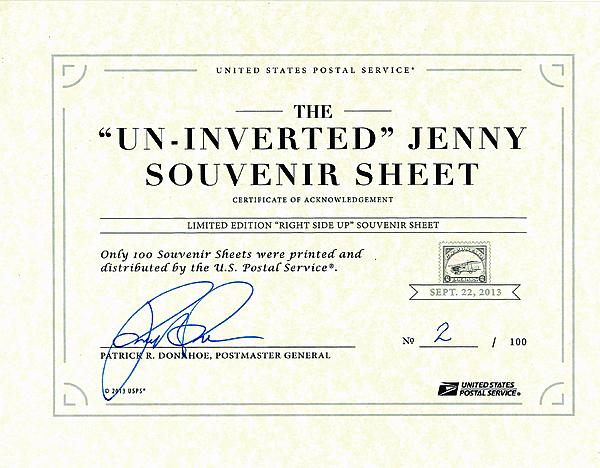 The postmaster general signed this USPS certificate that was sent to the finder of the invert variety pane. The document identifies the pane as the second reported to the Postal Service. 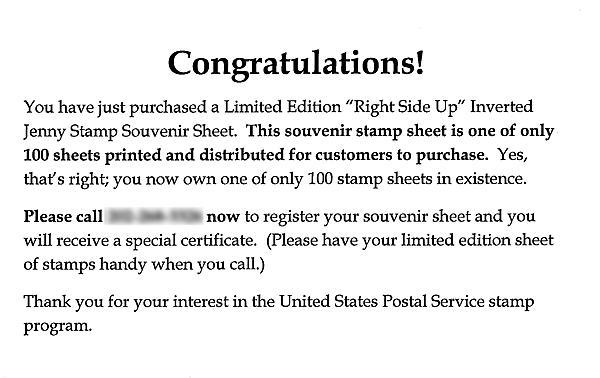 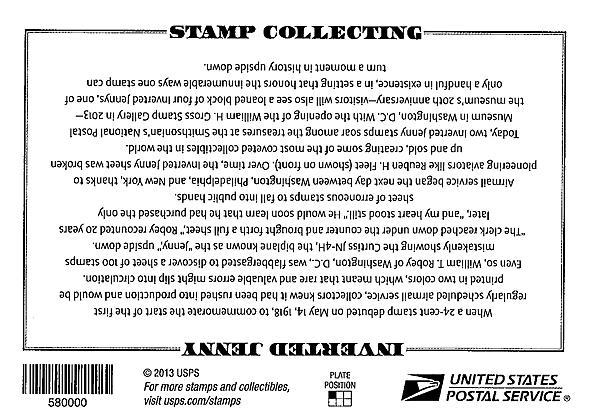 The pane position diagram on the reverse of the recently sold $2 Inverted Jenny pane variety indicates the pane is from the upper left location, position 1 on the press sheet, when counted from left to right and top to bottom. 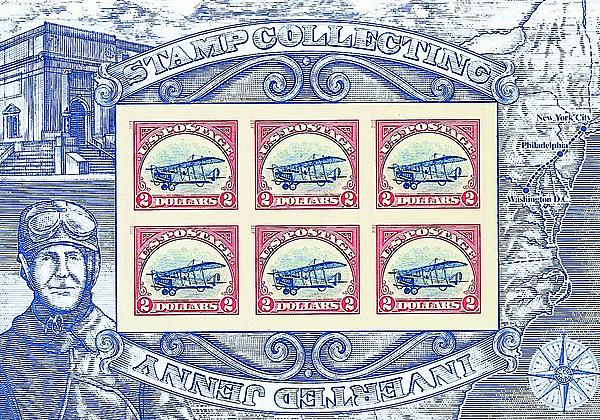 This pane of six of the intentionally created variety of the United States $2 Inverted Jenny stamp with the biplane flying right side up recently sold for $25,000. Though difficult to see in this image, the six stamps in the pane do have die cuts.

One of the first four Upright Inverted Jenny panes reported to the United States Postal Service has traded hands for $25,000. Now the lucky California collector who found the intentionally manufactured variety is going on vacation.

This is the first report of one of the scarce variety panes being traded in the marketplace.

As reported in a separate article on page 29, of the 100 randomly distributed variety panes depicting the Jenny biplane flying right side up, four examples, in addition to the four reported to the Postal Service, have been certified genuine by Professional Stamp Experts, bringing to eight the number of known panes found.

Collector Fred Everett of California was the second person to report he had purchased one of the variety panes of six. He bought the pane through USPS Stamp Fulfillment Services.

Everett was quoted by the Postal Service: “I’ve been a stamp collector all my life, and this by far is the most treasured addition to my collection.

“I now have a unique stamp sheet that’s coveted by stamp collectors the world over.”

The insert card for the variety is also shown on this page, at bottom left. This card tells how to contact the Postal Service to report the find. A similar blank card is found in the normal Inverted Jenny blind packaging.

Also shown on this page is the certificate obtained by Everett that identifies the pane as the second reported to the Postal Service.

In early January, USPS spokesman Mark Saunders told Linn’s that Everett sold his pane for $25,000, and that he is planning to take a vacation to either Australia or Europe.

Malamud told Linn’s that for now he plans to hold onto the pane to see how many come to market. His firm has advertised interest in buying the invert variety pane in Linn’s and other outlets.

The Postal Service manufactured only 100 panes of the invert variety, out of the 2.2 million standard issue panes printed. The varieties have been seeded randomly throughout the entire distribution of the stamp issue.

As reported in the Jan. 13 Linn’s, three other finds have been reported to the Postal Service. The first find was made by a collector in Canada, who bought his pane through the Postal Service’s store on the eBay Internet commerce site.

The third and fourth pane purchases were reported in Illinois and New York, respectively.

The Illinois find was by “a Chicago coin collector who purchased one from a postal customer in Georgia,” according to the Postal Service.