This unused horizontal strip of four of the U.S. 1847 5¢ Benjamin Franklin stamp will be offered in the Spink auction with a presale estimate of $28,400. 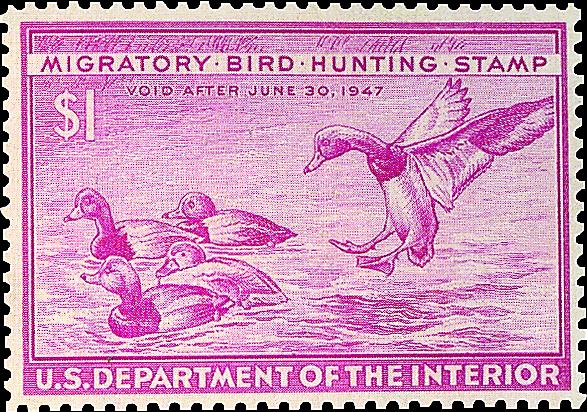 An example of the rare bright rose pink color error of the 1946 $1 federal duck stamp will be auctioned during the Jan. 29-30 Spink sale in New York City.

A 20th century rarity and a 19th century classic are highlights of the Collector’s Series auction from Spink.

Also known as a federal duck stamp, this unusual rarity is a variation from the standard red brown color for this issue.

The auctioneer reports that only one block of 10 stamps has been found of this 68-year-old error, and of those, seven are held by the Smithsonian National Postal Museum in Washington, D.C.

As a result, only three examples are available to the collecting community.

The postal museum refers to the error as one of the most spectacular color errors of the federal duck series.

“The Bureau printed well over two million of the stamps in reddish brown,” the museum said, “but somehow a few printed in rose red escaped detection. While sunlight and exposure to chemicals can change a stamp’s color, experts agree that neither could have caused this dramatic variant. Hence, it is a true error.”

The error is listed in the Spink catalog with the Scott Specialized Catalogue of United States Stamps and Covers value of $35,000.

The auctioneer describes the item as showing a fresh color and clear impression on bright paper that still retains its original bluing.

The strip has a horizontal crease, but presents an extremely fine appearance, according to the catalog description.

The strip is accompanied by a 1967 Philatelic Foundation certificate. It is listed in the Spink catalog with a value of $28,400+, a calculation of the Scott catalog value for an unused strip of three plus an unused single. (The Scott catalog lists a strip of four, but provides a value for a used example only.)

The stamp is listed with the value of $140,000 found in the Scott Classic Specialized Catalogue of Stamps and Covers 1840-1940.

The stamp is struck by a six-ring target postmark and boasts a strong color and impression, according to the auctioneer’s description.

It is also described as “completely free of faults,” while most examples are “quite defective or heavily repaired,” the auctioneer notes.

Information about these and upcoming Spink auctions is available online at www.spink.com; a link connects to Spink USA for details.