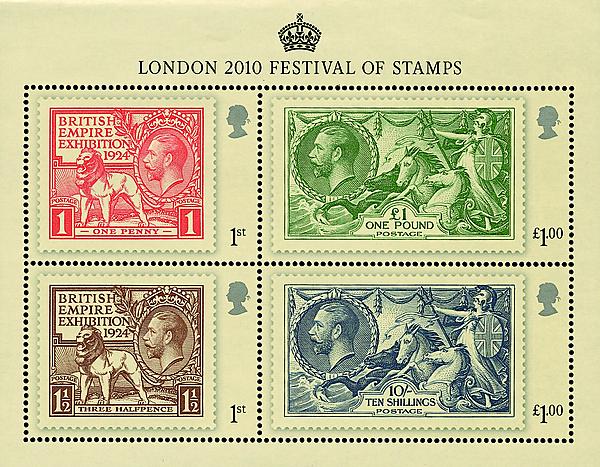 Figure 3. In 2010, Great Britain’s Royal Mail issued a stamp-on-stamp design in a souvenir sheet for the London Festival of Stamps using the Wembley stamp design 86 years after its creation. 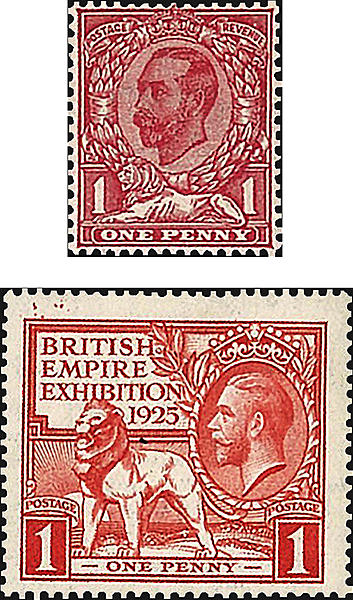 Figure 2. The 1-penny Downey head stamp (top) issued in 1911 shows a lion in a reclining position under the portrait of the king, while the lion on the 1d Wembley commemorative issued in 1925 (bottom) stands proudly in front of the king‘s profile 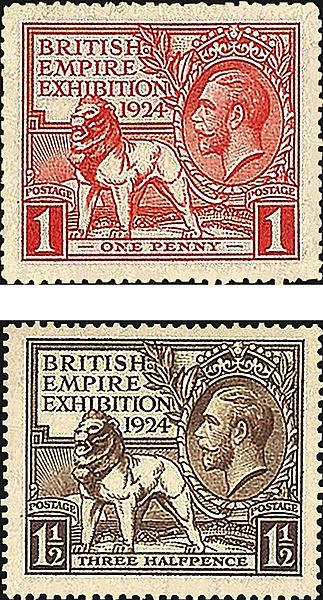 The two stamps are shown in Figure 1. Collectors call them Wembleys, because they commemorate the British Empire Exhibition held in Wembley Park in northwest London.

Compared to other countries, Great Britain was late in issuing commemoratives. The United States issued its first commemorative stamps 31 years earlier, in 1893, with the 16-value Columbian Exhibition set (Scott 230-245).

The intent of the exhibition was to be a morale booster for the British Empire after World War I. Its official stated purpose was “to stimulate trade, strengthen bonds that bind mother Country to her Sister States and Daughters, … [and] to enable all who owe allegiance to the British flag to meet on common ground and learn to know each other.”

At that time, 58 countries made up the empire, and all but two, Gibraltar and The Gambia, participated.

The exhibit by Canada included a representation of the Prince of Wales, later King Edward VIII, modeled in butter.

The exhibition was extended to a second year. The same stamp designs were used with the date changed from 1924 to 1925.

Prior to the exhibition, the post office let the king know it wanted to issue pictorial stamps to promote the event. The king, himself a philatelist, expressed strong opinions against commemorative stamps. He derided them as “funny” and “un-English.”

Nevertheless, the king gave his qualified consent. He sent word by his secretary that “if it is to be done at all, it should be done properly.”

The post office invited design submissions from eight artists and received 16 proposed designs. A design by Harold Nelson was selected.

Nelson’s design features the head of the king that had been used on the Seahorses stamps first issued in 1913 (Scott 173-176 and 179-181) and a lion standing proudly astride rolling countryside with the sun’s rays radiating above the sea behind it.

Designer Nelson said, “My intention was to give the animal a somewhat statuesque appearance … ”

This might have been prompted by the negative reaction of the public 13 years earlier. The 1d Downey head, one of the first stamps issued for the new monarch in 1911, had a lion couchant, that is, reclining, under George V’s three-quarter portrait. This stamp is shown at bottom in Figure 2.

Critics felt the reclining lion looked lazy, was an unworthy symbol of British might and was an insult to the monarchy.

Nelson’s design for the Wembleys did not have unconditional acceptance at the time.

The Stanley Gibbons stamp firm commented in its July 1924 journal, “ … while the Wembley stamps may be good business from the propaganda point of view, the philatelic prestige of our country’s stamps has certainly been lowered by their appearance.”

Despite early lack of acceptance, the Wembleys have become regarded by stamp collectors as British classics. They were showcased by Royal Mail in 2010 with a stamp-on-stamp issue at the London Festival of Stamps. Figure 3 shows the souvenir sheet (Scott 2792a).

Britain’s first commemorative stamps differed in size from the definitives and high values issued over the 80 years prior to them. The stamps are 25 millimeters high and 29½mm wide.

The new size stamps did not match the comb perforating machinery that Grover & Co. Ltd. used for other stamps, so a line perforator, gauge 14, had to be substituted.

Characteristic of line-perforated stamps are small, somewhat irregular, perforation holes. These can be seen on the 1d stamp at top in Figure 1.

The small perforation holes caused problems for stamps made into coils for dispensing from coin-operated vending machines. The post office pressed Grover to manufacture a suitable comb perforating machine, which it did.

The perforations created by a comb perforator are characterized by larger, more regular holes as seen on the 1½d denomination in Figure 1.

Little known and rarely seen by collectors are examples of the 1924 and 1925 Wembley stamps that were made into coils for dispensing by coin-operated, self-service vending machines strategically placed around the exhibition grounds.

Stamps of both denominations for both years were made up into rolls from sheets. Every 10th stamp had a coil join, a 2mm strip of selvage glued to the back of the next stamp, to form a continuous roll of 1,200 stamps.

The initial line perforation rolls did not always work properly in the vending machines, so the method of perforation had to be changed from line to comb to enable them to be dispensed from the machines.

Stamps originating from coils can be recognized by several features. The coil join is one feature.

Another is that the top or bottom of individual stamps has a rough edge caused by the machine’s internal, serrated separating knife or by the two gripper pins that held the coil roll in place while the dispensed stamps were torn from the roll by the buyer.

Examples of Wembley issue stamps, either mint or used, originating from coil rolls vended by machines are scarce and rarely seen by collectors.