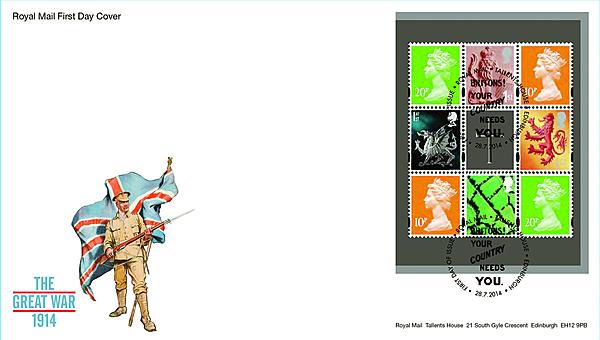 A pane of definitive stamps from Great Britain’s World War I prestige booklet to be issued July 28 is shown on a Royal Mail first-day cover. 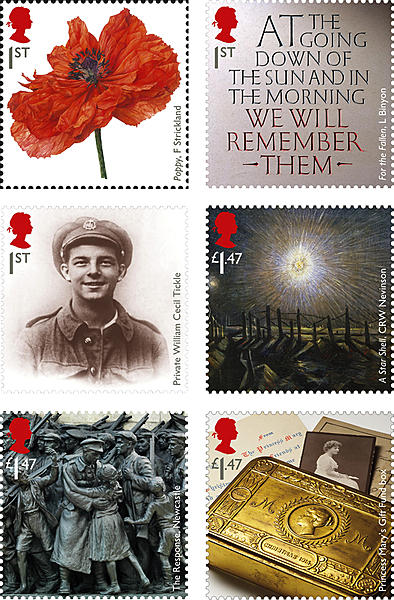 The first six stamps in Great Britain’s World War I series feature a painting of a poppy, a poem written in 1914, a private who volunteered at the age of 15, a painting of the war, a war memorial and a gi

The booklet contains text and illustrations in addition to stamps.

In announcing the first set of stamps, Royal Mail said: “The First World War was an event without precedent in history and touched every household in Britain, either directly (with family members killed, injured or lost in action) or through the immense social changes it triggered.

“The centenary of this conflict is being marked by Royal Mail with a series of 30 stamps to be released over the next five years.

“Each year of the war will be commemorated by a set of six stamps, exploring six visual and thematic strands: poppy, poetry, portraits, war art, memorials and artefacts.”

Three of the stamps in the first set are nondenominated with the inscription “1st” to indicate that they pay the first-class rate, currently 62 pence.

These stamps feature Poppy, a painting by Fiona Strickland; For the Fallen, a 1914 poem by Laurence Binyon;and a photograph of Pvt. William Cecil Tickle.

Royal Mail commissioned the painting by Stickland, a botanical artist, and also commissioned stone cutter Gary Breeze to engrave the words from Binyon’s poem for the stamp design.

Tickle was only 15 when he enlisted Sept. 7, 1914, just a little over a month after Britain declared war on Germany on Aug. 4.

Despite being underage, Tickle joined the 9th Battalion of the Essex Regiment. After training he was deployed to France and was one of 420,000 British soldiers killed during the Battle of the Somme in 1916.

Shortly after the end of the war, his mother Elizabeth Tickle donated his photograph to the Imperial War Museum.

According to an article published by the British newspaper The Daily Mail, his mother said at the time: “I should like to feel I can tell my friends that he is there with all his comrades. He was only a boy but, God love him, he well did his duty.”

The other three stamps are denominated £1.47, the rate for letters to Europe weighing up to 60 grams.

One stamp reproduces A Star Shell by Christopher Richard Wynne Nevinson. This painting is in the Tate Britain in London.

The art museum’s website provides the following description: “In this apocalyptic image, an exploding shell illuminates the battlefield like a star. Nevinson had been closely associated with the Futurist and Vorticist movements, which celebrated the machine age, but his wartime paintings bear witness to the destructive power of technology. Here the man-made explosion lends the landscape a visionary quality. This is almost certainly one of the works Nevinson painted in 1916, after he was invalided out of the Royal Army Medical Corps.”

Another stamp shows a war memorial in Newcastle by William Goscombe John. Called The Response, this sculpture also is known as the Renwick memorial as it was commissioned by Sir George and Lady Renwick.

In the sculpture, more than 30 bronze figures of Northumberland Fusiliers volunteers are leaving home for war.

The boxes included writing materials, a Christmas card and a photograph of the princess. For those who smoked, tobacco and cigarettes also were included.

According to the website of the Imperial War Museum, the 17-year-old princess originally intended to pay for a gift for each soldier and sailor out of her own personal allowance, but because that was impractical, the princess launched a Christmas Gift Fund Oct. 15, 1914. The appeal was successful, raising more than £162,000.

The firm Hat-trick designed the stamps.

International Security Printers printed them by offset in six sheets of 50, sold in panes of 25 at most postal outlets. Each stamp is square, 35 millimeters by 35mm, and is perforated gauge 14.5.

Joh. Enschede of the Netherlands printed the prestige booklet.

Among the booklet’s 24 pages are four panes of stamps. In addition to one pane each of the three new first-class stamps and the three £1.47 stamps, it contains two panes of definitive stamps.

On one of the definitive-stamp panes, a £1 Queen Elizabeth II Machin Head stamp is surrounded by eight reproductions of the King George V 1-penny stamp, which was widely used on mail to and from soldiers in 1914.

The other pane contains eight stamps: two 10p and two 20p Queen Elizabeth II definitives and four nondenominated first-class country definitives showing a crowned lion for England, a dragon for Wales, a lion rampant for Scotland and farm fields for Ireland. A label in the center of the pane reproduces the cross that appears on Commonwealth war graves.

Imperial War Museum historian Matt Brosnan wrote the text, and many of the images in the booklet also are from the museum.

Other products to be offered in conjunction with the WWI stamps include first-day covers, six postcards reproducing the designs of the stamps, and a presentation pack including the stamps and text by Ian Kikuchi, providing an overview of the political and economic context within which war broke out in 1914 and the course of events during the war.

The presentation pack also has a quick response (QR) code that links to the Imperial War Museum’s WWI centenary website,www.iwm.org.uk/centenary.